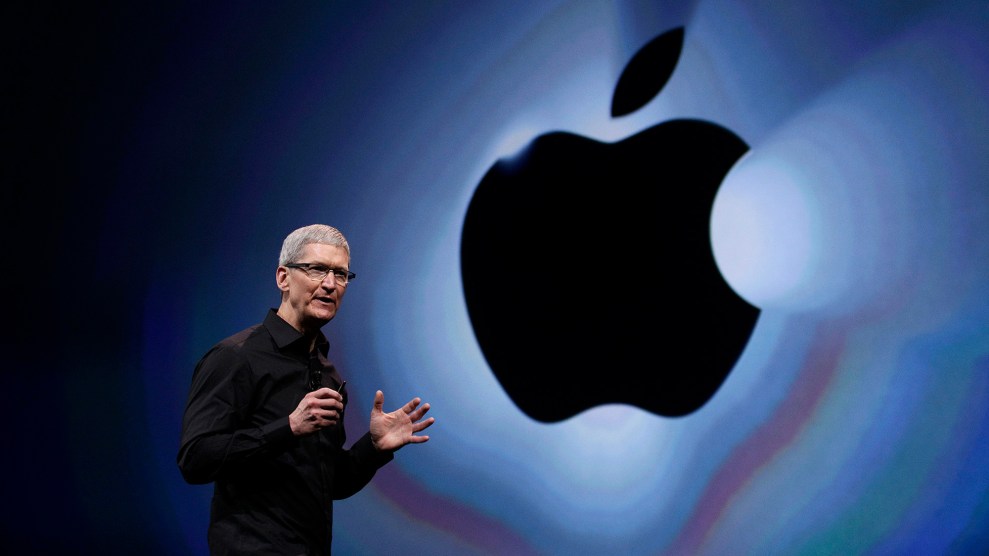 In a landmark ruling handed down on Tuesday, the European Commission ordered Apple to pay $14.5 billion in back taxes to Ireland. The commission found that Ireland’s tax arrangement with Apple, set up in 1991, was a sweetheart deal that violated the European Union’s antitrust statutes and amounted to illegal state aid.

The ruling, while significant, is just a speeding ticket for the tech giant. Apple’s stock is valued at $570 billion, and it holds more than $230 billion in cash, more than 90 percent of which is kept offshore, beyond the reach of the IRS. The EU ruling implies that the company has been holding as much as $115 billion in profits tax-free in Ireland. That’s more than half of the profits Apple has stashed in its offshore subsidiaries, according to its latest financial filings.

Apple has a long and colorful history of tax minimization, having been deemed both a “pioneer” and a “poster child” of stashing corporate profits beyond the reach of tax collectors. In 2003, Apple paid an effective tax rate of just 1 percent on its profits from selling iPhones and iPads outside of the United States. By 2014, that effective tax rate was just 0.005 percent—or $50 in tax for every $1 million in profit.

Cook claimed that Apple is the largest taxpayer in the United States, Ireland, and the world.

Despite Ireland’s 12.5 percent corporate tax rate, Apple’s arrangement with the country allowed it to split its international profits between its Irish branch and a head office that existed only on paper. The company paid the already-low Irish rate on the profits it attributed to Ireland and allocated the rest to this phantom, stateless company, which is untaxable. According to CNN Money, Apple made 16 billion euros (roughly $22 billion) in international profits in 2011, attributing less than 50 million (just below $70 million) to its Irish branch. The rest was funneled through the tax-immune, employee-free “head office”. Via this arrangement, Apple has been able to shift up to two-thirds of its global profits to Irish-registered companies, paying an effective tax rate of one percent or less.

Nevertheless, Apple has roundly condemned the European Commission ruling, with CEO Tim Cook penning an open letter decrying it. Cook said that the “vast majority” of Apple’s profits are taxed in the United States, and claimed that Apple is the largest taxpayer in the United States, Ireland, and the world.

Verifying those claims isn’t easy. A 2014 report on corporate taxation by Citizens for Tax Justice omitted Apple due to the company’s “implausible geographic breakdowns of pretax profits.” In other words, it is very likely that profits Apple claimed in Ireland were actually earned in the United States, making it difficult to confirm Apple’s tax assertions. In particular, CTJ raised an eyebrow at Apple’s US tax rate. Apple claimed to have paid a 36.5 percent effective tax rate on its American profits from 2008 to 2012, even though the highest corporate tax rate is 35 percent. Using Apple’s 2015 filings, CTJ found that the company claimed its most recent tax rate was 46.7 percent. (Apple did not respond to a request for comment.)

An Irish Times list of the country’s top taxpayers in 2016 gave the number one spot to the pharmaceutical group Medtronic, though Apple placed in the top ten. And as to Cook’s claim that the “vast majority” of Apple’s profits are taxed in the United States, Matthew Gardner, the executive director of the Institute on Taxation and Economic Policy, says that statement contradicts information in Apple’s own annual report.

The ruling implies that Apple has been holding as much as $115 billion in profits tax-free in Ireland.

Ireland may not be the only beneficiary of the European Commission ruling, which allows for other countries to partake of the penalty, including cash-strapped EU countries like Greece, as well as the United States. According Gardner, the decision provides a jumping-off point for the United States to recoup back taxes from Apple, which he estimates has avoided close to $70 billion in US taxes.

Yet the official US reaction to the ruling has been largely negative. The Treasury Department expressed disappointment, saying that the assessment was “unfair” and “contrary to well-established legal principles.” Last week, the department warned the European Commission against pursuing American companies for tax avoidance, on the grounds that clawback penalties could harm American efforts to collect taxes from domestic companies with international operations. Even though Apple’s $14.5 billion tax bill represents more than a third of Ireland’s total tax revenue and more than the entirety of Ireland’s annual health spending, Irish Finance Minister Michael Noonan has promised to appeal the ruling.

Google, Facebook, and Microsoft also hoard profits in Ireland, benefiting from its so-called “double Irish” tax structure, an arrangement which Ireland has promised to phase out by 2018. European competition regulators are currently investigating tax deals awarded to McDonald’s and Amazon by Luxembourg, as well as Anheuser-Busch InBev’s arrangement in Belgium. Tax deals given to Fiat/Chrysler (incorporated in Luxembourg) and Starbucks (incorporated in the Netherlands) were found illegal by the European Commission in October.

Even if the EU ruling stands, tax havens will not go away overnight. Fortune 500 companies have an estimated $2.4 trillion in offshore holdings, avoiding up $695 billion in US taxes. While President Obama has criticized corporate inversions, the process by which corporations move their headquarters offshore, Congress has been slow to act. The Treasury Department’s reaction indicates that that is unlikely to change.

Still, European regulators aren’t waiting around for American support. EU bodies are actively investigating possible anti-competitive behavior and tax avoidance by Google, Facebook, Amazon, and Netflix, with penalties expected to be announced sometime in the fall. Google is facing tax probes in Spain, Italy, and France, all of which claim the company should have declared more profits and paid more taxes. As James Wentworth, the vice president for Europe at the US-based Computer & Communications Industry Association, a tech lobbying group, tells the Wall Street Journal, “It’s an avalanche coming.”