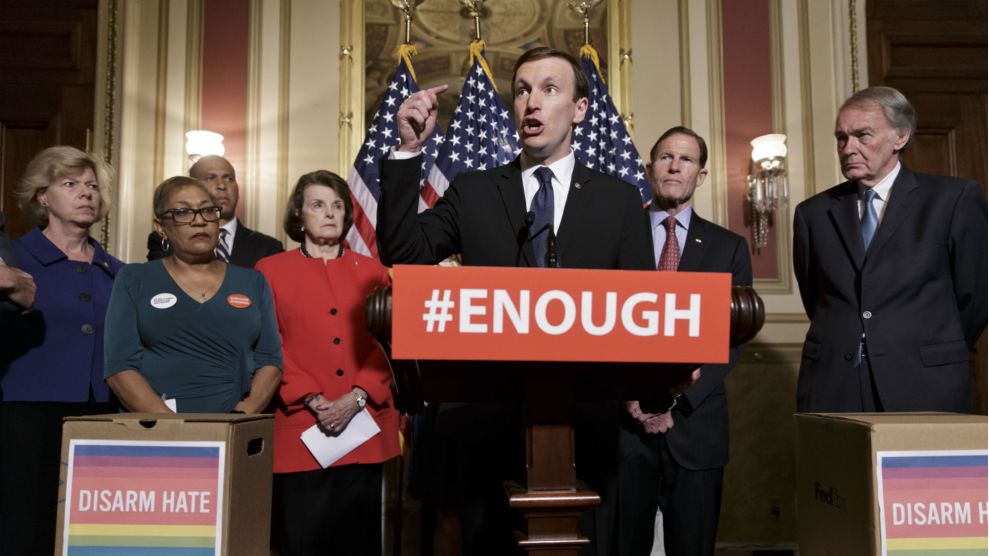 Nearly four years ago, the junior US senator from Connecticut was thrust into a national tragedy when a gunman killed 20 children and six adults at Sandy Hook Elementary School in Newtown. Since that day, Sen. Chris Murphy has been among the leading voices in the Democratic Party for gun control. In June, he conducted a 15-hour filibuster that helped gather nearly every Senate Democrat for a sit-in and drew widespread media coverage. Mother Jones spoke recently with Sen. Murphy about his efforts on gun violence, the fraught presidential election, and his plans to keep taking on the gun lobby.

Mother Jones: The Sandy Hook massacre was a major turning point for you. How do you think things have changed in the anti-gun-violence movement since?

Chris Murphy: My career in Congress is a story of before Sandy Hook and after Sandy Hook. I have a connection to this issue because of my experience that day and my friendship with many of the families that has tragically developed. I will consider my time in the Senate a failure if we don’t pass some meaningful legislation to reduce the likelihood that Sandy Hook ever happens again. I think we have made remarkable progress, but you have to put that progress in context. The anti-gun-violence movement was essentially asleep from 1994 to 2012, and during that time, the gun lobby built up enormous political power. We’ve been organizing during the modern era of the anti-gun-violence movement for three and a half years. During that time, we’ve had some successes in states like Connecticut and Washington. We have moved the needle in Congress—anti-gun-violence measures get more votes, and more Republican votes than they did a few years ago. And we’ve built an activist base that is growing daily, that is hopefully going to have some impact in the fall elections.

MJ: Your filibuster in the Senate after the Orlando mass shooting drew national attention. Talk about your decision to do that.

“At some level, Trump is more radical than the NRA. In the wake of Orlando, he was calling on people to walk into bars fully armed as a means to prevent future tragedies.”

CM: I was standing with my kids when I saw the news of what had happened in Orlando, and I got this sinking feeling of dread, knowing that I was going to return to Washington and be part of a script that had become devastatingly familiar—tweets of thoughts and prayers, a moment of silence, calls on the Republican majority to do something, a rejection of those demands from Republican leadership, and then silence. I couldn’t be part of that script again. I was very uncertain as to whether the filibuster would be meaningful, but I just couldn’t stand by and do the same thing that I had done in the wake of all these previous tragedies. I’m glad that it led to us getting some votes. I think those votes will be impactful this fall, as voters get to see where their member stands on issues like keeping guns from potential terrorists. I think it helped energize the movement. I think there’s a lot of people who care about this issue at a different level because of the filibuster and because of the action [regarding the terrorist watch list] that it helped inspire in the House of Representatives a week later.

MJ: Do you have any specific plans for introducing gun control legislation in this session?

CM: My energy right now is on the elections. I’m raising money for candidates who are going to help us tip the balance on this issue.  If we have a president who asked for a mandate on combating gun violence, as Hillary Clinton is requesting, that’s going to be really impactful. I will certainly defer to her when it comes to the exact pace and content of legislative action, but I expect it will be at the top of her agenda. It will certainly be at the top of mine.

MJ: How do you see this playing out if there is a Trump presidency?

CM: It would be devastating for the country if Donald Trump won, and it would be devastating for the anti-gun-violence movement. But we would be on a long list of progressive causes that would be shattered by a Trump win. Donald Trump has embraced the NRA. At some level, he’s more radical than the NRA. In the wake of Orlando, he was calling on people to walk into bars fully armed as a means to prevent future tragedies. Even the NRA had to distance themselves from the proposal to mix open carry with drinking. So this is a high-stakes election for this movement, in part because we’ve been building and building, and 2016 feels like a moment where the country is going to weigh in on whether they want progress or whether they are okay with the silence that has been the hallmark of the Republican majority.

MJ: You’ve been really vocal on Twitter about some of Trump’s remarks—one that comes to mind is your tweet after he said “the Second Amendment folks” might be able to do something about Hillary Clinton.

CM: I don’t know whether Trump meant it or if it was a joke, but you have to think not about what you mean but about what people hear. He has a lot of unstable people at those rallies. He has a lot of supporters with a deep hatred of Hillary Clinton and access to incredibly powerful lethal weapons. Frankly, when you twin the language of assassination threats with his suggestion that a Hillary Clinton electoral victory would be illegitimate, it scares the hell out of me. I’m worried about what somebody’s going to do between now and the election. The way that Donald Trump talks suggests that his supporters should take matters into their own hands should this election be stolen from him, as he calls it.

“I’ve listened to Republicans say over and over again that we should focus on enforcing the laws that we have. The great hypocrisy of that statement is that they are deliberately handcuffing the enforcement agency that oversees current law.”

MJ: What do you think it will take to get any kind of gun control legislation through?

CM: We didn’t pass a law, but there are more Republicans who are speaking out against the NRA than ever before, including unlikely Republicans—people like Lindsey Graham. There are more people who care about this at a grassroots level than ever before. Republicans are going to have to come to the conclusion that there’s a political price for standing against 90 percent of their constituents to stand with the gun lobby. Some of that will be dictated by the results of this election. If [lawmakers] lose elections in part because of their votes on the background-check bill or their position on the terror gap bill, then there will be a rethinking of this issue within the Republican conference. So there are a handful of races that a lot of people are going to be watching.

MJ: Is there anything in the works to change the policy on federal funding for research on gun violence as a health epidemic?

MJ: It’s no secret that the Bureau of Alcohol, Tobacco, Firearms and Explosives (ATF) lacks the resources it needs to carry out its mission. Any plans on the horizon to beef them up?

CM: It’s on the list. There’s going to be a breaking point where Republicans either join our efforts because they realize they have to in order to win elections, or they retrench because they fundamentally don’t believe the politics of this issue have changed. If they join us, there’s a number of things that we need to get done. I’ve listened to Republicans say over and over again that we should focus on enforcing the laws that we have. The great hypocrisy of that statement is that they are deliberately handcuffing the enforcement agency that oversees current law. So they are totally insincere when they say we should enforce the laws that we have, because they’re unwilling to fund the ATF and they’ve passed restrictions on the way in which the ATF can conduct enforcement actions.