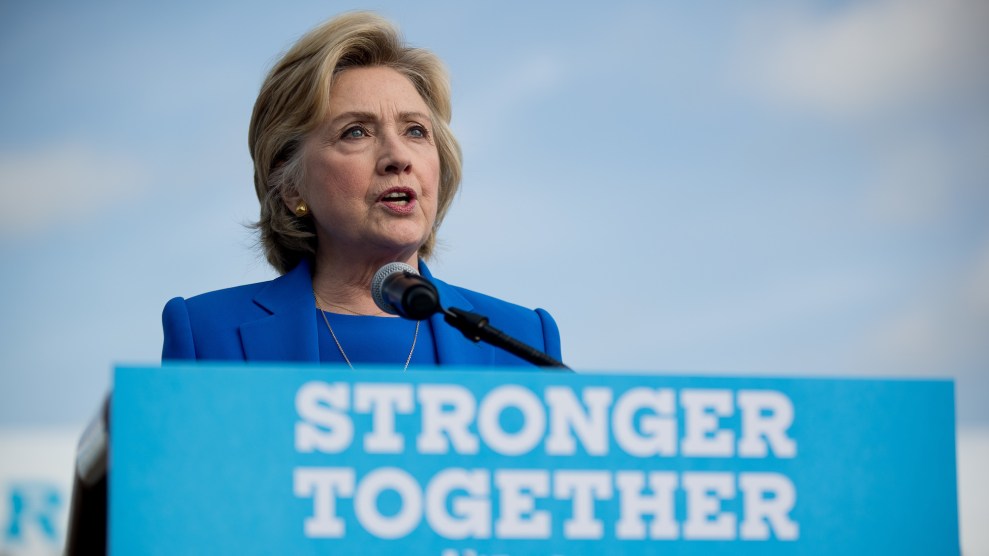 At her first press conference all year, Hillary Clinton on Thursday morning took repeated pokes at Donald Trump and spoke about what she called the media’s “disparate treatment” of her and the celebrity mogul.

The presser came the morning after a candidate forum on national security matters that was moderated by NBC’s Matt Lauer, who was widely criticized afterward for being tougher on Clinton than Trump. During that event, Trump repeatedly praised Russian strongman Vladimir Putin and refused to talk about his “secret” plan to defeat ISIS—points that Clinton hammered during the morning-after press conference. Trump’s proposal to ban Muslims from entering the United States was a “gift to ISIS,” she declared. The former secretary of state noted that numerous Republicans have called Trump an “unacceptable” choice for president and contended that he is unqualified and temperamentally unfit for the job.

Clinton pointed to Matt Olsen, the former head of the National Counterterrorism Center, who published an article slamming Trump in Time this week. In the piece, Olsen writes:

In recent months, ISIS has made clear that it’s closely following this election, too—and it has chosen a candidate. Interviews with ISIS members and analysis of social media, including in a recent Foreign Affairs article by Mara Revkin and Ahmad Mhidi, make it clear: “ISIS is rooting for Trump.” …

Trump’s comments undermine our counterterrorism efforts around the world. By demonizing Muslims, he feeds ISIS’s narrative that the U.S. is at war with Islam…The bottom line is this: Trump’s erratic and belligerent slogans are no substitute for policies based on facts and sound judgment. That’s why, in my view, Hillary Clinton is the clear choice for national security.

Asked whether she believed that she has been on the short side of biased media coverage during the campaign, Clinton referred to “disparate treatment” and noted she found it “frustrating.” She declined to cite sexism as the reason, but she noted that political scientists and journalists will have plenty of material to study for years to come. Clinton remarked that the political press “may not know how to respond to [Trump’s] behavior.” She dismissed an arguably sexist tweet issued by GOP chairman Reince Priebus that criticized her for not smiling enough during the forum, explaining that she was discussing serious matters. “I am not asking for any special treatment,” she added. “I know the road I’ve been on. I’ve been on it for 25 years.”

During the press conference, Clinton displayed policy know-how and showed flashes of personality. She adeptly used most queries to raise pointed questions about Trump. The event raised an obvious question of its own: Why did she wait so long to start doing this?