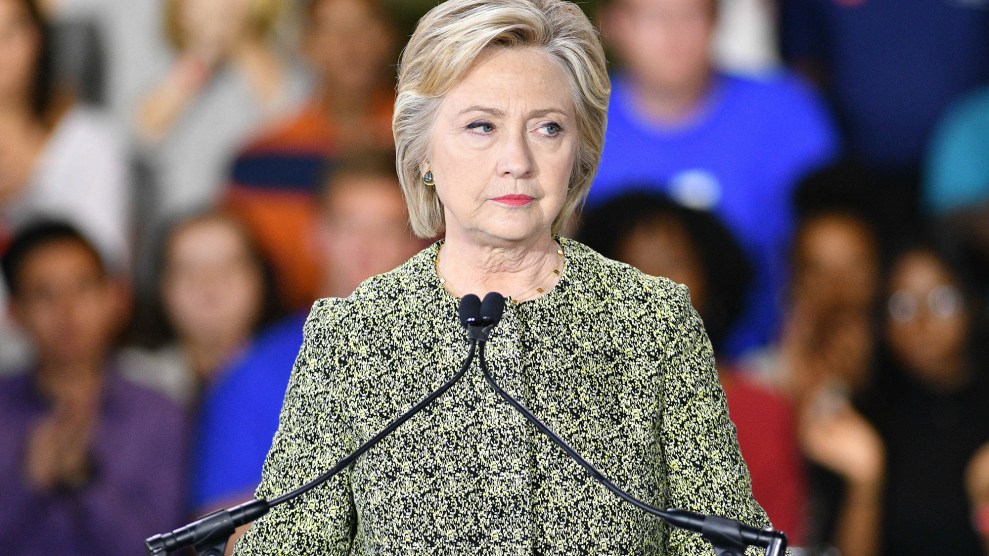 The Trans-Pacific Partnership, the comprehensive free-trade deal that’s been attacked by all parties in the presidential campaign, has one real shot at becoming law: if Congress passes it and President Barack Obama signs it in the lame-duck session after the November election. So a coalition of progressive groups is applying all the pressure it can on Hillary Clinton to come out strongly and unambiguously against the lame-duck passage of the TPP.

With Congress currently trying to cobble together a spending compromise before the end of the month so its members can leave town and hit the campaign trail, there’s no chance of passing the TPP before the election. But backers of the 12-nation agreement are hoping for a vote on it in December, when retiring and defeated members of Congress might be more willing to back the trade deal before the new Congress and administration arrive in January.

It’s hard to see the TPP being finalized if it doesn’t happen by the time Obama leaves office. Donald Trump has made opposition to trade deals a centerpiece of his campaign. Clinton has likewise said she wouldn’t support the TPP as president. But there’s been enough inconsistency in her stance to worry progressive groups that are staunchly opposed for fear that the deal would hurt American manufacturing and blue-collar workers.

As secretary of state, Clinton supported the partnership, although its details had yet to be worked out. But she backed away from it during her presidential campaign once the negotiations ended and became increasingly firm in her opposition during her primary against Sen. Bernie Sanders. After a close ally, Virginia Gov. Terry McAuliffe, suggested during the Democratic National Convention that she’d come around and approve the deal, Clinton said in August, “I oppose it now, I’ll oppose it after the election, and I’ll oppose it as president.”

Still, progressive groups don’t entirely trust her. They are concerned that she hasn’t definitively, unequivocally spoken out against a vote during the lame-duck session. “Those were really helpful words,” says Murshed Zaheed, political director of CREDO, a progressive mobile phone company with a political advocacy wing. “But we thought the issue was that really didn’t get to the point of whether or not she’s against the process of the lame-duck vote.”

Last month, eight groups including CREDO sent a letter to Clinton asking her to publicly oppose a lame-duck vote on the TPP. “It is now more important than ever that the country, the Congress, and President Obama hear specifically that you oppose a vote on the job-killing TPP after the election,” read the letter, which was also signed by Communications Workers of America, Democracy for America, 350 Action, Demand Progress, Fight for the Future, Friends of the Earth Action, and Public Citizen.

The Clinton campaign has neither responded to the letter nor issued a statement about a lame-duck vote. Zaheed said he had an initial conversation with a campaign staffer about these concerns prior to the letter but has heard nothing since sending it. “It’s unclear to me whether Secretary Clinton is really sincere about her opposition to TPP,” Zaheed says. “If she really is sincere about her opposition to the TPP as it is, if she really intends to lead against the TPP as it is, then she would come out and offer a definitive statement on whether she is for or against the idea of holding a lame-duck vote for TPP.”

Clinton has already implied that she opposes passage of the TPP during the lame-duck session, responding to a question about a lame-duck vote in a May questionnaire, “I have said I oppose the TPP agreement—and that means before and after the election.” For Zaheed, that answer is not adequate. “The best thing she can do right now to stop this corporate power grab is to publicly and expressly oppose a vote during the lame-duck session,” he said. Zaheed and other activists want Clinton to be a prominent and proactive voice against a lame-duck TPP vote in the coming months.

Congressional leaders have generally tamped down speculation of a lame-duck TPP vote. Last month, Senate Majority Leader Mitch McConnell (R-Ky.) said it “will not be acted upon this year,” and House Speaker Paul Ryan (R-Wis.) said, “As long as we don’t have the votes, I see no point in bringing up an agreement only to defeat it.” Rep. Steny Hoyer of Maryland, the House Democratic whip, told a videographer from CREDO last week that “it’s not going to come to a vote.”

But the president hasn’t given up hope. Earlier this month, Obama brought together a bipartisan conference—featuring Ohio Gov. John Kasich, former New York Mayor Michael Bloomberg, and former Treasury Secretary Henry Paulson—to continue pushing the TPP at the White House. Kasich even stopped by the White House press room to urge its passage after a meeting with Obama in the Oval Office. “You gotta get this done,” he said. “I’d love to think it could happen next year. I’m not convinced it can happen after this year.”

Clinton’s running mate has taken a stab at settling the issue. When asked about the TPP during an interview with SiriusXM’s Ari Rabin-Havt earlier this month, Sen. Tim Kaine of Virginia suggested that he dislikes the idea of a lame-duck vote on the TPP. “You bring up stuff in the lame duck when you hope you kind of won’t be held accountable by the voters for it,” he said. “If you’re going to have a vote about it, do it when it’s upfront and everybody is going to be held accountable for it. And I think that is the best practice.”

Clinton has had to walk a fine line on the TPP. Obama has been one of Clinton’s best surrogates on the campaign trail, yet he also views passage of the TPP as a capstone for his presidency. For Clinton to criticize Obama every time he pushes the TPP would seem ungrateful. When trade came up during Monday’s debate, Trump repeatedly hectored Clinton, asking if the deal was “President Obama’s fault.” Clinton sidestepped, conceding only that “there are different views about what’s good for our country, our economy, and our leadership in the world,” without mentioning Obama by name.

But that leaves the anti-TPP progressive groups nervous. “It should matter to President Obama that the person that he wants to succeed him is opposed to this trade deal,” says Neil Sroka, communications director at Democracy for America. “[Clinton] has not only said she’s opposed to it, but has gone to great lengths to illustrate her opposition repeatedly. The only thing we’re still waiting for Secretary Clinton to do is to join us in calling on President Obama to not take this up during a lame-duck session of Congress.”