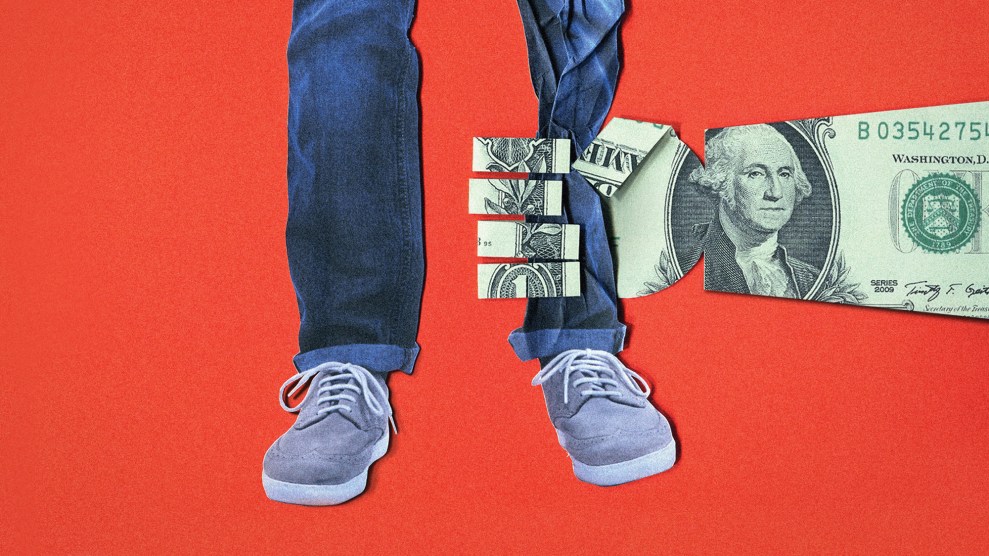 Sofía was 19 when she fled El Salvador after receiving threats from a drug cartel. In late 2014, she was caught near San Diego by the US Border Patrol and sent to an immigration detention center in Eloy, Arizona. Following eight months in detention, she was desperate to reunite with her mother, who lives in Northern California. Like many detainees, Sofía was eligible for release on bond while awaiting her immigration court proceedings. But her bond, set at $15,000, was far more than she could afford.

Then another detainee told Sofía about a company that could get her out—so long as she agreed to wear an ankle bracelet and pay a monthly fee. Her mother, Josefina, borrowed nearly $4,000 to send to the Virginia-based firm, called Libre by Nexus. In return, the company secured Sofía’s bond. (Sofía and Josefina are both pseudonyms.) A company staffer met Sofía outside the detention center and brought her to a nearby office, where they attached a bulky black GPS monitor to her left ankle. Sofía says a company rep warned her that if she took it off, she could be deported.

Since launching in 2013, Libre by Nexus has seen its business explode, in part because of the recent surge of Central American migrants and a push by Immigration and Customs Enforcement (ICE) to raise detainees’ bonds as a deterrent to further migration. (Though bonds start at $1,500, they are regularly tens of thousands of dollars.) An ever-worsening backlog in federal immigration courts means that detainees who can’t afford to post the required collateral can face months, even years, in detention. That’s where Libre by Nexus comes in.

Sofía could pay more than $12,000 while waiting for her case to be resolved.

Those fees—$420 a month plus as much as $4,000 up front, part of which goes to a bail-bond company—can be higher than the cost of electronically monitoring criminal parolees. They can exceed the original bail amount. If a client’s ankle monitor gets damaged or lost, the company can charge her up to $3,950, which may be several times the typical replacement cost for the device.

In the more than two years it may take for Sofía’s immigration case to be resolved, she and her mother will have paid Libre by Nexus more than $12,000. They’ll also have paid hundreds more to a payday lender that helped them foot the initial fee. Together the monthly bills can be over $500—more than a third of what Josefina makes prepping veggies at a restaurant.

Federal immigration officials declined to comment on their release of detainees under bonds backed by Libre by Nexus. Notably, since 2009, ICE’s own ankle monitor program has released tens of thousands of selected detainees without bond.

I met Donovan at Libre by Nexus’ headquarters in the rolling hills of rural Virginia. Donovan—whose various other ventures include jailhouse ministries, pro bono immigrant legal support, charitable scholarships, and home loans for immigrants—asked to be interviewed in the company’s mock courtroom, where his lawyers assist immigrants in navigating the justice system. Donovan said his clients’ monitoring fees help pay for offices in 10 states and more than 100 employees who track detainees and provide legal and counseling services.

His company fills its social-media sites with glowing testimonials from clients, but its methods have attracted criticism from federal regulators and civil rights groups. Public records obtained by the nonprofit Legal Aid Justice Center show that ICE and the Department of Homeland Security opened an investigation in 2013 after some Virginia lawyers accused Libre by Nexus of targeting undocumented immigrants in ICE custody and promising them it could guarantee their release. A subsequent report by DHS investigators found no criminal wrongdoing, arguing that concerns about high fees were offset by the fact that the contracts had been “signed between competent adults.” A police investigation into the allegations described the matter as “very shady,” but prosecutors declined to bring charges.

Donovan says his company has no ties to ICE. “The only time that we’ll share information with ICE is under a valid court order,” he told me. Yet the company’s lawyers said in a recent lawsuit that GPS is used so both the company and the US Immigration Court may know where a detainee is at all times. In multiple emails filed as part of a contract dispute, Libre by Nexus staff members referred to discussions with ICE agents about a client’s whereabouts.

“There are nights when we cannot sleep,” Josefina says. “We’re worried that they’re coming for us.”

Donovan confirmed that clients who break their contracts could have their bail revoked, prompting “licensed recovery agents” to return them to custody. But he also said the company “aggressively” waives GPS monitoring fees, to the tune of $80,000 in a recent month. “I’m never going to misunderstand or be heavy-handed to a person who can’t afford to pay it,” he said. “That would be counterintuitive to the entire mission of what we do.”

Sofía and Josefina said they knew nothing about potential relief from monitoring fees. “Sometimes we want to buy food to eat,” they told me at a café in Berkeley, California, “and we cannot because we have to have the money ready to pay them.” They recalled an evening when Sofía’s ankle monitor started vibrating incessantly and they panicked. “There are nights when we cannot sleep,” Josefina said. “We’re worried that they’re coming for us.”

This story was supported by the Investigative Reporting Program at the University of California-Berkeley.