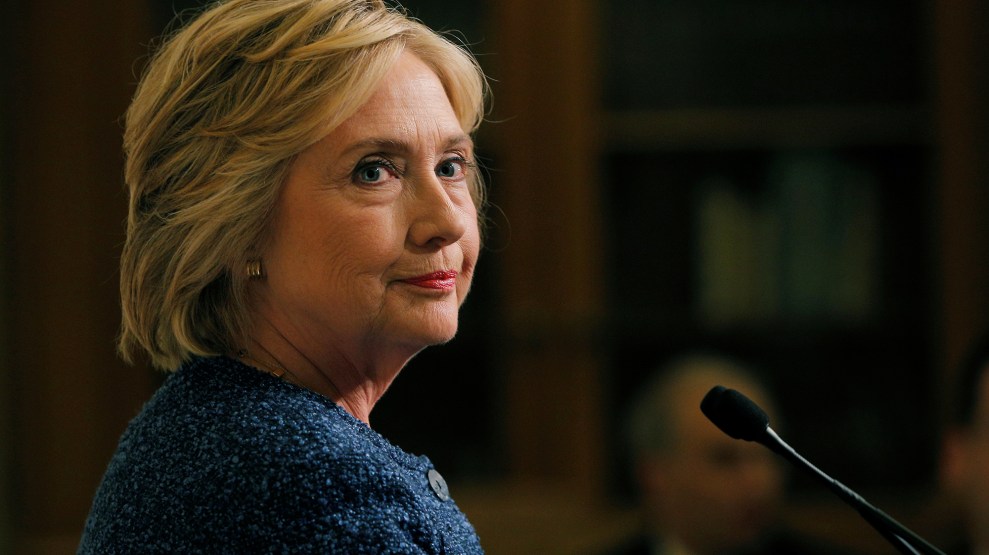 A group of House Republicans has devised a new attack on Hillary Clinton for her use of a private email server, introducing a bill that would change federal laws that determine government prosecution of those accused of mishandling classified information.

The Classified Information Protection Act of 2016, introduced Wednesday by Rep. John Ratcliffe (R-Texas), would amend two federal statutes by adding a single line: “In a prosecution…the Government need not prove that the defendant intended to cause harm to the United States.”

Ratcliffe said in a press release that the bill is a direct response to the Justice Department’s decision not to prosecute Clinton after she passed classified information through a private home email server during her time as secretary of state.

“Despite overwhelming evidence uncovered by the FBI that Clinton was ‘extremely careless’ in her handling of highly classified information, Director James Comey said he recommended not pursuing criminal charges because there was no clear evidence proving her intent,” Ratcliffe said in the release. “If this is the precedent, if this is the standard—what’s to prevent this same level of extreme carelessness in the future? What’s to stop the reckless disregard for the sensitivity of classified information from again jeopardizing the lives of Americans in harm’s way?”

“[The legislation] would change nothing in terms of how the FBI evaluated the Hillary case,” he said. “Comey’s point wasn’t that they had to prove intent to charge her. His point was that as a matter of prosecutorial discretion, the FBI generally doesn’t recommend charges when there was no intent to mishandle classified information.”

Moss added that the FBI director also said that under normal circumstances, “the person would instead be punished administratively. That’s not an option here for Hillary.”

The Clinton campaign did not respond to a request for comment.

Among the Republican co-sponsors of the measure are those who have been most vocal about Clinton’s handling of her emails, including House Judiciary Committee Chairman Bob Goodlatte (R-Va.), House Oversight and Government Reform Committee Chairman Jason Chaffetz (R-Utah), Rep. Trey Gowdy (R-S.C.), and Rep. Will Hurd (R-Texas). Hurd served in the CIA as an undercover officer from 2000 to 2009, a role he’s discussed publicly while coming close to disclosing classified information himself. Chaffetz has actively kept the email story going over the last few months and asked the FBI and the DOJ to investigate whether Clinton lied to Congress when she testified about the server during the Benghazi hearings last October. His request came after Comey told Chaffetz the FBI didn’t investigate whether Clinton lied to Congress about the server during its investigation into mishandled classified information.

On July 5, Comey announced the findings of the FBI’s yearlong criminal investigation into Clinton’s use of multiple email servers over her four years as the nation’s top diplomat. The agency determined that of the 30,000 emails it reviewed, 110 (within 52 email chains) contained classified information at the time they were sent or received, and eight contained information deemed top secret by the originating agencies. A subsequent release of FBI records noted that a laptop and thumb drive containing the entire set of emails was lost by Clinton’s staff. “Although we did not find clear evidence that Secretary Clinton or her colleagues intended to violate laws governing the handling of classified information, there is evidence that they were extremely careless in their handling of very sensitive, highly classified information,” Comey said.