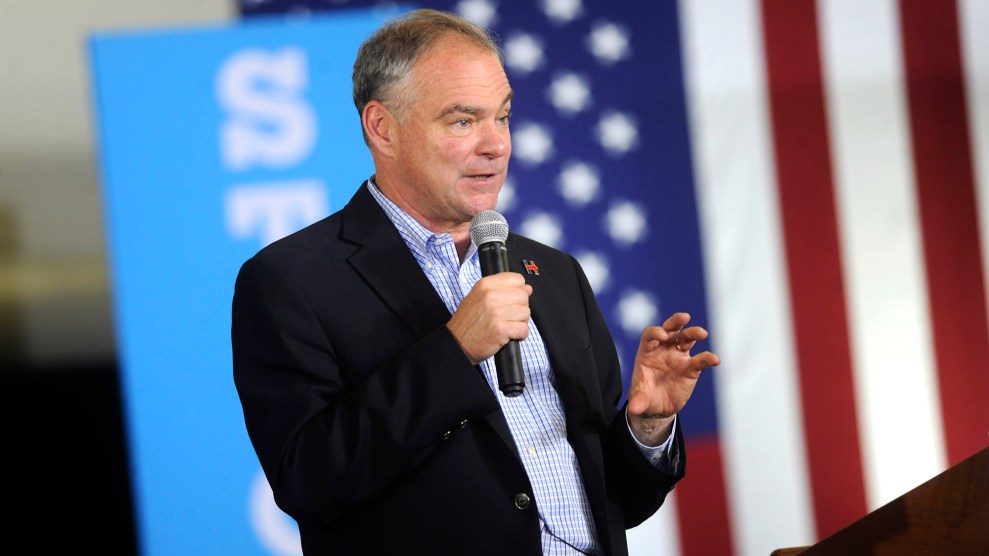 Democratic vice presidential candidate Tim Kaine ripped into Donald Trump’s national security credentials Tuesday afternoon, saying that as a military parent he’s worried by the notion of the Republican candidate leading the nation’s armed forces. “The emotionally volatile, fact-challenged, self-obsessed, and inexperienced Donald Trump as commander in chief scares me to death,” Kaine said during an event in Wilmington, North Carolina, that the campaign had billed as a major foreign policy address.

With just over two months to go before Election Day, Hillary Clinton and Kaine have kicked off the fall campaign season on Tuesday with a simple message focused on painting Trump as too reckless to be trusted with the powers of the presidency. The campaign released a television ad Tuesday featuring veterans watching some of Trump’s more outlandish remarks about the military, and a super-PAC backing Clinton put out a commercial painting Trump as overly eager to use nuclear weapons.

Kaine’s speech didn’t break new ground on policy details, but the senator from Virginia offered a pointed attack on Trump’s character. “As a military father, Donald Trump’s disrespect for our military absolutely infuriates me,” Kaine said, abandoning his usual nice-guy routine for the attack dog role he’s adopted recently. (Kaine’s son is a marine who deployed to Europe shortly after Kaine became Clinton’s running mate.) Kaine ticked off a litany of foreign policy points on which he sees Trump as less than fit: Trump’s shifting positions on the Iraq War and penchant for inaccurately describing his past stances; his apparent eagerness to utilize nuclear weapons and seeming ignorance of how the nuclear triad works; and his confusion on the difference between the Quds Force and the Kurds.

Kaine also mocked Trump for failing to push Mexico to build his promised border wall when he met with the country’s president last week. “He choked,” Kaine said. “Turns out, Donald isn’t such a great negotiator after all.”

The Democrat also suggested that Russian President Vladamir Putin might be aiding Trump’s campaign thanks to ties between the two. “Something strange is clearly going on,” Kaine said, pointing not just to Trump’s request that Russia hack Clinton’s emails, but also to the connections between Trump’s former campaign manager Paul Manafort and the Russian regime. Trump’s foreign policy proposals “match up perfectly with Vladimir Putin’s wish list,” Kaine said. “It has to make you wonder.”

The period after Labor Day has traditionally been seen as the point when lower-information swing voters tune into the presidential election. With Clinton set to speak alongside Donald Trump at a forum on national security Wednesday night—the first time the two will share a stage this election—the Democratic candidates appear to be doing all they can to make voters afraid of what their opponent might do if given control of the country’s foreign policy.