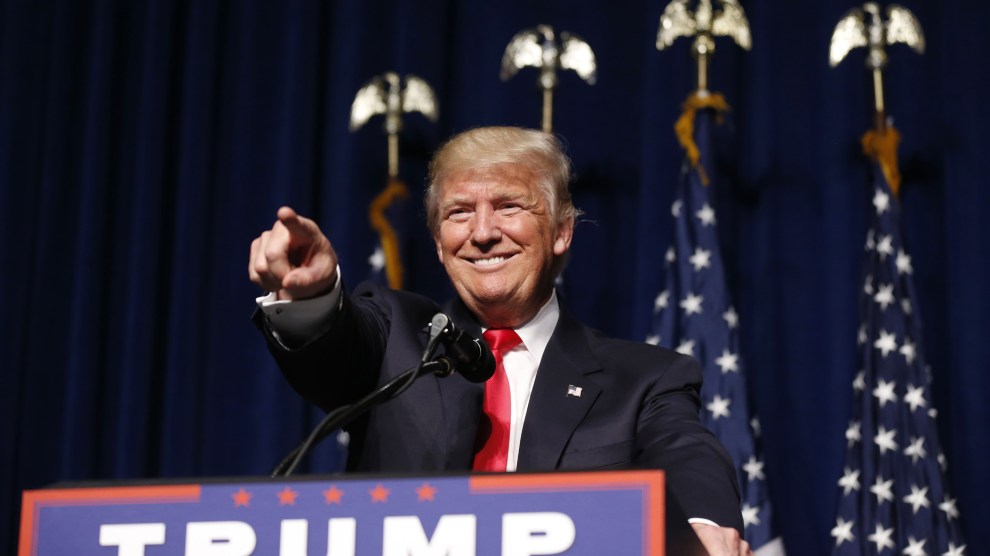 A Hillary Clinton campaign spokesman says a new article in the New York Observer establishes a “direct link” between the Donald Trump campaign and the hacker or hackers who have recently penetrated the Democratic National Committee, the Democratic Congressional Campaign Committee, and other high-profile Democratic officials.

On Tuesday, the Observer published a piece maintaining that the DCCC had coordinated—presumably improperly—with the Hillary Clinton campaign in 2015. The story, written by a freelance contributor named Michael Sainato, cited “an internal DCCC memo” leaked to the Observer from Guccifer 2.0—the handle of the hacker or hackers who have successfully targeted these Democratic committees. The Observer is owned by Trump’s son-in-law, Jared Kushner, who has been a top adviser to the Republican presidential nominee.

In an email to Mother Jones, Fallon elaborated on his tweet: “Guccifer 2.0 is known to be the Russians. And now that they are leaking materials obtained from their hacking to Trump adviser Jared Kushner’s newspaper, that’s a pretty direct link between Trump and the Russians behind this hack.”

Kushner is married to Ivanka Trump and has become an influential figure within Trump’s political team.

Glen Caplin, another spokesman for the Clinton campaign, issued a more complete statement: “The Russians have become even more brazen in their effort to influence the election by leaking documents to Trump adviser Jared Kushner’s newspaper for publication. Trump’s longtime confidant Roger Stone has already admitted he’s in contact with Julian Assange, who has been exposed for actively aiding the Russians. And both Stone and Assange are promising more leaks targeting Clinton as the election approaches, something Donald Trump actively invited. This is a national security issue and every American deserves answers about potential collusion between Trump campaign associates, WikiLeaks and the Kremlin.”

In response to questions posed by Mother Jones on Twitter, Sainato said in a now-deleted tweet that Fallon’s claims were “more Red Dawn Russian conspiracies.” In the same tweet, he said that he had “asked Guccifer on twitter for docs,” as had other reporters. In a subsequent email to Mother Jones, Sainato pointed out that he is a registered Democrat. He’s is critical of Clinton, and noted in the email that “if Hillary Clinton and many of her policies are accepted as the definition of what is progressive and liberal, then we (the Democratic Party and progressives) are in a lot of trouble.”

Reached by Mother Jones via Twitter’s direct messaging platform, Guccifer 2.0, referring to Sainato, said, “i gave them some exclusive docs they asked for.” The hacker—who has identified himself as a male in prior communications with Mother Jones—said he provides documents to anyone who requests them. He said he would even give materials to Fallon, if Fallon asked. He denied that he had coordinated anything with the Observer and claimed not to have known that Sainato was working on a piece for the newspaper owned by Trump’s son-in-law. He said Fallon was “silly :).” And he claimed that he has not been trying to help Trump: “this is absurd, if u remember it was me who published trump’s dossier.” (He was referring to leak of Democratic National Committee opposition research file on Trump.)

Guccifer 2.0 has denied multiple times that he is working for, with, or on behalf of Russian interests, most recently in a Wall Street Journal article published Wednesday.

“I read several reports, some experts found out that my proxy IP is hosted at a service that’s somehow connected with Russia and has a version in Russian as well as in English,” the hacker told the newspaper. “This is their strong evidence.” He meant that sarcastically.

Anonymous US officials have repeatedly told journalists that Guccifer 2.0 is linked to the Russians, and Clinton said in July that “we know that Russian intelligence services hacked into the DNC.” Director of National Intelligence James Clapper suggested Wednesday that the Russians were behind the hack of Democratic targets, supporting President Barack Obama’s statement that “experts have attributed this [hack] to the Russians.” Security research firms have also cited Russia as the source of the hack. The Washington Post reported Sunday that US intelligence and law enforcement are investigating “what they see as a broad covert Russian operation in the United States to sow public distrust in the upcoming presidential election” but that so far there is no “‘definitive proof’ of such tampering, or any Russian plans to do so.”