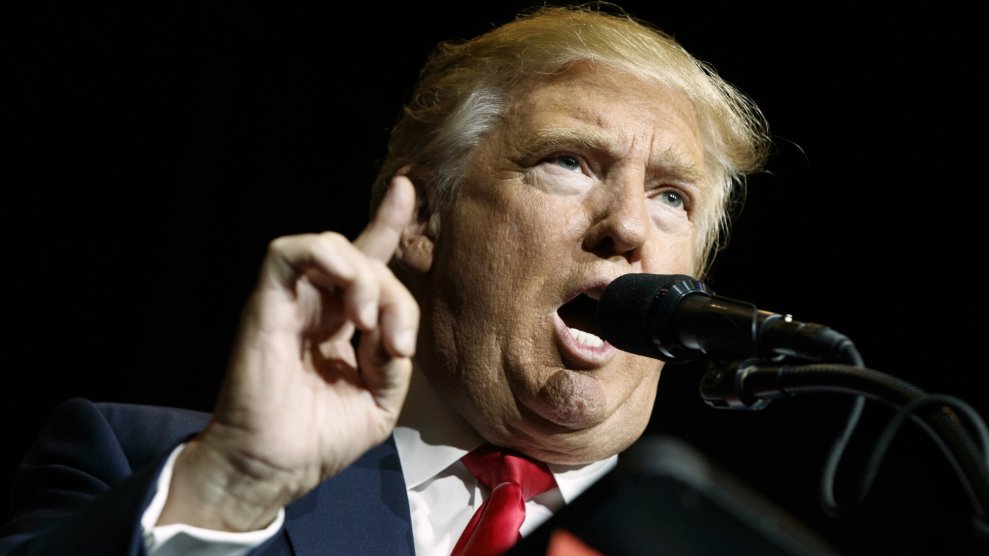 Facing allegations that he sexually assaulted several women, Donald Trump gave the most extreme and angry speech of his campaign on Thursday, during a rally in West Palm Beach, Florida. The GOP nominee, who tweeted on Tuesday that the “shackles have been taken off me,” lashed out at the “corporate” media, the women who have accused him of kissing and touching them without consent, and a “globalist” criminal conspiracy involving Hillary Clinton, her husband, and international bankers.

After a string of warm-up speakers who only indirectly referred to the sexual assault allegations, Trump cut straight to the chase. “These claims are fabricated,” he declared angrily. “They are lies. These events never happened—and the people who brought them—you take a look at these people, you study these people, and you’ll understand that also.” Zeroing in on a reporter for People magazine, who said that Trump assaulted her during a 2005 interview, Trump seemed to dismiss her account by insulting her looks. “Think of it,” Trump said, “she’s doing a story on Melania, who is pregnant at the time, and Donald Trump, our one-year anniversary, and she said I made inappropriate advances. And by the way, the area was a public area, people all over the place. Take a look, you take a look, look at her, look at her words. You tell me what you think. I don’t think so.”

Trump claimed he possessed information that would debunk the claims that he sexually assaulted these women: “We already have substantial evidence to dispute these lies and it will be made public in an appropriate way at an appropriate time very soon.”

The GOP nominee sought to tie the cascading allegations against him to a broader anti-Trump conspiracy cooked up by media conglomerates, the Clinton campaign, and shadowy international interests. “The corporate media in our country is no longer involved in journalism,” he said. “There’s a political, special interest, no different than any lobbyist or other financial entity, with a total political agenda. The agenda is not for you, it’s for themselves.” Trump charged that journalists “collaborate and conspire directly with the Clinton campaign on helping her win the election.” He proclaimed, “This is a conspiracy against you, the American people, and we cannot let it happen.” It was a plot, he said, to promote “radical globalization” and to protect a “corrupt establishment.” The only way to thwart the evil cabal, he insisted, was to elect Trump president. But, he warned, the schemers had rigged the system to elect Clinton and keep Trump out. It was a clear message: if Clinton wins, she will be an illegitimate and criminal president representing sinister forces intent on screwing Americans. A Clinton victory, he signaled, would mean the election was fixed—a betrayal that no patriotic American should accept.

Throughout the speech, Trump used harsh language that evoked old and ugly anti-Semitic conspiracy theories about international bankers who supposedly infiltrate national governments and control the global agenda. Citing recent Clinton campaign emails published by WikiLeaks, Trump told the crowd that “Clinton meets in secret with international banks in order to plot the destruction of US sovereignty.” Echoing the rhetoric of Alex Jones and other conspiracy theorists, Trump repeatedly referred to “globalists” as the true enemy and Clinton as their handmaiden.

The crowd, packed into an indoor venue at the South Florida fairgrounds, lapped up Trump’s terrifying message. His supporters repeatedly turned toward the press pen to heckle reporters with chants of “CNN sucks!” and “Treason!” During the tirade, Trump said that he felt “hurt” personally by the media coverage of his White House bid, but he added that race was not “hell” for him. The campaign, he declared, was “a journey to heaven.”