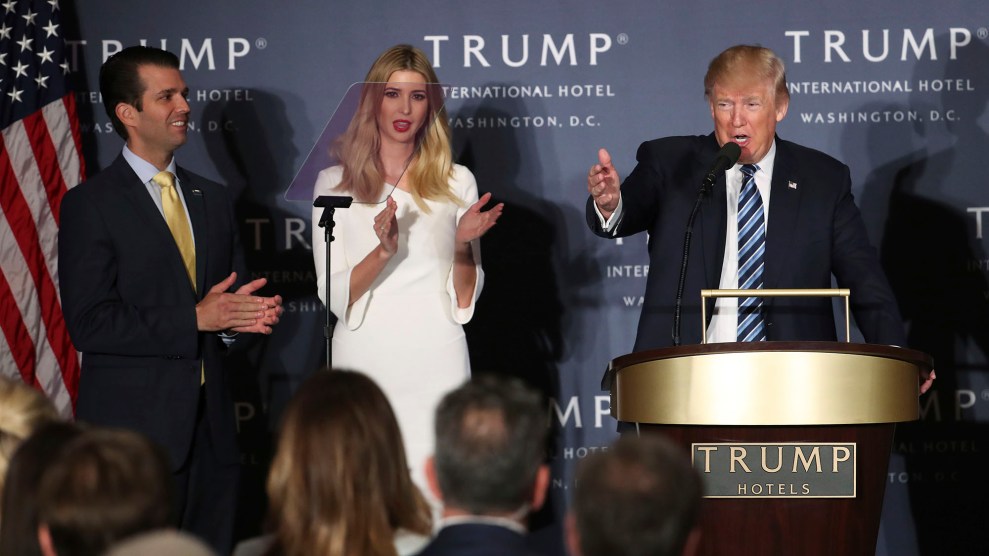 With less than two weeks to go before the presidential election, Donald Trump spent Wednesday morning not worrying about making America great again but about preserving his business empire.

As Trump took the stage for the grand opening of his new hotel in Washington, DC, it wasn’t clear whether he would be talking about the election or just praising this new venture. It was a throwback to the Republican primary, when campaign events and Trump product placement went hand in hand. (At a press conference at his Florida resort, Mar-a-Lago in March, Trump bragged about his business prowess by listing products that have borne his name over the years—Trump steaks, Trump vodka—as the cable networks aired the event live.)

The hotel opening was listed on his campaign website and staffed partly by campaign employees. But with election day around the corner, Trump seemed more interested in basking in the glow of the media cameras to hype this project—and his kids, Ivanka, Donald Jr., and Eric, who were there for the occasion. He had given up a morning of campaigning in a swing state for this. On the same day, Mike Pence, was holding a rally in Utah, a state Republicans should be able to take for granted but where Trump has been slipping in the polls.

“With a notable exception of 1600 Pennsylvania Avenue, this is the most coveted piece of real estate in Washington, DC,” Trump said to a full room of VIPs in business suits and dresses. The well-attired attendees, who clapped when Trump entered the room, did not look like folks upset with NAFTA and who were eager to see the Washington swamp drained. One VIP was a woman who works for a major consulting firm in Washington who recently booked meeting rooms at the hotel for an event in April. The rates were low, she said, as many companies in the capital shy away from the Trump hotel because of Trump’s campaign. “There are a lot of people who will not want to have anything to do with this place,” she said. She noted that her firm is hoping that by the time of its event, Trump will have “calmed down.”

With more than two hundred journalists in the ballroom covering the odd event, Trump claimed that the hotel showed that he can get things done. He declared, “My theme today is five words: ‘under budget and ahead of schedule.'” (That is actually six words.) Trump then pivoted from hailing his hotel to assailing Obamacare. The health care program “is in free fall,” he said. The “military is depleted,” he added. Finally, he congratulated Newt Gingrich, one of his surrogates, for a combative interview with Fox News host Megyn Kelly on Tuesday night.

Though the ballroom was packed with camera crews and reporters, Trump’s days of getting uninterrupted air time on major cable networks are over. None of the cable networks paid much attention to his event Wednesday. It stood in stark contrast to the last big event he held at the hotel.

That was September 16, and Trump was riding high. The polls showed him neck-and-neck with Hillary Clinton, and he tricked the media into giving him a free 45-minute infomercial for his new Washington hotel. He had invited the press to the hotel, with a soft opening underway, for what was billed as a major statement on birtherism. The word was that Trump would finally declare that he believed Obama was a US citizen, after years of championing the conspiracy theory that the president was born in Kenya. Instead, Trump used about half an hour of the free media coverage to promote the hotel and showcase military veterans supporting his campaign. Eventually, he made about 20 seconds of remarks regarding his supposed abandonment of birtherism (which hardly seemed genuine).

After that event, Trump was pleased with how he had bamboozled the media, and the press fumed. “We got played,” CNN’s John King admitted. Ultimately, this stunt may have backfired on Trump. It became a turning point in his media coverage. Major news outlets called his birther statement—in which he blamed Clinton for starting the birther charge—a lie. And when Trump gave a tour of the hotel that day to the photographers and videographers in his press pool, without any reporters, the pool decided to destroy the footage. Shortly after this episode, Trump’s campaign began tanking, following his poor performance at the first debate and the appearance of a video of him bragging about sexually assaulting women.

After the September birtherism event ended, the stage on which Trump had touted his new hotel literally collapsed as the cameras were still rolling—a perfect metaphor for what happened that day between Trump and the press. On Wednesday morning, the stage did not fall apart. But it seemed as if Trump might have realized that his electoral prospects had. He appeared more fixated on trying to save his brand, which has been harmed by the divisive and insult-driven campaign he has mounted. After the ribbon-cutting ceremony in the hotel lobby, Ivanka was hobnobbing with well-wishers and accepting congratulations. Mother Jones asked her if her father’s presidential bid had damaged the Trump brand. She just smiled and quickly walked away.