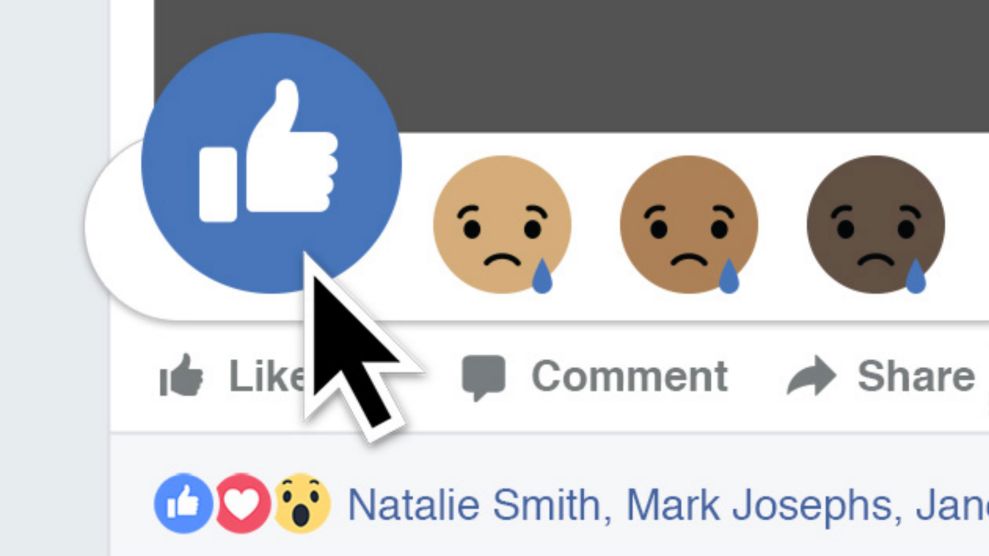 Imagine if, during the Jim Crow era, a newspaper offered advertisers the option of placing ads only in copies that went to white readers.

The ubiquitous social network not only allows advertisers to target users by their interests or background, it also gives advertisers the ability to exclude specific groups it calls “Ethnic Affinities.” Ads that exclude people based on race, gender and other sensitive factors are prohibited by federal law in housing and employment.

Here is a screenshot of a housing ad that we purchased from Facebook’s self-service advertising portal: 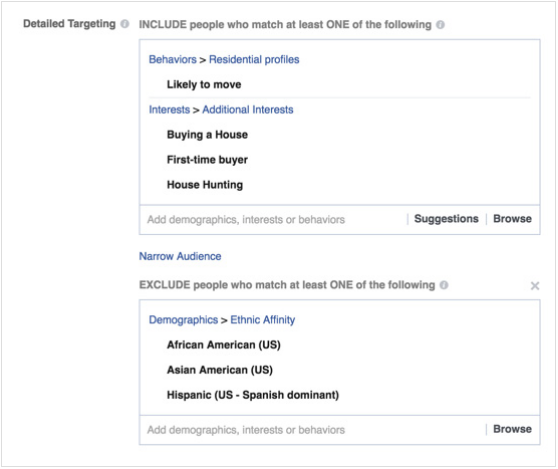 The ad we purchased was targeted to Facebook members who were house hunting and excluded anyone with an “affinity” for African-American, Asian-American or Hispanic people. (Here’s the ad itself.)

When we showed Facebook’s racial exclusion options to a prominent civil rights lawyer John Relman, he gasped and said, “This is horrifying. This is massively illegal. This is about as blatant a violation of the federal Fair Housing Act as one can find.”

The Fair Housing Act of 1968 makes it illegal “to make, print, or publish, or cause to be made, printed, or published any notice, statement, or advertisement, with respect to the sale or rental of a dwelling that indicates any preference, limitation, or discrimination based on race, color, religion, sex, handicap, familial status, or national origin.” Violators can face tens of thousands of dollars in fines.

The Civil Rights Act of 1964 also prohibits the “printing or publication of notices or advertisements indicating prohibited preference, limitation, specification or discrimination” in employment recruitment.

Facebook’s business model is based on allowing advertisers to target specific groups 2014 or, apparently to exclude specific groups 2014 using huge reams of personal data the company has collected about its users. Facebook’s microtargeting is particularly helpful for advertisers looking to reach niche audiences, such as swing-state voters concerned about climate change. ProPublica recently offered a tool allowing users to see how Facebook is categorizing them. We found nearly 50,000 unique categories in which Facebook places its users.

“We take a strong stand against advertisers misusing our platform: Our policies prohibit using our targeting options to discriminate, and they require compliance with the law,” said Steve Satterfield, privacy and public policy manager at Facebook. “We take prompt enforcement action when we determine that ads violate our policies.”

Satterfield said it’s important for advertisers to have the ability to both include and exclude groups as they test how their marketing performs. For instance, he said, an advertiser “might run one campaign in English that excludes the Hispanic affinity group to see how well the campaign performs against running that ad campaign in Spanish. This is a common practice in the industry.”

He said Facebook began offering the “Ethnic Affinity” categories within the past two years as part of a “multicultural advertising” effort.

Facebook declined to answer questions about why our housing ad excluding minority groups was approved 15 minutes after we placed the order.

By comparison, consider the advertising controls that the New York Times has put in place to prevent discriminatory housing ads. After the newspaper was successfully sued under the Fair Housing Act in 1989, it agreed to review ads for potentially discriminatory content before accepting them for publication.

Steph Jespersen, the Times’ director of advertising acceptability, said that the company’s staff runs automated programs to make sure that ads that contain discriminatory phrases such as “whites only” and “no kids” are rejected.

The Times’ automated program also highlights ads that contain potentially discriminatory code words such as “near churches” or “close to a country club.” Humans then review those ads before they can be approved.

Jespersen said the Times also rejects housing ads that contain photographs of too many white people. The people in the ads must represent the diversity of the population of New York, and if they don’t, he says he will call up the advertiser and ask them to submit an ad with a more diverse lineup of models.

But, Jespersen said, these days most advertisers know not to submit discriminatory ads: “I haven’t seen an ad with 2018whites only’ for a long time.”