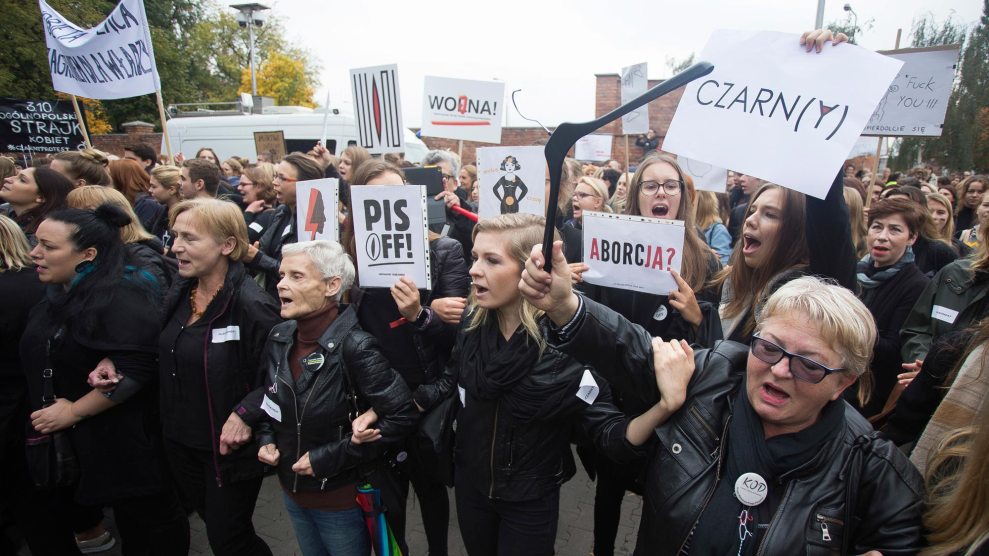 Update, October 6: On Thursday, the Polish parliament overwhelmingly voted against this proposed abortion ban, having been swayed by the nationwide protests, which lawmakers said gave them “food for thought.” The minister of science and higher education, Jaros?aw Gowin, said the protests had “caused us to think and taught us humility”.

Nearly six million women in Poland went on strike today, protesting a comprehensive ban on abortion that has begun to make its way through the country’s legislature.

Poland already has some of Europe’s strictest abortion laws. The procedure is illegal, except for cases where the woman’s life or health are in danger, or if the pregnancy is the result of rape or incest. The proposed law would ban abortion in all cases, with no exceptions, and impose a maximum 5-year prison term for women who receive the procedure. Doctors found to have assisted in providing an abortion could also be prosecuted and imprisoned under the proposed measure. Beata Szyd?o, Poland’s prime minister, has said she supports a total abortion ban, and the leader of the conservative Law & Justice party said he’ll vote for the bill because it’s in line with the Catholic church. He said he is “convinced that a vast majority of the caucus, or perhaps all of it, will back the proposal.”

Protests against this bill—which is currently being considered by a government committee after being initiated by an activist group’s online petition—took place in more than 60 cities across Poland. Many of the participants wore all black, and a number of businesses also closed for the day in solidarity. The organizers drew their inspiration from a 1975 protest in Iceland, in which 90 percent of the country’s women refused to work, cook, clean, or take care of their children, to draw attention to economic and social inequality.

Medical professionals around the country have also opposed the extreme measure, expressing concern that it could result in criminal investigations following miscarriages, and could also force doctors to make decisions that are detrimental to the health of women.

“Whoever causes the death of the unborn child is punishable by imprisonment up to three years. If I have a patient with preeclampsia, who is 32 weeks pregnant, I will have to let her and her child die,” Romuald Debski, the head of Obstetrics and Gynecology at a Warsaw hospital, told Polish media. “I have to, because if I perform a Caesarean section and the child dies, I may go to prison for three years, because the child was premature.”

Demonstrations against the bill began over the weekend, when thousands rallied in front of the parliament building in Warsaw. Agnieszka Dziemianowicz-Bak, a member of the left-wing Together party, spoke to the crowd. “We will not allow our hospitals to be turned into torture chambers,” she said, “ and our doctors into prison guards.”