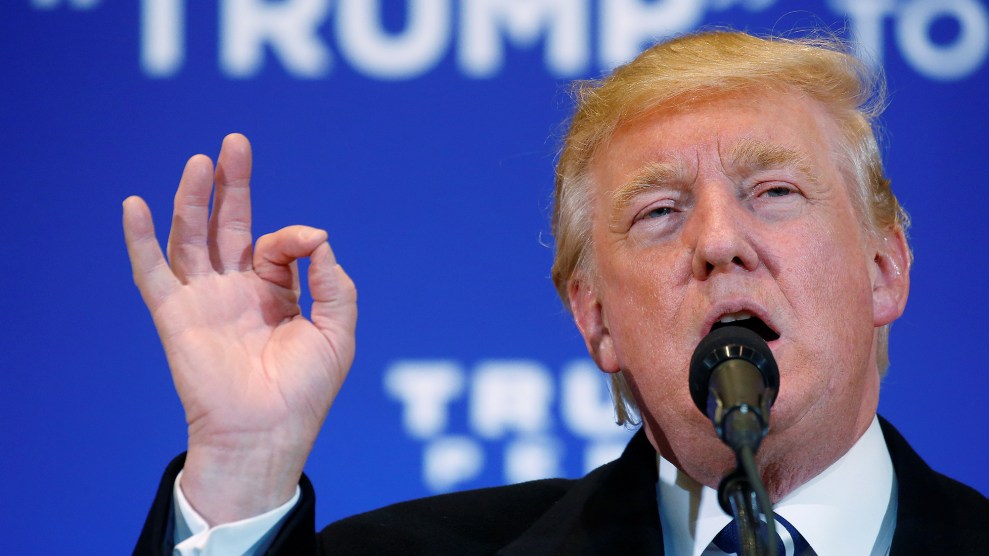 Donald Trump’s presidential campaign and Stop the Steal Inc., an organization founded by former Trump adviser and GOP trickster Roger Stone, were sued Sunday by the Ohio Democratic Party for “conspiring to threaten, intimidate, and thereby prevent minority voters in urban neighborhoods from voting in the 2016 election.”

The suit, filed in Ohio district court, was one of four lawsuits filed on Sunday by state Democratic parties, including those in Nevada, Arizona, and Pennsylvania, accusing the Trump campaign of working with Stone’s group and state Republican officials to target minority voters.

The Ohio lawsuit cited Trump’s frequent, “racially tinged” calls for his supporters to go to particular areas and “watch” voters to make sure they don’t “steal” the election for Hillary Clinton. “I hope you people can…not just vote on the 8th, [but] go around and look and watch other polling places and make sure that it’s 100 percent fine,” Trump told a crowd in Altoona, Pennsylvania, on August 12. Ten days later, during a speech in Akron, Ohio, Trump told the crowd that they had to gather friends and family and go “watch” others vote. “And when I say ‘watch,'” he said, “you know what I’m talking about right? You know what I’m talking about.”

The lawsuits request that harassment or intimidating activity around election sites be considered illegal. The state Democrats are also asking that Trump, Stone’s organization, and the state Republican parties be prevented from engaging in this type of behavior or interacting with voters to “interrogate” them about their voting status.

Trump campaign spokesperson Hope Hicks didn’t respond to a request for comment. Stone said Monday that the lawsuits are “without merit and the lawyers who filed [them] could face sanctions.”

In an email to Mother Jones, Stone explained that Stop the Steal and another group intend to conduct a “neutral, scientifically based EXIT POLL [sic] in order to compare the actual machine results with the exit poll results in 7000 key precincts. Precincts are chosen base [sic] on one party rule and past reports of irregularities—not racial make-up as falsely reported in the alt-left media.”

According to Stone, his group intended to ask voters who they voted for on a voluntary basis, and he did not see how that could be construed as intimidating. He added that there was no coordination with the Republican National Committee, the individual state parties, or the Trump campaign. “We seek only to determine if the election is honestly and fairly conducted and to provide [an] evidentiary basis for a challenge to the election if that is not the case,” he said. “I assume the purpose of this bogus lawsuit is to distract from the voter-fraud the Democrats have traditionally engaged in.”

Richard Hasen, an elections expert based at the University of California-Irvine, said these suits could be laying the groundwork for further actions if problems arise.

“It is not clear that a court would issue a vague order to stop ‘voter intimidation,’ as requested in [these lawsuits] (as that term would be vague and difficult to enforce),” Hasen wrote on his blog Monday. “But the suits will first bring publicity to the activities, and second get these parties on record stating that they do not plan on engaging in voter intimidation, which itself could be useful in the event of problems on election day.”

Trump’s comments have civil rights groups around the country scared that hostile Trump supporters will show up at polling places in minority areas and harass or intimidate voters, possibly leading to violence. Those groups are planning to deploy thousands of trained legal observers and volunteers at polling places and various voter hotlines to assist voters in understanding their rights and report any troubling activity to law enforcement and election officials.

The Ohio lawsuit specifically targets Stop the Steal, a group created by Stone in April to support Trump’s candidacy. “Stone has encouraged Trump supporters to wear red shirts on Election Day, in large part to menace voters,” the suit states. It alleges that Stone was a “key advisor” to the 1981 campaign of former New Jersey Gov. Thomas Kean, “in which a ‘ballot security’ force wearing black armbands engaged in widespread voter intimidation in Democratic areas of the state,” which led to a 1982 consent decree forcing the Republican National Committee to stop supporting and encouraging “ballot security” activities, particularly against minority voters in minority areas. Last Wednesday, the Democratic National Committee sued the Republican National Committee in federal court in New Jersey, alleging that the RNC’s support of Trump’s calls for aggressive election observers and the RNC’s activities violated the decades-old court order.

On October 25, the Huffington Post reported that a group affiliated with Stop the Steal allowed volunteers to print official-looking ID badges that could have led voters to think that the holder was a legitimate election worker. The volunteers were reportedly planning to videotape voters and conduct fake “exit polls,” according to the report, but Stone nixed the idea after the story broke. Stone repeated his assertion that he wanted Stop the Steal volunteers to conduct legitimate exit polls that could be used to contest election results.