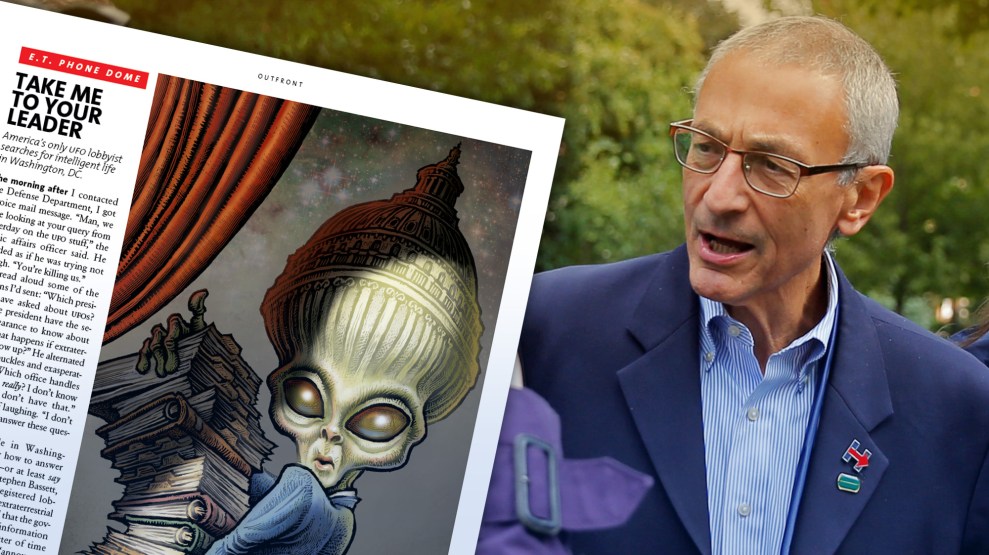 On April 2, 2015, I sent an email to Hillary Clinton’s campaign spokesman, Nick Merill, asking for comment about the possibility of UFOs, specifically about the idea that a Clinton presidency would be a boon to those in the UFO community. He replied that Clinton’s “non-campaign” (this was 10 days before the campaign officially launched) had “a strict policy of not commenting on extraterrestrial activity. BUT the Truth Is Out There.”

I found the response funny—anybody with even a vague knowledge of The X-Files would immediately recognize the line—and I quoted it in my story, “ETs for Hillary: Why UFO Activists Are Excited About Another Clinton Presidency,” which laid out why a Hillary Clinton presidency might be good news for those committed to finding out what’s going on with the notion that extraterrestrials interact with the planet Earth.

This all came back up earlier this week in one of WikiLeaks’ daily releases of John Podesta’s stolen emails. WikiLeaks published the exchange, in which Merrill passed my query to Clinton campaign chairman Podesta. “You can’t make this stuff up,” Merrill wrote. He then asked if Podesta would prefer that Merrill politely decline to comment, “or say that our non-campaign has a strict policy of not commenting on extraterrestrial activity?” Podesta, to his everlasting credit, threw me a bone. “Go with the latter but add the truth is out there,” he wrote. I included his response at the end of my story.

As a self-described “curious skeptic,” Podesta has openly called for greater government transparency on UFO-related matters. In his forward to UFOs: Generals, Pilots, and Government Officials Go on the Record, a 2011 book by journalist Leslie Kean, he wrote, “It’s time to find out what the truth really is that’s out there. The American people—and people around the world—want to know, and they can handle the truth.”

This may be only the beginning of my appearances in Podesta’s email. I pestered him and the Clinton campaign for answers related to a profile I wrote about Stephen Bassett, America’s only registered lobbyist on UFO and extraterrestrial issues, with a mission to force the US government to come clean about all the rumors regarding human interactions with extraterrestrials. Key to Bassett’s plan is getting Clinton to address why she and her husband engaged with the late Laurance Rockefeller over the course of several years in the mid-1990s, as the philanthropist worked hard to force the US government to disclose “The Truth“ about extraterrestrials. At the time, John Podesta was a senior White House staffer and likely had a front-row seat to any Rockefeller-Clinton interaction that might have occurred.

Neither Podesta nor the Clinton campaign responded to questions for that story. But both Podesta and Clinton have spoken seriously about UFOs and extraterrestrials at several points during her campaign. In March, Clinton told Jimmy Kimmel that if elected president, she’d double down on her husband’s efforts to ferret out the truth about UFOs. That interview was four months after a previous Clinton appearance on Kimmel’s show, where she wished the UFO issue had come up, but it didn’t, according to a separate Podesta email. “He didn’t end up asking her about UFOs!” a campaign communications person emailed Podesta after the interview. “She was very disappointed. She practiced UAPs for 5 minutes beforehand.” (UAP stands for “unidentified aerial phenomena,” which is the term used by the more scientific wing of UFO buffs and researchers.) Clearly Clinton was ready and willing to talk about UFOs in a serious way. She also told a New Hampshire reporter in December 2015 that she thinks “we may have been (visited already). We don’t know for sure.” She acknowledged that Podesta had made her pledge to get the information out as president.

The UFO-related material in Podesta’s email box has spawned dozens of stories, ranging from Podesta’s discussion with the late NASA astronaut Edgar Mitchell about the reality of extraterrestrial life to former Blink-182 guitarist Tom DeLonge’s regular communication with Podesta about the topic. Podesta’s email box shows UFO talk going back to at least 2008, when Faiz Shakir, then the vice president of the Center for American Progress, emailed Podesta with the subject line “UFO questions coming up.” He linked to a couple of stories about his connection to the issue. Podesta’s response set the tone for his reactions to future UFO emails over the years: calm, confident, and forward-looking.

“The American people,” he wrote, “can handle the truth.”