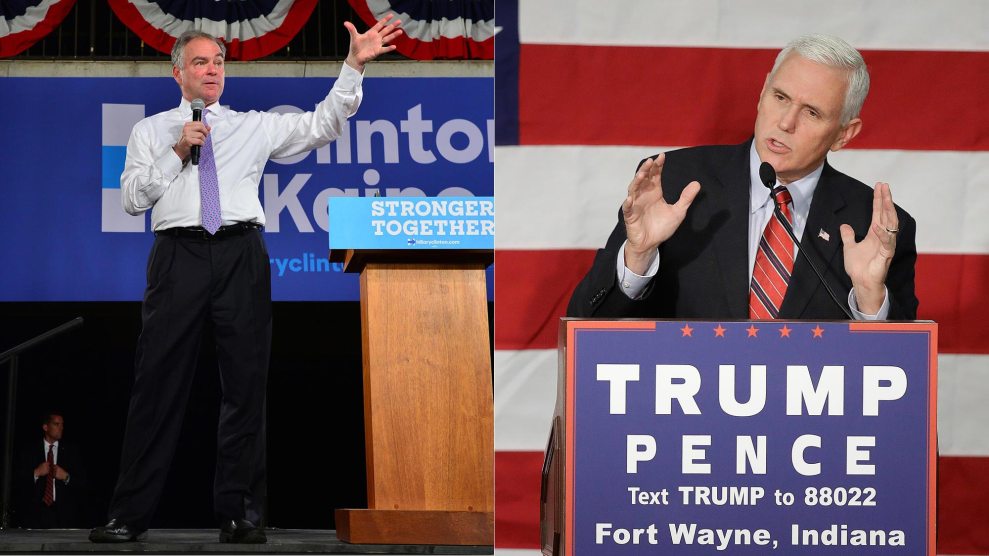 On Tuesday night, Indiana Gov. Mike Pence and Sen. Tim Kaine of Virginia will go head-to-head in the only vice presidential debate of this election cycle, held at Longwood University in Farmville, Virginia. And it could be a lot more interesting—and important—than the lack of hype would have you believe.

Vice presidential debates tend to be regarded as sleepy affairs compared with the showdowns between presidential candidates. But that’s often not the case. In the 2012 debate between Vice President Joe Biden and Rep. Paul Ryan of Wisconsin, Biden deployed an arsenal of prepared facts and figures to revitalize the Democratic ticket after a disappointing first debate performance from President Barack Obama.

In this case, after Donald Trump lost his first presidential debate—in which he sniffed often, spoke in incomplete sentences, lied, and ranted about his “winning temperament”—many conservatives have expressed concern about his lack of focus and debate preparation. It will be up to Pence to restore their faith in Trump. Kaine will have to match Hillary Clinton’s strong first debate performance while defending her against the Trump campaign’s tried-and-true attack lines, including her shifting stance on the Trans-Pacific Partnership and her husband’s role in enacting the North American Free Trade Agreement (NAFTA).

Here are a few reasons why this debate could be a memorable and noteworthy one:

Age: If elected, Trump, at age 70, would be the oldest person to assume the presidency, while Clinton, who will soon turn 69, would be the second-oldest. That means Pence and Kaine are likelier than most running mates to actually become president.

Abortion: For both Pence and Kaine, their records on abortion have been key in their roles as presidential running mates. Pence, a lifelong conservative with a lengthy anti-abortion record as both a congressman and a governor, helps assuage evangelicals skeptical of the thrice-married, formerly pro-choice Trump. Kaine, a Catholic with a mixed abortion record—which includes approving a parental notification measure and a ban on dilation-and-extraction abortions as Virginia governor—provides a more moderate pro-choice stance that may appeal to some undecided voters but could worry progressives.

Women: Near the end of last week’s presidential debate, Clinton criticized Trump for his treatment of Alicia Machado, the 1996 Miss Universe, whom he had called “Miss Piggy” and other derogatory terms after she gained some weight following the pageant. In the days since the debate, Trump has doubled down on his treatment of Machado, calling her “disgusting” and deriding her on Twitter for a “sex tape” (of which there is no evidence). Trump has also invoked Bill Clinton’s adultery in conversations with the media, threatening to bring this line of attack into his campaign strategy against Hillary Clinton. Pence will likely have to answer for these comments and numerous other examples. Kaine will have an opportunity to highlight Trump’s decadeslong record of degrading behavior toward women and critique his policy proposals on issues important to women and families. Kaine has criticized Trump’s proposed parental leave plan, which would provide paid leave only to mothers and for only six weeks. Clinton’s plan would offer 12 weeks of paid leave to all new parents.

Marriage equality: While Trump has only recently taken a firm stance against same-sex marriage, Pence has been famous for his strong opposition to it. In March 2015, Pence signed a bill permitting Indiana business owners to refuse service to gay and lesbian customers due to their religious beliefs. The fallout from this bill’s passage was massive, with athletes, celebrities, corporate leaders, and others criticizing the state and even pulling out of planned business projects. Kaine has called Pence out for this record before. “He ran a one-man crusade to allow Indiana businesses to discriminate against LGBTQ Americans,” Kaine said last month. “Yet Donald Trump saw this and thought, this is the person I want helping me govern this country.”

Trade: In the first presidential debate, Trump spoke about the loss of American jobs to economies overseas, attributing this shift to NAFTA. Although a number of his facts weren’t quite accurate, his points still highlighted Clinton’s inconsistent position on trade: Clinton has expressed both opposition and support for NAFTA—which her husband signed into law—over the course of her political career. This portion of the debate was also widely seen as Trump’s most successful, and it came toward the start of the debate, when the audience was largest. Pence is likely to return to these trade issues, asking Kaine to clarify Clinton’s positions—and potentially putting him in a tough spot when it comes to justifying her onetime support for a trade deal that’s widely seen as having hurt jobs in manufacturing communities.

Climate change: During last week’s debate, Clinton accused Trump of believing that “climate change is a hoax perpetrated by the Chinese,” alluding to tweets along those lines that Trump wrote in 2012. Following the debate, Pence and Trump campaign manager Kellyanne Conway went on CNN to decry this characterization. Conway said Trump believes in climate change but not that it’s man-made. Pence seemed to imply something similar, saying, “What Donald Trump said was a hoax is that bureaucrats in Washington, DC, can control the climate of the earth, and the reality is that this climate change agenda that Barack Obama and Hillary Clinton want to continue to expand is killing jobs in this country.” Kaine, on the other hand, has a relatively strong record of pushing for legislation to address climate change, as both a senator and Virginia’s governor.

Iraq: One of the most heated moments of last week’s presidential debate was when Trump repeatedly denied his record on the Iraq War. He claimed that he’d always opposed it, although recorded clips from the early aughts show him expressing support. Pence also voted in 2002 for the invasion of Iraq, as did Clinton. Trump has excused Pence’s vote as a “mistake” but still criticizes Clinton’s vote. Pence and Kaine may both have to answer for their running mates’ records on Iraq, and Pence could also be asked to clarify Trump’s consistent misrepresentation of his own Iraq War support.