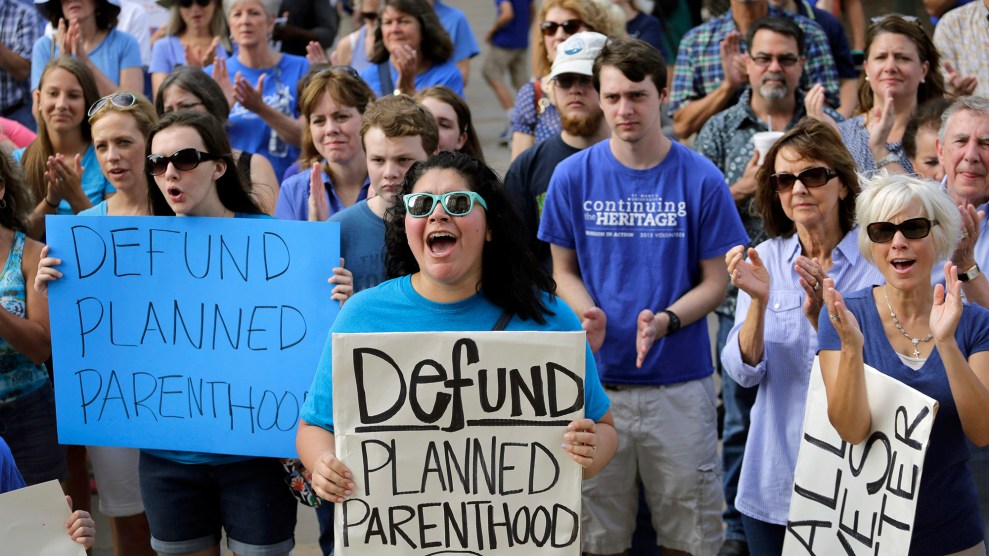 In this July 28, 2015 file photo, Erica Canaut, center, cheers as she and other anti-abortion activists hold a rally on the steps of the Texas State Capitol in Austin, Texas, to condemn the use of tissue samples obtained from aborted fetuses for medical research. Eric Gay/AP Photo

Throughout his campaign, Donald Trump presented himself as a staunchly “pro-life” candidate. He picked the aggressively anti-abortion Indiana Gov. Mike Pence as his running mate and campaigned in favor of outlawing abortion, defeating Roe v. Wade, defunding Planned Parenthood, appointing conservative Supreme Court justices, and cutting back on access to reproductive rights. His selection of Sen. Jeff Sessions of Alabama as his potential attorney general and Rep. Marsha Blackburn (R-Tenn.) as part of his transition team further confirms that abortion rights are likely to be under fire during the Trump administration.

Reproductive rights advocates have said a Trump presidency will potentially be a difficult time for abortion access and reproductive rights—and not only because he will appoint an anti-abortion Supreme Court justice. In fact, overturning Roe v. Wade might be the hardest goal for him to achieve. Stephanie Toti, a senior counsel for the Center for Reproductive Rights, explained that Trump’s judicial appointees would have to disregard a landmark case as well as more than 40 years of settled precedent since it was decided. She argued for the plaintiff in Whole Woman’s Health v. Hellerstedt, widely considered the most important abortion case to come before the high court in several decades. The Supreme Court struck down several stringent abortion restrictions passed in Texas, and the case was considered a historic victory for abortion rights advocates.

“Women have a fundamental right under the Constitution to access abortion care,” Toti said. “And that [Whole Woman’s Health] decision has a huge precedential effect—it was joined by a solid majority of justices on the court.”

But that doesn’t mean there are not a number of other areas where Trump can put pressure on women’s access to reproductive health—especially given the experience of some of his close advisers and Cabinet nominees.

Sessions has been responsible for a pretty extreme anti-abortion voting record during his four terms in Congress. As previously reported by Mother Jones, Sessions voted in favor of an amendment to remove pregnant women from the State Children’s Health Insurance Program, also known as SCHIP, and instead transfer coverage to the fetus itself. (The measure failed.) He has voted to bar Department of Health and Human Services grants from organizations that perform abortions (much in the spirit of the “defund Planned Parenthood” movement that Trump supports). He supported the ban of common dilation-and-extraction abortion procedures—coded as “partial birth abortions”—as well as a criminal penalty for harming a fetus during “a violent crime.” And Sessions voted against a $100 million allocation in the fiscal year 2006 budget toward reducing teen pregnancy through education and contraceptives.

Blackburn is another major figure in the anti-abortion movement. She’s perhaps best known for her role as head of the Select Investigative Panel on Infant Lives, which was formed after the Planned Parenthood sting videos were released in the summer of 2015. The panel was charged with investigating unproved allegations that fetal tissue was being sold for profit. (No evidence has been found that there is any truth to this.) Democrats called out Blackburn for her “reckless disregard” for the safety of abortion providers and researchers after she released unredacted documents that contained their names and contact information.

Trump has said he supports a ban on abortion after 20 weeks and discontinuing federal funding for Planned Parenthood for as long as the organization continues to offer abortion services, even though the nation’s largest women’s health care organization receives no government funds for providing the procedure. In September, Trump wrote a letter to anti-abortion leaders outlining his commitment to eliminating abortion rights. (The letter was released by a conservative women’s organization called the Susan B. Anthony List, whose research arm, the Charlotte Lozier Institute, has claimed that copper IUDs constitute “early abortions.”) He promised to sign a law called the Pain-Capable Unborn Child Protection Act, which would implement a ban on abortions after 20 weeks on the assumption that a fetus can feel pain at that point. (This notion has been disproved.) He also said he would make permanent the Hyde Amendment, which prohibits federal Medicaid funding for abortion.

The battle over whether Planned Parenthood keeps its federal funding to provide screenings and health care for low-income women is likely to  continue. In September, President Barack Obama proposed a change to Title X funding that would forbid states from withholding funds for any reason other than the provider’s “ability to deliver services to program beneficiaries in an effective manner.” Obama’s proposal is pending a review of the results of a 30-day public comment period by the Department of Health and Human Services. If the measure fails, it will be one less barrier to Trump’s promise to defund Planned Parenthood. This rule wouldn’t end the battle over Planned Parenthood, but it would make it significantly more difficult for federal funds to be stripped from the provider, and it would push the fight back to the states, likely in the form of overly stringent regulations.

Obamacare, or the Affordable Care Act, is also in the line of fire. Trump’s initial promises to completely eliminate the program have changed since his election victory, and he told the Wall Street Journal that he may consider keeping in place some of its provisions such as coverage for preexisting conditions and the ability for young adults to remain under their parents’ insurance. But the ACA also covers one type of birth control per user at no out-of-pocket cost. Trump has not specifically mentioned it so far, but Vice President-elect Mike Pence told conservative Christian radio host James Dobson last October that he is motivated by religious liberty when it comes to the future of the mandate, intimating that he would work to end it.

Coverage of birth control might be at greatest risk because its repeal does not require congressional approval. The Trump administration would only have to order the Department of Health and Human Services to exclude birth control from preventive care by redefining preventive care. Even if this were to happen, changes would not be in effect until 2018 and several plans under the ACA would still include birth control—although the options could become more limited.

Raegan McDonald-Mosley, the chief medical officer at Planned Parenthood Federation of America, said her organization has seen a 900 percent increase in appointments for IUDs since the election results were announced.

“These spikes illustrate just how important the Affordable Care Act’s birth control benefit has been for women to access the birth control method of their choice,” McDonald-Mosley said. “Without coverage, out-of-pocket costs for IUDs can range from $500 to $1,000, which can be a major barrier for some women.”

I don’t think that [anti-choice] Congresspeople are as much benign and misguided as they are intentionally and willfully ignorant of the facts of reproduction.”

But the greatest concern among providers and reproductive rights activists is that lawmakers in conservative states will be further emboldened by an anti-choice presidential administration and by a Republican, largely anti-choice majority in Congress. Dr. Willie Parker, an abortion provider who practices primarily in Alabama and Georgia, and serves as board chair for Physicians for Reproductive Health, said there has always been and may always be “willful ignorance” when it comes to legislation around reproductive rights.

“There’s this saying, ‘You can’t awaken somebody that’s pretending to be asleep,'” Parker said. “We are in the midst of an intentional anti-intellectualism. I don’t think that [anti-choice] Congresspeople are as much benign and misguided as they are intentionally and willfully ignorant of the facts of reproduction, and that lends itself very well to them being ideologically driven and carrying out agendas.”

Parker also works in the last abortion clinic in Mississippi, and he’s been an active part of the fight to keep it open. He is a plaintiff in a lawsuit filed in 2012 to block a law that required providers to have admitting privileges at a local hospital but would have effectively shut down the last abortion clinic in the state; he and his co-plaintiffs have won the case in the 5th Circuit twice. However, he said, the state has decided to persist even in the face of the Supreme Court ruling, based on the hope that a Trump administration and the appointment of a new conservative Supreme Court justice would improve their odds of winning.

Mississippi isn’t the only state that’s down to one clinic—Arkansas, Missouri, North Dakota, South Dakota, and Wyoming are in similar situations. And Texas lost more than half its clinics in the fight over a law known as HB 2 before the Supreme Court ruled last summer.

“The task of those who support reproductive rights and reproductive justice didn’t change based on who is in the White House,” Parker said. “We don’t know exactly what [Trump] is going to do, but we can’t take the position of ‘wait around and see.’ We have to work as if the things that we fought hard to protect for women were under assault, and we have to bring all of our creativity and our energy to bear to preserve those things.”