To see our latest updates on polling problems, click here.

For months now, voting rights advocates have expressed concern over possible voter suppression at the polls on Election Day. This is the first presidential election since the Supreme Court’s decision in Shelby County v. Holder, the 2013 ruling that gutted the sections of the 1965 Voting Rights Act that had given the Justice Department the power to monitor election law in areas with histories of voting discrimination. Following the 2013 decision, Supreme Court Justice Ruth Bader Ginsburg warned that without these VRA protections, discrimination at the polls, particularly against minorities, was likely to increase. “Just as buildings in California have a greater need to be earthquake­ proofed,“ she wrote in her dissent, “places where there is greater racial polarization in voting have a greater need for prophylactic measures to prevent purposeful race discrimination.” 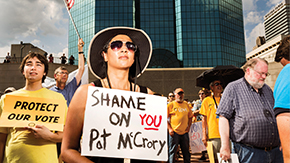 Inside the Knock-Down, Drag-Out Fight to Turn North Carolina Blue

In recent months, concerns over potential voter suppression have proved to be prescient. A report published last week by The Leadership Conference Education Fund found that counties once covered by the VRA’s Section 5—one of the rules diluted by the Supreme Court—have closed at least 868 polling places in advance of the 2016 election. In addition, 14 states will be operating under new voting restrictions this election, including voter ID requirements, while the Justice Department’s capacity to monitor the implementation of those laws is weakened. Another consequence of the Shelby County decision was the DOJ announcement in July that the department had to slash the number of election monitors it would send to the polls, from more than 780 observers in 23 states in 2012 to just a handful of observers in five states. On Monday, the department announced that instead it would deploy more than 500 election monitors to 67 jurisdictions in 28 states.

Donald Trump has often asserted that the election will be “rigged” against him. On his website, he has encouraged his supporters to sign up to be a “Trump election observer” and monitor polling stations for what he says will be voter fraud. In response, state Democratic parties have filed voter intimidation lawsuits against the Trump campaign in six states—Arizona, Pennsylvania, Nevada, Ohio, Michigan, and New Jersey. So far, the Ohio case is the only one where a federal judge issued a restraining order against the Trump campaign compelling them not to intimidate or harass voters at the polls, and that did not last long: This week, a panel of judges from the 6th Circuit Court of Appeals overturned the Ohio judge’s restraining order, and on Monday the Supreme Court upheld that decision.

But allegations of voter intimidation, improper voter ID practices, long lines, and even guns at the polls have been rolling in since the start of early voting across the country—in some states it begins as early as late September. We have collected some reports of problems and will continue to update this post until the last polls close on Election Day. Click on each state below to see a list of the reports we’ve gathered so far. (And if you experience or witness issues at the polls, send us a tweet or an email.)

8:43 p.m.: In Arizona’s Maricopa county, a local judge shot down a request to extend voting hours after a series of issues with electronic poll lists, according to CNN.

7:43 p.m.: In Fort Bend, Texas, a man is arrested for trying to vote twice. He tells police that he is a Trump supporter who was trying to test the voting system.

Arrest: We can confirm 1 arrested for attempting to vote a second time. Claimed he worked for Trump and was testing the system.

7:30 p.m.: Portions of three polling places in Waukesha County, Wisconsin ran out of ballots for about two-and-a-half hours. The shortage left voters with two other options for casting a ballot, but about 150 voters opted to come back later to cast their ballots.

7:10 p.m.: One person was killed and at least three others were shot in Azusa, California, after a gunman fired at least 20 shots from a rifle near two middle schools that are being used as polling stations. There is no indication yet whether the shooting is election-related.

6:50 p.m.: A judge ruled that polls in Dover, New Hampshire will stay open an extra hour, after the city sent out an email inaccurately saying polls would close at 8 p.m.

6:36 p.m.: A judge ruled that a polling place at a high school in Madison, Wisconsin will be allowed to stay open an extra hour, until 9 pm central time, because a fire alarm earlier in the day—caused by a stray soccer ball—caused an evacuation.

4:47-5:16 p.m.: The voter registration system for Colorado went down for just under half an hour. In an emergency court hearing, Colorado democrats requested that the polls stay open an extra half hour.

4:20 p.m.: A judge in Dallas County, Texas ruled that all polls in the county will stay open two extra hours, until 9 p.m. central time, after morning voting delays that were caused by the overnight death of election judge Gary Cox.

3:00 p.m.: A judge in Nevada turned down a last-minute appeal by the Trump campaign to preserve evidence for a challenge the campaign filed with the Nevada secretary of state. Alleging that ballots were cast illegally during the early-voting period in a heavily Latino county, the challenge is seen as an attack on Latino voting and could be used if the campaigns wants to claim that the election was rigged.

2:30 p.m.: The clerk of Ingham County says a man in East Lansing attempted to keep two hijab-wearing women from casting ballots at their local polling place this morning.

1:50 p.m. (approximately): Outside a polling place in Spring, Texas, police spoke to a man sitting by a sign that says “Faggots Vote Democrat.” The man told police he is carrying a gun. He was later detained by police after moving closer to the polling place.

This guy says he has a Glock on his hip https://t.co/POyimIkjvm

1:15 p.m.: The Trump campaign files a lawsuit against the Clark County, Nevada, registrar, alleging that polls were kept open “2 hours beyond .. closing time” against the rules during early voting.

11:50 a.m.: Conservative political activist James O’Keefe, known for secretly-recorded, selectively-edited audio and video of left-leaning groups, circulated a fundraising pitch containing unsubstantiated reports of voter fraud, like GOP poll workers being kicked out of some Pennsylvania polling places, and Mexicans being bussed over the border to vote in California. Earlier, he sent a tweet showing him following a pastor’s bus transporting voters to the polls. (Providing transportation to polls is legal.)

In Philadelphia tailing a pastor’s bus that’s bussing people to the polls. #VeritasIsEverywhere & we will catch your #VoterFraud. @PhillyGOP pic.twitter.com/FY9UPOQolp

11:49 a.m.: Jefferson Riley, the Republican mayor of the 400 person town of Mansfield, Georgia, wrote a public post on his Facebook page misleading Democrats about when to go to the polls. “Remember the voting days: Republicans vote on Tuesday, 11/8 and Democrats vote on Wednesday, 11/9.” He later removed the post after a flood of social media criticism and told the Atlanta Journal Constitution that it was a joke.

Wow. Just got this screengrab from a friend. Jefferson Riley, the Republican mayor of Mansfield, Georgia trying to fool Democratic voters. pic.twitter.com/g2JpxdxBUX

11:38 a.m.: The Durham County Board of Elections unanimously asked the state board of elections to extend voting hours by an hour and a half due to reports of long lines and lack of resources at polling places.

11:22 a.m.: A man and a woman at the Jupiter Community Center in Jupiter, Florida, got into an argument related to Donald Trump. After the man got too close to the woman, the woman fired mace at the man. Police cleared the scene, according to a local news report.

November 8, 10:30 a.m. E.S.T. (approximately): On a press call with the Lawyers Committee for Civil Rights Under Law, which is running the National Election Protection Hotline, advocates reported a number of concerns.

11/07: The North Carolina GOP boasted in a press release that African-American early voting had decreased 8.5%.

11/07: A sheriff’s deputy turned voters away in Akron, Ohio as hundreds lined up for early voting Monday. Voters had to be in line by 2 p.m., according to Jon Swaine of the Guardian.

11/07: A federal judge denied the Pennsylvania Democratic Party’s request for an injunction preventing the Trump campaign from harassing voters at the polls.

11/06: In Cincinnati, Ohio, more than 4,000 people waited hours to vote at Hamilton County’s (population 800,0000) only in-person early voting location. The line spanned half a mile.

11/05: A judge found that three North Carolina counties did in fact illegally purge voters from the rolls and ordered that they be allowed to cast ballots.

11/04: Voters in Loudon County, Virginia reported a man with a holstered gun was asking people who they were going to vote for.

11/03: After the NAACP filed a lawsuit alleging that several counties in North Carolina were purging names from voter rolls, the Justice Department announced it would send election monitors to four state counties.

11/01: In Nevada, the DNC took the RNC to court, alleging that they were conducting illegal poll-watching in the state.

10/27: Civil rights advocates said that the eligibility of about 4,500 voters across three counties in North Carolina had been challenged, with many being illegally removed from the polls

10/20: A federal judge shot down an ACLU lawsuit that sought to extend the voter registration period for Georgia voters who could not get registered in time after Hurricane Matthew