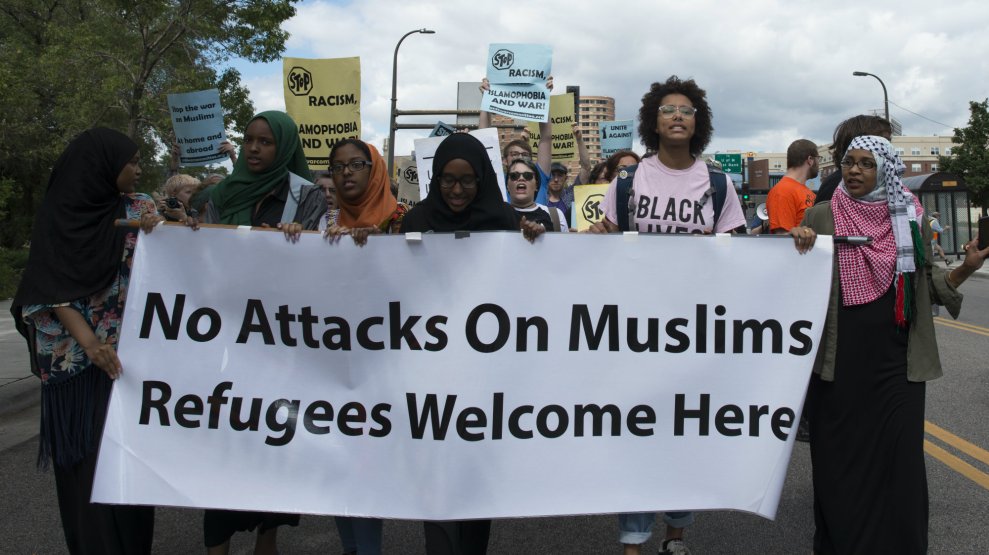 A march against xenophobia in Minneapolis, Minnesota, on September 17, 2016.Fibonacci Blue/Flickr

There were 5,850 hate crimes in the United States last year—a 7 percent increase over the year before—according to new data released by the FBI on Monday. The main reason for the increase was a massive 67 percent spike in crimes targeting Muslims.

The xenophobic rhetoric of Donald Trump could be a factor in the hate crime spike, says one expert.

The numbers landed amid an apparent spike in attacks on ethnic and religious minorities in the wake of Donald Trump’s election as president. This news comes as no surprise to anti-extremism groups like the Council on American-Islamic Relations and the Anti-Defamation League, which have documented a rise in hate crimes for more than a year.

But as stunning as this new data is, it’s probably incomplete: Even by estimates from other federal agencies, the FBI’s figures don’t actually count the vast majority of US hate crimes. Here’s a quick guide to what the new numbers mean—and why they don’t tell the whole story.

Which groups are most likely to be the victims of hate crimes?

But that’s not the whole story.

The FBI has collected data on hate crimes since Congress passed the Hate Crime Statistics Act in 1990. The agency traditionally defined hate crimes as those committed because of a person’s race, ethnicity, or religion, but the Obama administration has since expanded the definition to include sexual orientation, gender and gender identity and mental and physical disabilities.

The vast majority of hate crimes don’t get reported to law enforcement in the first place.

Yet despite the FBI’s annual tally, it’s still unclear how many hate crimes happen every year. The FBI generally reports between 5,000 and 7,000 hate crimes a year, according to an Associated Press investigation of national hate crime data. But in a 2013 report, the Department of Justice estimated the average annual total count at more like 260,000. That’s more than 44 times more hate crimes than the FBI data suggests. And while the FBI reports that just over a third of hate crimes were violent attacks on people in 2015, the DOJ estimated that 92 percent of hate crimes involved violence. The DOJ’s report was based on anonymous responses to the National Crime Victimization Survey, which the Bureau of Justice Statistics conducts every year.

Comparisons between earlier FBI hate crime stats and other data sets from the federal government also reveal discrepancies. In 2013, for example, the FBI reported that there were 100 hate crimes on college campuses—but the Department of Education counted 781.

Why is the FBI’s data so incomplete?

It’s likely that even the agencies that did participate underreported hate crimes. About 88 percent of the nearly 15,000 departments that participated last year tallied zero hate crimes—including departments in cities with storied histories of racial violence like Tulsa, Oklahoma; Mobile, Alabama; and Baton Rouge, Louisiana—according to an analysis by the Anti-Defamation League. Departments in many sizable cities reported just one, two, or three hate crimes. Participation in the FBI’s program is consistently limited among many departments across Southern states.

But the vast majority of hate crimes don’t get reported to law enforcement in the first place. According to the DOJ’s study, just 35 percent of hate crimes victims reported the crimes to police on average. Victims keep quiet for different reasons—distrust of the police, a belief that law enforcement won’t help them, fear of disclosing their sexual orientation—says Jack Levin, a hate crimes expert at Northeastern University in Boston.

Many police officers don’t understand how hate crimes are defined, or why it’s important to report them, explained the Anti-Defamation League’s Allison Padilla-Goodman in a Mother Jones in an interview in May.

Hate crimes against African Americans are particularly underreported in the South, notes Levin. Five states—Arkansas, Georgia, Indiana, South Carolina, and Wyoming—don’t have hate crime laws on the books at all, and some state hate crime laws don’t protect sexual orientation or gender identity. Only 23 states and DC require police departments to keep data on hate crimes in their jurisdictions. But even some departments that do track hate crimes—and report them to state officials—don’t ultimately report them to the FBI, sometimes because of the burdensome paperwork involved, says Michael Lieberman, who serves as legal counsel to the national ADL.

In California—which consistently reports more hate crimes than any other state—officers receive instruction on hate crimes in the training academy, and police departments are required by state law to report details on all hate crimes to the state attorney general. Many large departments in California—like in San Francisco and San Jose—also have designated units that investigate hate crimes. But smaller departments—like most around the country—don’t have the resources for that kind of specialization, Lieberman says.

In any case, what drove the increase in hate crimes last year?

It could be a number of things. Retaliatory hate crimes against Muslims in response to devastating terror attacks in France, Brussels, and San Bernadino, California, likely played a role, says Mark Potok, an expert on extremism at the Southern Poverty Law Center. He noted the sharp spike in crimes against Muslims that followed 9/11. Pushback against the global refugee crisis—and calls for resettling Arab and Muslim immigrants in the states—may also be at play, Levin said. And the xenophobic rhetoric of Donald Trump—who dominated the news cycle for half the year after declaring his candidacy in June, Potok noted—could also be a factor.

How can we make sure hate crimes don’t continue to rise?

In the wake of the new FBI statistics, the ADL has urged more vigorous efforts by law enforcement to collect hate crime data nationwide. Levin, too, says that now is the time to send a message to would-be hate offenders. “The perpetrator was sending a message when he commits the hate crime,” he said. “We need to send a message back that we as a society will not tolerate this kind of intolerance. That we don’t encourage and support the perpetrator. That we are not hate-filled people.”