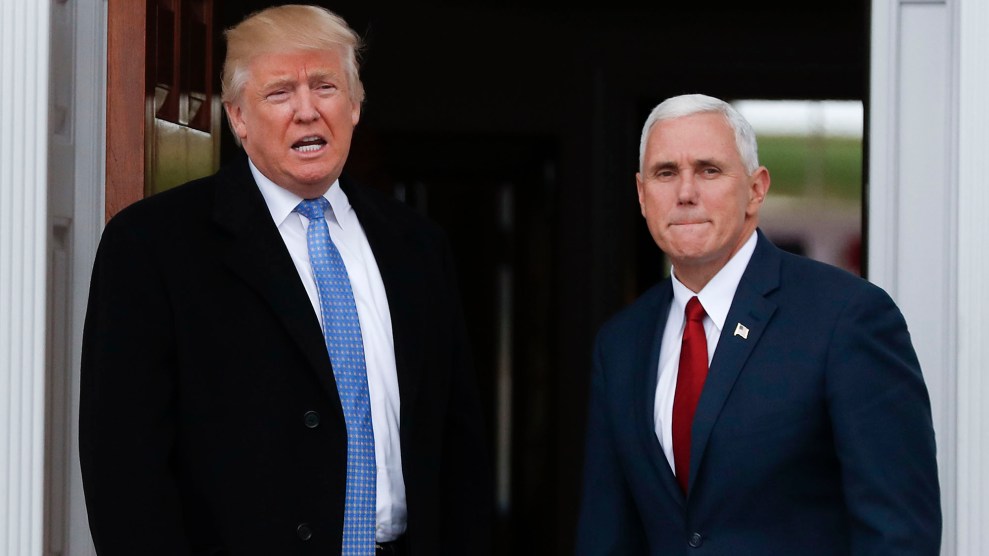 President-elect Donald Trump and his team are celebrating the announcement that a company that came under fire for planning to move 1,400 jobs to Mexico will keep around 1,000 of those jobs in Indiana. The announcement late Tuesday came after Trump and Vice President-elect Mike Pence, the outgoing governor of Indiana, applied pressure to Carrier, an Indianapolis furnace manufacturer, to keep jobs in the state. At a rally in April, Trump had promised “100 percent” to rescue the jobs at the plant, and Trump and Pence plan to visit Indiana this week to publicize the victory.

But there are still questions about what kind of deal was struck to persuade the company to keep production in the state. Any deal-making would be an about-face for Trump, who as recently as last month derided government incentives to keep companies in the United States.

Trump made the same point in August at a rally in Erie, Pennsylvania. (The Democratic super-PAC and opposition research outfit American Bridge found these examples and shared them with Mother Jones.) “Over the years, I’ve watched, for years, for 10 years, for 12 years, for 15 years, beyond Obama, and I’ve watched as politicians talked about stopping companies from leaving our states,” Trump said. “Remember, they’d give the low-interest loans. Here’s a low-interest loan if you stay in Pennsylvania. Here’s a zero-interest loan. You don’t have to pay. Here’s a this. Here’s a tax abatement of any kind you want. We’ll help your employees. It doesn’t work, folks. That’s not what they need. They have money. They want to go out, they want to move to another country, and because our politicians are so dumb, they want to sell their product to us and not have any retribution, not have any consequence. So all of that’s over.”

If the Indiana deal is any indication, however, these kinds of corporate incentives are not over yet. Neither Trump nor Carrier, which is owned by Indiana-based United Technologies, has disclosed the terms of the deal. CNBC reported that the state of Indiana offered the company incentives to stay. The report also indicated that the company may have chosen to keep the factory in Indiana in order to curry favor with the new administration. United Technologies does lucrative work for the US government making engines for military jets.

Trump was correct that without strict enforcement mechanisms, incentives often fail to keep jobs in the country in the long term if the company stands to make more money by shifting production abroad. Even as Trump has apparently stopped Carrier’s relocation for now, a company a mile away is in the process of shutting down its plant and sending nearly 300 jobs to Mexico. Both Carrier and the second company, Rexnord, had already benefited from tax incentives to stay in Indianapolis when they both decided to move operations to Mexico. Carrier had agreed to pay back $1.2 million to the city. The Indianapolis Star reported in August that under Pence, the Indiana Economic Development Corporation had awarded $24 million in incentives to companies that sent production overseas. Of that sum, $8.7 million had already been paid out.

Trump had railed against corporate welfare long before he launched his presidential campaign. In 2011 and 2012, he repeatedly criticized the Obama administration’s loans to Solyndra, the solar technology company that declared bankruptcy in 2011 despite receiving a $535 million federal loan guarantee through the 2009 stimulus package. “Washington is wasting over $2 billion this year on Solyndra type loans,” Trump tweeted in October 2011. The following March, he tweeted that President Barack Obama “has wasted billions of our tax dollars on speculative green projects like Solyndra. He is an economic ignoramus.”