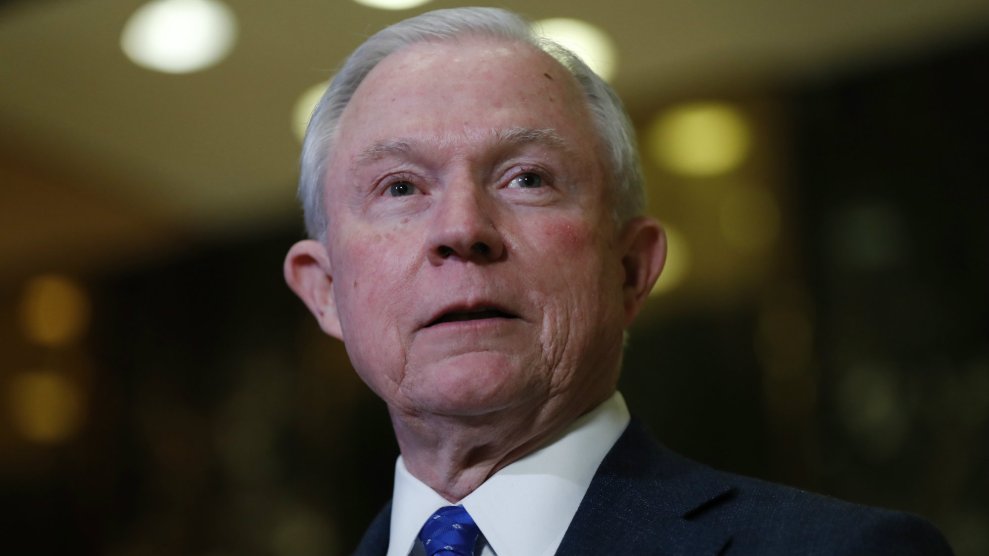 Civil rights groups were horrified last week when Donald Trump announced that he would nominate Sen. Jeff Sessions (R-Ala.) to be his attorney general. Sessions—who was the first US senator to endorse Trump and advised the president-elect throughout his campaign—is best known in civil rights circles for his aggressive anti-immigration stances and a series of racist comments he allegedly made early in his career. But there’s another area where he has staunchly opposed an expansion of civil right protections, and where he could hold outsize power as attorney general: LGBT rights.

Sessions ardently opposed the 2009 Matthew Shepard and James Byrd Jr. Hate Crimes Prevention Act. The act extended federal hate crime protections to people victimized because of their sexual orientation, gender or gender identity, or disability. (Federal law already covered race, ethnicity, and religion as protected classes.) It also expanded the kinds of crimes that could be federally prosecuted under the hate crime statute, as well as the feds’ potential involvement in those prosecutions.

The bill passed over Sessions’ objections—but now he could effectively neutralize it as attorney general. The law mandated that the attorney general—or a designee—sign off on all criminal prosecutions brought under the act. Given Sessions’ opposition to the bill, some civil rights groups fear that, as attorney general, Sessions would not aggressively enforce the law. “I think it remains a legitimate question as to how vigorous Mr. Sessions will be in prosecuting a statute that he was one of the chief opponents of,” says Brian Levin, director of the Center for the Study of Hate and Extremism at California State University.

The FBI documented a 7 percent increase in hate crimes in 2015. Hate crimes against Muslims spiked 67 percent. But members of the LGBT community are more likely to be the victims of hate crimes than any other group. Last week, more than 60 members of Congress wrote to the Department of Justice, urging Attorney General Loretta Lynch and FBI Director James Comey to take steps to improve hate crime reporting. Around 90 percent of the nation’s nearly 18,500 law enforcement agencies did not report hate crimes to the FBI last year or reported that there were zero hate crimes in their jurisdiction.

In a speech on the Senate floor in July 2009 (see the first two videos below), Sessions said people should not be attacked because of their sexual orientation or gender, but he argued that federal prosecution of such attacks was unnecessary because there was no evidence that they weren’t being prosecuted adequately at the state and local levels. He also quoted a letter sent to Congress by the Civil Rights Commission claiming that trying individuals for the same crime at both the state and federal levels—which the law would permit by federalizing certain hate crimes—violated the spirit of the Constitution’s ban on double jeopardy, even if it was not technically unconstitutional.

But Sessions also expressed a bizarre fixation on the bill’s effect on prosecution of rape cases throughout the country (see the third video below).  Sessions cited the Commission letter to argue that the bill’s hate crime protections would be triggered not only when the perpetrator of a crime had an animus toward a particular group, but also whenever the victim happened to be a member of a particular group. “That could give federal jurisdiction, for the first time in history, to every rape that occurs in America,” Sessions said—now expressing his own concerns—because rapists often pick their victims because they are women.

He went on to suggest that the bill violated the equal protection clause of the Constitution by imposing different penalties on rapists depending on their motivations. “Is a legitimate justifiable reason to punish one rape differently than another rape, simply because someone decided that the first rape was committed out of hate—or actually, because of the gender of the victim?” he asked. “I think the victims would say the same thing: The criminal should be punished to the fullest extent of the law.”

The hate crime law in the state of Alabama does not include sexual orientation or gender identity among its protected classes. Most of the state’s police departments also do not report hate crimes to the FBI. In 2015, Alabama, with a population of nearly 4.9 million, reported just 10 hate crimes. Police departments in neighboring Tennessee, with a population of about 6.6 million, reported 221.