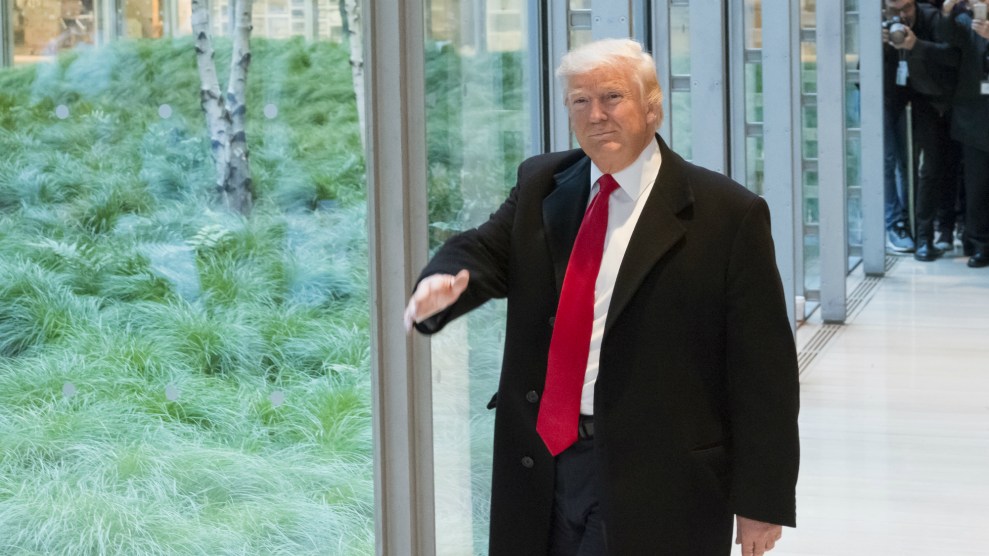 During a meeting with New York Times reporters on Tuesday, Donald Trump brushed off questions about his conflicts of interest. “The law’s totally on my side,” he said, “the president can’t have a conflict of interest.” The president-elect’s global business empire, of course, creates a morass of ethical issues that no American president has ever faced. Yet he is at least partly correct when he says the law is in his corner. The president, unlike other federal employees, is not bound by conflict of interest rules. An obscure and hard-to-enforce constitutional clause intended to prevent US officials from being influenced by foreign governments could apply to Trump. But ultimately only Congress can investigate him for violating this constitutional provision or hold him accountable for conflicts of interest related to his business interests.

As Trump moves closer to taking his place in the White House, the magnitude of his business entanglements has grown only more dizzying. He owes hundreds of millions of dollars to foreign lenders, including the government-owned Bank of China. He has business interests in countries including Turkey, Malaysia, India, the Philippines, and Argentina; over the past two years, he has set up companies focused on business opportunities in China and Saudi Arabia. And his new DC hotel poses a double conflict: Not only do foreign dignitaries reportedly feel compelled to stay there during visits to the capital but the property itself was leased from the federal government, which means that Trump’s company may have to negotiate with his administration.

Trump has said he will place his assets in a “blind trust” run by his children, but, by definition, knowing who controls the assets and what they are means this arrangement is not a blind trust. There are no requirements that Trump take any steps at all to divest himself of his holdings. But by tradition, presidents have often handed their assets over to independent third parties to manage—that is, creating actual blind trusts—to reduce even the appearance of a conflict. “People have typically taken steps to silo these different aspects of their lives, because there should not be a doubt in the minds of the American public that the leader of the free world is not going to be putting certain interests over the public’s,” George Washington University law professor Jessica Tillipman told Mother Jones this summer. “And when you haven’t taken affirmative steps, it leaves an open question.”

If Trump isn’t concerned about the appearance that his official actions could be swayed by his business interests, then he should worry about the prospect of damaging congressional inquiries that could mire his administration in controversy, say several ethics experts. Republicans, who cried foul over Hillary Clinton’s entanglements with the Clinton Foundation, have been largely silent on Trump’s array of conflicts. Where his presidency could take a nightmarish turn is if Democrats regain control of either house of Congress. Already, Democrats on key oversight committees have signaled what could be in store for Trump. On Tuesday, Democrats on the House Financial Services Committee sent a letter to the inspectors general of eight agencies highlighting Trump’s relationship with Deutsche Bank. The German bank, which holds more than $300 million in Trump’s debt, has been the target of a Justice Department investigation into its sale of bad mortgage-backed securities in the run-up to the 2008 financial crisis.

The most serious potential investigation into Trump’s business empire would involve a constitutional provision known as the emoluments clause. The Founding Fathers inserted this measure into the Constitution to prevent European monarchs from corrupting American officials with titles of nobility or lavish gifts. In Trump’s case, the rule can be read to apply to any dealings connected to a foreign government, such as his partnership in a real estate venture that received financing from the Bank of China. The terms of that loan could be scrutinized in light of the emoluments clause, several constitutional law experts told Mother Jones, as could other Trump investments if there is a sense that he received some preferential treatment from a foreign government.

But even an investigation into whether Trump violated the emoluments clause is unlikely to produce any real action, short of embarrassing the president. “The problem is that the clause doesn’t really have an obvious enforcement mechanism in cases where the violator can’t be fired,” says Stephen Vladek, a constitutional law professor at the University of Texas. “Congress could of course conclude that violations of the Clause are impeachable, but that seems like a non-starter with the incoming Congress. So it’s an issue, but one that may ultimately have to be left to the political process.”

Richard Painter, who served as the chief ethics lawyer for the George W. Bush administration, agrees. He notes that watchdog groups or individuals would likely not have standing to sue over a potential emoluments clause violation. The matter is almost entirely in congressional hands.

The Trump Organization certainly provides a target-rich environment for congressional investigators seeking to probe Trump’s foreign ties. In Azerbaijan, Trump partnered on a hotel project with the controversial son of a billionaire government minister—one who US diplomats suspected of being involved with an Iranian military money laundering operation. In Turkey, Trump’s company manages a hotel owned by the wealthiest man in the country—who also happens to be an enemy of the country’s increasingly authoritarian president. Trump has three resorts under development in Muslim-majority Indonesia with a local billionaire who recently launched his own political party. He has licensed his name to a Filipino investor who was recently named as a special envoy to the United States. Even as he planned his presidential transition, Trump took time off from picking national security officials to meet with his Indian business partners, with whom he built ultra-luxury high-rises in Pune and Mumbai.

Trump’s complex interests create a situation that the country has never faced under any previous administration, says Robert Weissman, president of the good government group Public Citizen. “This set of facts would have been unimaginable until we were presented with him,” he says. Trump has said he is now focused on serving the public’s interests, not his company’s, but that’s unlikely to stop foreign officials and others from trying to influence Trump through his businesses. “Once you have those holdings and you’re aware of your commercial interest, it’s not possible to wall off in your head that consideration,” Weissman says. “That’s why they’re called conflicts of interest.”

In response to questions from Mother Jones, a Trump Organization spokesperson said: “We are in the process of vetting various structures with the goal of the immediate transfer of management of The Trump Organization and its portfolio of businesses to Donald Jr., Ivanka and Eric Trump along with a team of highly skilled executives. This is a top priority at the Organization and the structure that is ultimately selected will comply with all applicable rules and regulations.” Hope Hicks, Trump’s campaign spokeswoman, did not respond to questions.

In a tweet Monday night, Trump dismissed the idea that his business interests were problematic.

Prior to the election it was well known that I have interests in properties all over the world.Only the crooked media makes this a big deal!

But in talking to the New York Times on Tuesday, even Trump expressed surprise that there were no rules that would force him to insulate himself from conflicts. “I’d assumed that you’d have to set up some type of trust or whatever,” he said, “and you don’t.”