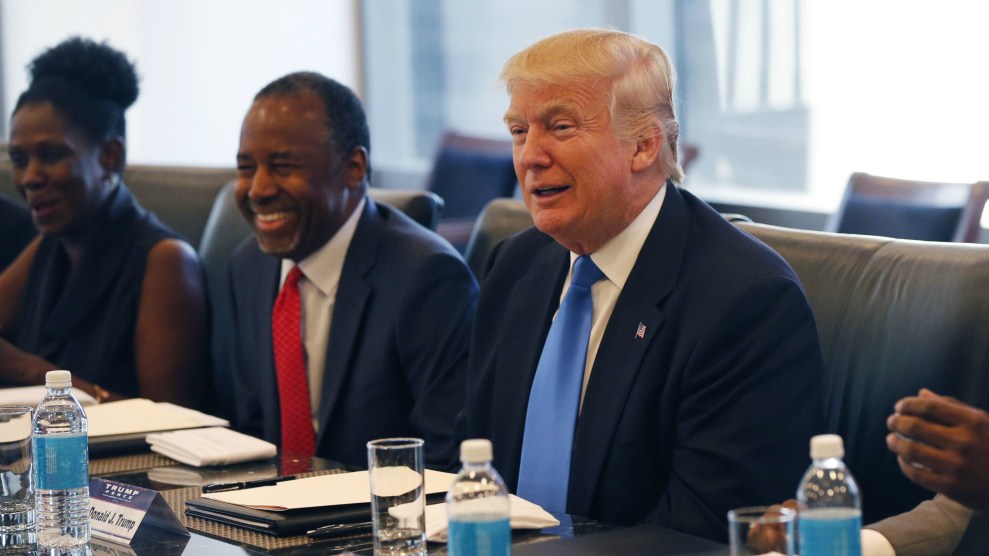 Donald Trump’s selection of Ben Carson as the new secretary of housing and urban development is puzzling. After all, Carson was a world-renowned brain surgeon who has never held a government job before. Recently, a top adviser to Carson noted that the retired doctor was not interested in joining the Trump administration because “he has no government experience, he’s never run a federal agency.” Yet Carson two weeks ago did claim he had sufficient experience for the HUD job, saying, “I know that I grew up in the inner city and have spent a lot of time there, and have dealt with a lot of patients from that area.” But his campaign website’s issues page made no mention of housing policy. And the extent of his public pronouncements on housing seems restricted to an odd statement in which he compared attempts to desegregate public housing to “failed socialist experiments.”

Yet Carson does have experience with real estate and home building, thanks to his association with an investor who once pleaded guilty to committing fraud.

Much of Carson’s personal wealth, estimated to be at least $8 million, is tied up in a handful of real estate deals. These deals were engineered with the assistance of a close friend named Alfonso Costa. Costa was once a successful Pittsburgh dentist, but he went into the real estate game full time after pleading guilty to a conspiracy to commit health insurance fraud. Now Costa runs a successful commercial and high-end luxury real estate empire with properties in Pennsylvania, Florida, New York, Italy, and elsewhere. Costa also heads the Pittsburgh office of Carson’s charity, and he appears to have managed Carson’s real estate investments.

An investigation by Mother Jones last fall showed that Carson’s investments included ownership of a commercial office building in suburban Pittsburgh that netted Carson and his wife between $200,000 and $2 million in 2015. The holding companies used to buy this building were registered at Costa’s home, and Costa managed the buildings on behalf of Carson.

But that’s not Carson’s only apparent involvement with Costa. On his most recent personal financial disclosure forms, Carson listed owning a plot of land in Palm Beach County, Florida, which seems to be a rather grand horse farm:

But according to property records, the estate was actually owned by Costa’s real estate development company. For more than a year, it was listed for sale at $10 million, but records show it has never been sold. Sotheby’s currently lists the farm, which includes a riding ring, 22-stalls, brick floors, tack rooms, and a small apartment for a caretaker, for rent at $330,000 a month. Carson’s campaign refused to confirm his role in the investment.

In response to questions from Mother Jones about Costa, Carson a year ago said:

Carson’s relationship with Costa dates back to before Costa’s 2007 arrest and indictment on the health care fraud charge. In a 2013 book, Carson wrote that doctors who commit health care fraud should get “the Saudi Arabian Solution,” although he allowed he “would not advocate chopping off people’s limbs.” But years earlier Carson had appeared in court as a character witness for Costa and had asked the judge to impose a lenient sentence on his friend. At that time, he wrote in a letter to the court, “Next to my wife of 32 years, there is no one on this planet I trust more than Al Costa.”

Carson and Costa have vacationed together, and Carson has spent time at a luxury villa owned by Costa on the Amalfi coast of Italy.

In years past, HUD has been an agency prone to cronyism and corruption. So it might be worthwhile for senators involved in Carson’s confirmation to vet Carson closely and to examine his relationship with a convicted felon.