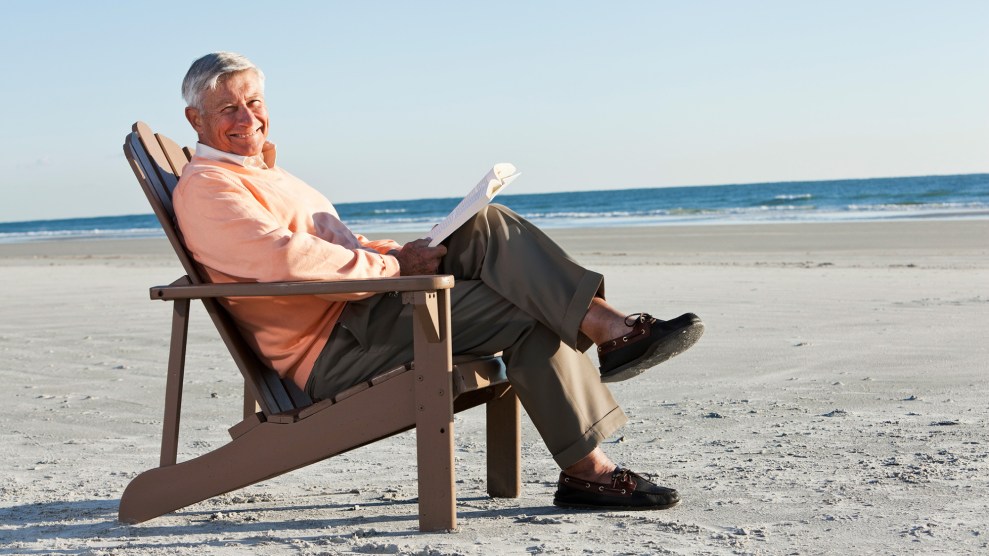 President Barack Obama has called runaway income inequality the “defining issue of our time.” The disparity between exploding corporate profits and stagnating paychecks fueled Bernie Sanders’ presidential campaign and continues to grow. Currently, the United States has a wider gap between the very rich and everyone else than at any time since the late 1920s. And according to a new study from the Institute for Policy Studies, that spells disaster for Americans trying to save enough to retire.

Look at it another way. Those 100 CEOs have nest eggs large enough to generate a retirement check of more than $250,000 per month for the rest of their lives. Meanwhile, the average American fortunate enough to have a 401(k) plan has socked away only enough to receive a monthly check of just $101. And those are the lucky ones: 37 percent of all US households have no retirement savings at all. Neither do 51 percent of African American families and 66 percent of Latino families. Things are also particularly bleak for millennials, as Americans younger than 40 have saved 7 percent less for retirement than similarly aged boomers.

The hollowing out of workers’ retirement benefits punishes female retirees, in particular: Median incomes for women 65 and older are 45 percent lower than men’s. And since women live longer than men, on average, they must stretch their retirement savings even further.

So who are these rapacious retirees? Many of them head companies that have been cutting back on worker pensions and retirement funds for years. John Hammergen, the CEO of the pharmaceutical giant McKesson, holds nearly $150 million in retirement assets. Shortly after joining the company in 1996, he closed its pension fund to all new employees. Yet Hammergen found enough money to set up a retirement account that has furnished him with assets worth more than $20,000 for every day he’s spent at the company’s helm.

Walmart CEO Doug McMillon already had $67.8 million stashed in an untaxed, deferred compensation account in 2015, despite having only held his post since 2014. His predecessor, Michael Duke, retired with more than $140 million in deferred compensation. In contrast, fewer than two-thirds of Walmart’s 1.5 million employees have a company-sponsored retirement account. Those who do have an average balance of less than $24,000, enough for a monthly retirement check of $131—not even 0.04 percent of what McMillon can expect to take home every month.

Jeff Immelt, the CEO of General Electric, has more than $92 million in retirement assets. Between 1987 and 2011, the company contributed not one penny to employee pension plans, counting on rising stock prices to offset its expected contribution. After the economy crashed in 2008, Immelt froze pensions and closed them to new participants. The company has only funded 67 percent of its outstanding pension obligation to workers and its pension deficit has grown by $5 billion since 2011. During the same time, Immelt’s company-sponsored retirement assets have swelled from $53 million to $92 million.

So how has this happened? Simply, the tax rules are structured in favor of massive executive retirement packages. Ordinary workers face strict limits on how much pre-tax income they invested in tax-deferred plans like 401(k)s. (The current limit is $18,000.) CEOs may participate in regular employee plans, but they also get Supplemental Executive Retirement Plans, which Fortune 500 companies set up with unlimited tax-deferred compensation. Since more than half of executive compensation is tied to stock price, CEOs have direct incentives to cut back on worker retirement benefits to pad their balance sheets. The money saved by those cost-cutting measures goes straight back into executives’ pockets, often tax-free: Corporations may deduct unlimited amounts of executive compensation from their federal taxes so long as it’s “performance based.”

Much of this is the result of Reagan-era policies that worked to prioritize corporate profits and undo the power of unions. Under Reagan, companies began to adopt 401(k)s over pensions, shifting investment risk from employers to workers, as these plans required workers to deduct savings from their paychecks with no guarantee of future benefits. Companies have also reduced retirement benefits by converting workers’ pension assets to cash balance plans, freezing retirement plans, closing retirement plans to new hires, or terminating retirement plans altogether.

Might this get better under President-elect Donald Trump, whose economic message seemingly resonated with white-working class voters? Don’t count on it. If Trump and congressional Republicans cut the top marginal tax rate from 39.6 percent to 33 percent, Fortune 500 CEOs would stand to save $195 million when they withdraw cash from their tax-deferred retirement accounts, according to IPS.