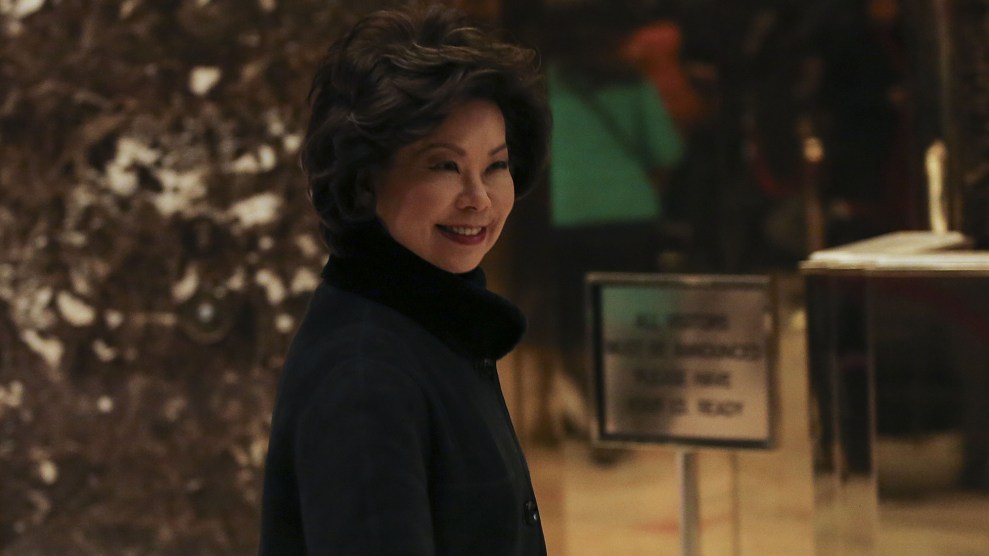 Of all the ways Donald Trump has fallen short of his campaign promise to “drain the swamp” of Washington politics with his Cabinet appointments, none is starker than his choice of Elaine Chao as transportation secretary. Chao is as much of a Washington insider as they come: She served as deputy transportation secretary under George H.W. Bush and as secretary of labor for eight years under George W. Bush. She’s also married to Senate Majority Leader Mitch McConnell, and this year he used his perch to undermine a federal agency that was going after the bank where she works.

Since 2011, Chao has sat on the board of Wells Fargo, earning more than $1.2 million in pay over that period. This year, it was revealed that the bank had fraudulently set up millions of fake accounts that customers had never requested. That activity earned Wells Fargo a $185 million fine from the Consumer Financial Protection Bureau (CFPB), the largest penalty levied so far by the new financial watchdog agency.

The Senate called in Wells Fargo CEO John Stumpf in September, and both Democrats and Republicans attacking the company’s behavior. “This is about accountability,” Sen. Elizabeth Warren, who helped create the CFPB, said at the hearing. “You should resign. You should give back the money that you took while this scam was going on, and you should be criminally investigated.” Stumpf resigned a few weeks later.

But McConnell didn’t quite share that sentiment. Instead, he chose to go after the federal agency that had penalized Wells Fargo. As liberal consumer rights group Public Citizen pointed out, less than a week after the CFPB announced its fine against Wells Fargo, McConnell used his authority to try to fast-track a bill that would defang the CFPB by changing its funding structure.

The bill ultimately failed to advance, although the CFPB could lose significant power under President Trump. And McConnell is far from the only Republican to target the CFPB. But for Trump, who ran a populist campaign decrying the power of Washington insiders and the moneyed interests they support, the selection of Chao for a top administration role seems to show he’s not as opposed to the Wall Street-Washington complex as he might have suggested.