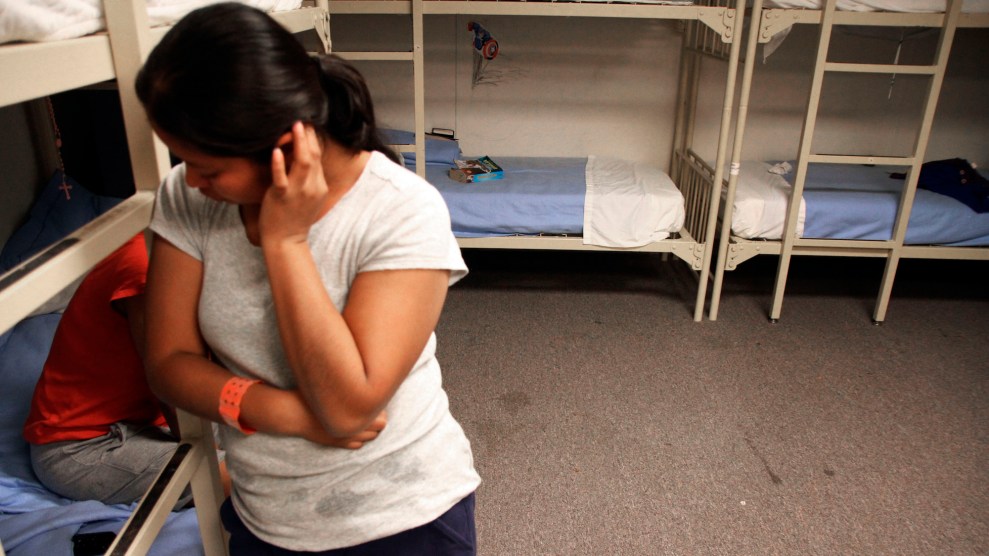 A Guatamalen woman is held in a federal immigration detention facility in New Mexico.Juan Carlos Llorca/AP

Note: This article has been updated and corrected to reflect the outcome of the Homeland Security Advisory Council’s final vote on Thursday, in which it rejected part of the initial report on the use of private prison companies. The original article reflected the expectation that the council would accept all of the subcommittee’s recommendations.

Three months after the Department of Justice announced that it would phase out its use of private prisons, the Department of Homeland Security appeared to be moving in the opposite direction. In a draft report issued on Thursday, a subcommittee of the DHS’s advisory council recommended that Immigration and Customs Enforcement continue to use facilities run by private prison companies to detain undocumented immigrants.

Yet after a protracted discussion, a majority of the advisory council objected to the subcommittee’s recommendation to continue the use of private prisons. In a highly unusual vote on Thursday evening, the council decided to adopt most of the report’s recommendations—including motions to expand funding for inspections and health care—while rejecting the primary finding that Immigration and Customs Enforcement’s use of for-profit immigration detention should continue.

Instead, the council supported a dissent by Marshall Fitz, a member of the DHS advisory council, who disputed the subcommittee’s main conclusion that ICE’s continued use of private detention is inevitable. “The review undertaken by the subcommittee points directly toward the inferiority of the private prison model from the perspective of governance and conditions,” wrote Fitz, a managing director at the Emerson Collective and a senior fellow at the Center for American Progress. “Any shift away from such reliance would take years, carry significant costs, and require congressional partnership…but I disagree that these obstacles require our deference to the status quo.”

The subcommittee, which was tasked with reviewing ICE’s use of for-profit facilities, noted concerns about the agency’s ability to oversee private detention centers as well as reports of substandard medical care in some private facilities. But its draft report concluded that the already widespread use of privately run detention centers, combined with their lower cost, made it unrealistic to seriously consider eliminating their use. ICE reports that it costs $144 per day to keep a detainee in a private detention center while it costs $184 per detainee per day in ICE facilities.

“Much could be said for a fully government-owned and government-operated detention model, if one were starting a new detention system from scratch,” the subcommittee wrote. “But of course we are not starting anew.”

What happens after the final report and dissent are presented to Homeland Security Secretary Jeh Johnson is unclear. ICE will review the report and implement any appropriate changes, according to a department spokeswoman.

In an interview, Fitz said that the decision to reject the subcommittee’s recommendation to continue private immigration detention reflected the council’s overall discomfort with endorsing the private prison model. “Probably all of us [on the council] carry some implicit concerns about how this report will land on a Trump Department of Homeland Security, in a Trump administration,” Fitz said. “It’s inescapable to all of us that there is this underlying concern about what might happen with detention, and with enforcement writ large.”

“Much could be said for a fully government-owned and government-operated detention model, if one were starting a new detention system from scratch. But of course we are not starting anew.”

Johnson ordered the advisory council to undertake the two-month review in August, after the Justice Department declared that it would reduce or end its contracts with private prison companies. The DOJ announcement came on the heels of a Mother Jones investigation into a troubled Louisiana prison operated by the Corrections Corporation of America, the major private prison company that recently rebranded as CoreCivic. Private-prison stocks plunged following the announcement.

But the for-profit prison industry’s slump now appears temporary. The election of Donald Trump caused private prison stocks to soar, and CoreCivic has continued to sign lucrative contracts with both ICE and the Department of Justice. If Trump follows through on his promise to deport millions of undocumented immigrants, it would require ICE to significantly expand its detention capacity, likely by turning to private prison companies.

According to the subcommittee’s initial report, for-profit detention allows ICE to “respond to surges in migration flows” by expanding its detention capacity. “Capacity to handle such surges, when policymakers determine that detention will be part of the response, cannot reasonably be maintained solely through the use of facilities staffed and operated by federal officers,” the draft report stated. Last month, Johnson announced he had authorized ICE to acquire new detention space following a roughly 25 percent increase in undocumented immigrant arrests between August and October.

But the deals this fall were moving so quickly that some ICE officials worried there would be no time to ensure that the new detention spaces conformed to certain quality requirements or regulations adopted as a result of the Prison Rape Elimination Act of 2003, the Wall Street Journal reported. ICE is now pursuing a deal with CoreCivic to reopen the company’s 1,129-bed Cibola County Correctional Center in New Mexico as an immigration detention center, even though the Bureau of Prisons shut down the prison this year following a series of inmate deaths and repeated citations for deficient medical care.

The advisory council’s vote comes less than week after the death of a 36-year-old Guatemalan woman at the Eloy Detention Center, a CoreCivic immigrant detention facility in Arizona. Raquel Calderon de Hildago was arrested near Tucson by Border Patrol officers the day before Thanksgiving. She died on Sunday after having a series of seizures. Calderon was third person to die in ICE custody in the last two months and the 15th person since 2003 to die after being held at Eloy.