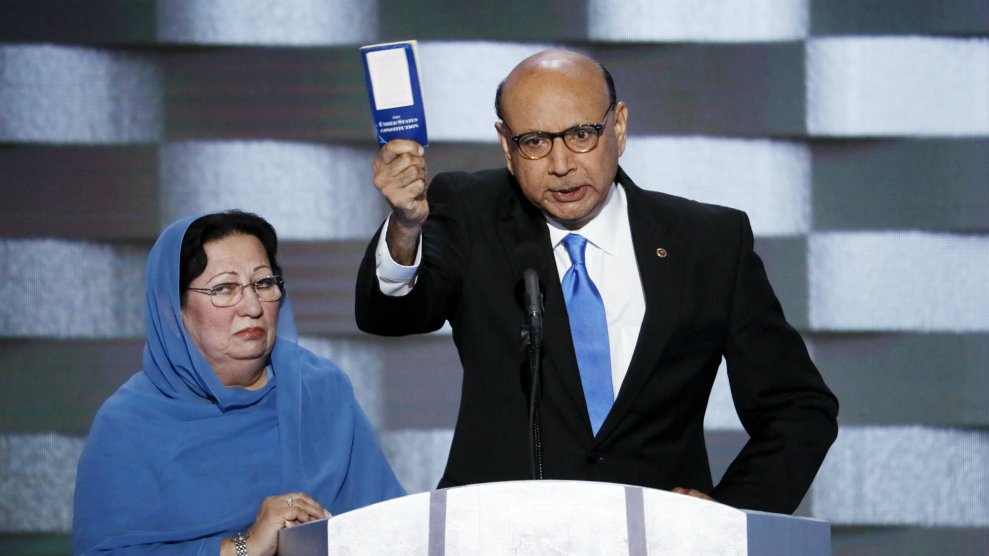 2016 was certainly a bad year. The planet continued to get hotter (spelling doom for future habitants of Earth), natural disasters wreaked havoc all over the world, white nationalists and neo-Nazis stopped hiding on the fringes of society, and Prince, David Bowie, and Carrie Fisher left us way too soon. But before we consider 2016 as being totally bleak, let’s pause and remember a few folks who made a bad year better. From smart kids to activists and politicians, here are some of the bright spots.

Sarah McBride: Sarah McBride made history this year when she became the first transgender woman to speak at a major-party convention. “Will we be a nation where there is only one way to love, only one way to look, and only one way to live?” McBride, the national press secretary for the Human Rights Campaign, asked fellow Democrats gathered to nominate Hillary Clinton. “Or will we be a nation where everyone has the freedom to live openly and equally?” Growing up in Wilmington, Delaware, McBride didn’t think she could live authentically as herself while achieving her professional goals in politics. Since coming out in 2012, she’s been proving her younger self wrong, breaking down barriers and fighting for transgender rights. As an intern, McBride became one of the first transgender people to work in the White House, and she played an instrumental role in getting transgender rights legislation passed in Delaware. She also made waves this year when a bathroom selfie she took in North Carolina went viral after state lawmakers approved legislation barring transgender people from using the bathroom of their choice.

Mari Copeny: Mari Copeny is better known as Little Miss Flint. In 2014, her hometown’s water was poisoned with lead when the city of Flint, Michigan, changed to an improperly treated water supply. It took months to warn Flint residents, and as a result thousands of children in the city tested positive for high levels of lead in their blood. Mari sent a letter to the White House asking President Barack Obama to visit, and Obama responded and visited Flint a few weeks later. Mari’s mother operates a Twitter account for the young girl where she continues to tweet about the ongoing water crisis.

Dinner is done, it took 6 packs of water, so 144 bottles of water #FlintWaterCrisis #ThanksGiving #WaterIsLife

Lindy West: In a year when some of the worst corners of the internet gained new power, Lindy West’s accounts of confronting trolls provided badly needed evidence that you can stand up to cyberbullying and win. In her debut novel, Shrill, West describes what fat shaming really means, a perspective that This American Life host Ira Glass and others have noted changed their perspective on the issue. West’s book, which is a New York Times bestseller, is a delightful yet heart-wrenching collection of essays, spanning subjects from sexism in comedy to finding love. A columnist for the Guardian, she has also argued that objectifying men at the Olympics was not a real issue, and she’s called on everyone to dispense with verbal contortions and just call white nationalists Nazis. (West spoke to Mother Jones earlier this year about internet trolls, fat shaming, and rape culture.)

Tammy Duckworth: The 2016 election wasn’t kind to Democrats, but there were a few winners. Tammy Duckworth will move from the House of Representatives to the Senate, after her defeat of Republican Mark Kirk in the closely watched race for Illinois senator. She is a double amputee and a disabled Iraq War veteran, and she’ll be only the second Asian American to serve in the Senate. During the campaign, Kirk took flack for making a racist comment about his opponent’s family during a debate. Duckworth, who has an American father and a Thai mother, noted that her family has served in the military since the Revolutionary War. Kirk responded by saying, “I had forgotten your parents came all the way from Thailand to serve George Washington.” The Kirk campaign issued a statement attempting to defend his comments, but the embattled senator was met with a barrage of criticism before he tweeted out an apology. Duckworth has also supported accepting more Syrian refugees in the United States.

Michelle Obama: Real talk: Michelle Obama makes every year brighter. But this year especially, she was a force to be reckoned with on the campaign trail. Though she was a fierce critic of Donald Trump from the outset of the election, even the hot-headed president-elect knew better to go after the hugely popular first lady. In an impassioned speech after the release of an audio recording of Trump in which he talked about grabbing women “by the pussy,” Obama lambasted the Republican nominee for “actually bragging about sexually assaulting women.” Not only was she a champion on the campaign trail, but who can forget when Renaissance (her Secret Service code name) appeared on Carpool Karaoke?

The Reverend William Barber II: William Barber II, a charismatic orator and the founder of the Moral Mondays movement in North Carolina, is probably best known for his work in voting rights and economic justice in the state. In 2013, Barber led a group of activists and clergy into the state Capitol building in Raleigh and blocked the doors to the Senate chambers to express his frustration with the Republican-majority Legislature for implementing voting restrictions, blocking Medicaid expansion, and cutting unemployment benefits. He was eventually arrested. This year, at the Democratic National Convention, Barber spoke out against injustice—from voter suppression to police brutality—and his movement has been credited with helping defeat Gov. Pat McCrory in North Carolina. The reverend shows no signs of stopping his work in voting rights and economic justice in 2017.

#NoDAPL activists: The water protectors of Standing Rock, as they call themselves, braved security guards using pepper spray, attack dogs, water cannons in freezing temperatures, and rubber bullets in order to stop the completion of the Dakota Access Pipeline and its threat to the water supply and cultural sites of the Standing Rock Sioux tribe. The tribe opposed to the project and pointed out that pipeline developers had initially planned to follow a different route but rejected it due to concerns about contaminating the water supply to another community. It looked like nothing was going to stop the project, but in November the US Army Corps of Engineers halted construction of the pipeline, calling for research into environmental risks. The win is cause for celebration, but the final battle may lie ahead: President-elect Trump has invested between $500,000 and $1 million in the company with the contract to build the pipeline.

Marley Dias: Marley Dias is a 12-year-old girl who is already tired of reading books about white boys and their dogs. She impressed the world in January when Philly Voice reported that the New Jersey girl was starting a project called #1000BlackGirlBooks to collect books where black girls are the protagonists and not just background characters. The book drive was part of the GrassROOTS Community Foundation, an organization co-founded by Janice Johnson Dias, Marley’s mother, that she uses for a social action project every year. Marley hit her target of 1,000 books by February.

Chris Murphy: One lawmaker who confronted Republicans in Congress this year was Sen. Chris Murphy (D-Conn). After the mass shooting at the Pulse nightclub last June, Murphy refused to let Republicans avoid voting on two gun control measures, one that banned suspected terrorists from buying guns and another that required background checks for sales at gun shows and over the internet. Murphy lead a 15-hour filibuster on an unrelated spending bill until the issue was brought to the floor. He has become one of the leading voices in the Democratic Party on gun control since the 2012 tragedy at Sandy Hook, Connecticut, in which 20 children and six adults were killed by an assailant with two guns. Prior to the election, Murphy explained to Mother Jones why Trump is more radical than the National Rifle Association.

Kamala Harris: The race to replace retiring California Sen. Barbara Boxer came down to two Democrats who were also women of color: Rep. Loretta Sanchez and state Attorney General Kamala Harris. After beating her opponent by 25 points, Harris, who was born to a Jamaican American father and an Indian American mother, became only the second black woman elected to the US Senate. (Carol Moseley-Braun represented Illinois from 1993 to 1999.) After the election, Harris spoke out for undocumented immigrants by vowing to fight Trump’s immigration policies at every turn. “You are not alone, you matter, and we’ve got your back,” she said to immigrants and activists at the Coalition for Humane Immigrant Rights of Los Angeles after her victory.

Khizr and Ghazala Khan: The Khans’ son, Humayun Khan, was killed during the Iraq War in 2004. At the Democratic National Convention, Khizr Khan sharply and movingly criticized Trump for his proposal to ban Muslim immigration. “Donald Trump, you’re asking Americans to trust you with their future. Let me ask you, have you even read the United States Constitution?” Khan asked while pulling out a pocket-sized copy of the Constitution. “I will gladly lend you my copy. In this document, look for the words ‘liberty’ and ‘equal protection of law.'” Khan went on to note the sacrifice his family and other families like his have made:”Have you ever been to Arlington Cemetery? Go look at the graves of brave patriots who died defending the United States of America. You will see all faiths, genders, and ethnicities. You have sacrificed nothing—and no one.” Trump responded by criticizing Ghazala Khan for remaining silent while standing next to her husband, saying that she wasn’t allowed to speak because of the couple’s faith. He also claimed he made sacrifices by building “great structures.” His treatment of the Khans earned him widespread criticism from both sides of the aisle. Thanks to Khizr Khan, the American Civil Liberties Union ran out of pocket Constitutions less than a week after his speech.