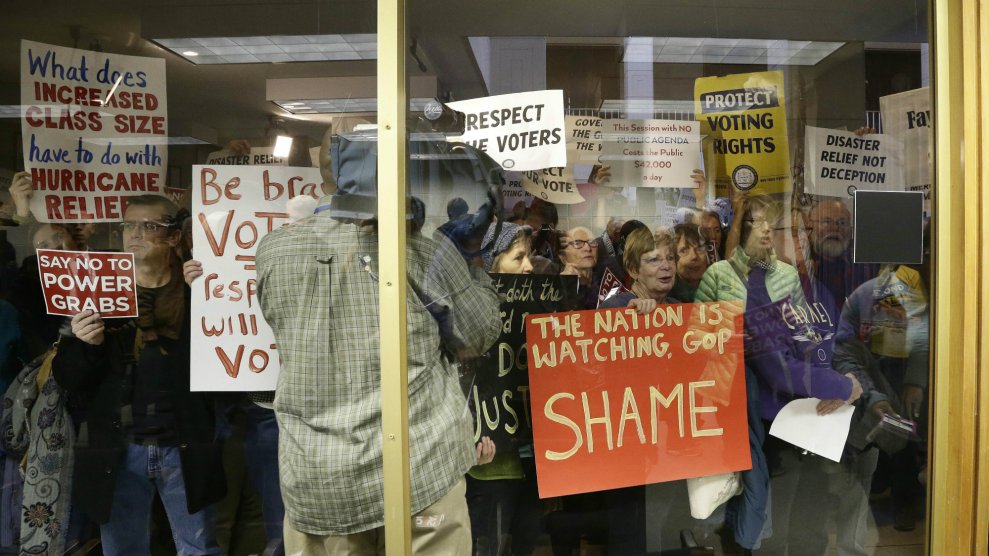 The North Carolina statehouse descended into chaos on Friday as Republican legislators scrambled to pass measures to limit the power of the incoming Democratic governor and protesters were removed from the chambers and arrested.

North Carolina Republicans are seeking to entrench their political power after Democrat Roy Cooper defeated Republican incumbent Pat McCrory in the governor’s race last month. The GOP-dominated state Legislature passed a measure Friday that was quickly signed by McCrory and will effectively give Republicans permanent control of the State Board of Elections during major election years. The Legislature is also considering bills that would drastically reduce the number of political appointees the governor can make and give the state Senate veto power over the governor’s Cabinet picks.

Protesters descended on the statehouse to call on lawmakers to respect the will of the voters. More than a dozen of them have been arrested and kicked out of both the House and Senate chambers during Friday’s special session. General Assembly Police Chief Martin Brock, speaking outside the chambers, said the protests are disrupting lawmakers, and he’ll arrest anyone “leading songs, chants, or cheers.” Even so, protesters continue to speak out and to burst into chants such as “All political power comes from the people!” and “Whose house? Our house!”

Tensions were just as high inside the chamber, where procedural disagreements between Democrats and Republicans led to a shouting match between legislators. Several legislators also complained that the protesters outside prevented them from hearing their colleagues’ remarks. But the noise did not stop the legislators from passing Senate Bill 4, the bill to overhaul the State Board of Elections and reduce the influence of the governor’s party. Democratic legislators have argued that the bill is overly broad and that the special session does not allow enough time to discuss it.

Democratic members of the House continued to debate the purpose of the special session and the lack of notice given to Democrats before it began. “I think we are doing great harm to our body when we don’t give members equal access,” one legislator said. Throughout the session, Democrats have argued that the session is a blatant attempt to curb the powers of the governor-elect. On Thursday, Cooper threatened to sue the Legislature over any new laws he deems unconstitutional.

On a call with reporters, Rep. Keith Ellison (D-Minn.), a leading candidate for Democratic National Committee chair, said that North Carolina Republicans were “undermining the democratic prerogatives of the people of North Carolina” and that the bills passed during the special session “would lead to unprecedented partisan gridlock” in the state. North Carolina Republican Party Chairman Robin Hayes released a statement calling the protesters a “small mob” that violated “the rights of over nine million citizens.”

The News and Observer has a livestream of the commotion in the statehouse:

Update 4:45 p.m.: The state House and Senate passed the bill stripping the governor of power over his own Cabinet and subjecting these appointments to state Senate confirmation. McCrory has yet to sign the bill.

This story has been updated to reflect McCrory’s signing of Senate Bill 4 and the comments from Ellison and Hayes.