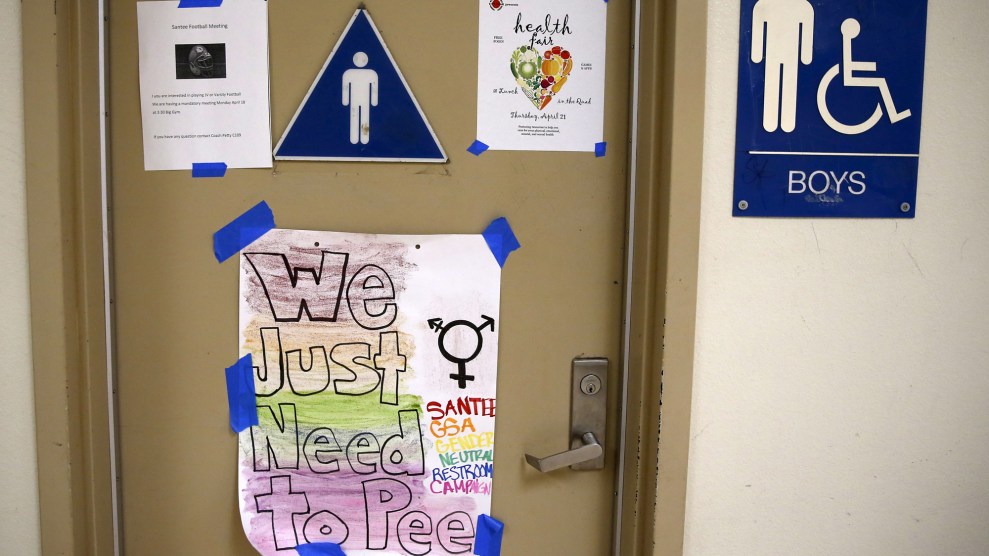 Update, December 21: North Carolina lawmakers did not repeal HB2 in a special session on Wednesday. The state House adjourned without voting on a repeal of the controversial law, while the state Senate voted against a repeal after Democrats and Republicans failed to reach a compromise. Republicans said they would repeal the law if they could also temporarily ban cities like Charlotte from enacting local nondiscrimination protections for gay and transgender people—and Democrats and gay rights leaders were not on board with that proposal. Which means that for now, HB2 stays on the books, even as a majority of North Carolinians say they’d like to see it repealed.

The North Carolina law that famously blocks transgender people from using the bathrooms of their choice appears to be on its deathbed. On Monday, Governor-elect Roy Cooper announced that House Bill 2, seen as the most sweeping anti-LGBT law in the country, would be repealed in a special session of the Legislature.

The announcement came after the city council in Charlotte voted Monday morning to rescind a local nondiscrimination ordinance, passed in February, that had inspired state lawmakers to speed HB2 through the legislative process in a single day in March. In addition to blocking trans people from bathrooms, HB2 preempted local governments like Charlotte’s from passing measures that protect gay and trans people from discrimination.

Republican Gov. Pat McCrory, who passionately supported HB2 and narrowly lost his reelection bid, confirmed he would call a special session of the Legislature on Wednesday to repeal HB2. Governor-elect Cooper said the state Senate majority leader and House speaker had assured him they would kill the law because Charlotte had agreed to get rid of its local ordinance. “I hope they will keep their word to me and with the help of Democrats in the legislature, HB2 will be repealed in full,” Cooper said in a statement.

“Full repeal will help to bring jobs, sports and entertainment events back and will provide the opportunity for strong LGBT protections in our state,” he added. North Carolina lost millions of dollars of revenue after the law passed, as companies protested by canceling plans to bring jobs to the state, Bruce Springsteen and other musicians pulled out of concerts there, and the NBA and the NCAA moved sports events to other locations

Charlotte’s city council had previously refused to rescind its nondiscrimination ordinance. On Monday Charlotte Mayor Jennifer Roberts defended the decision to do so. The vote “should in no way be viewed as a compromise of our principles or commitment to nondiscrimination,” she said.

Outgoing Gov. McCrory, whose popularity fell after HB2 was passed, criticized Charlotte leaders for not getting rid of the local ordinance sooner—and argued they waited for political reasons. “This sudden reversal, with little notice after the gubernatorial election, sadly proves this entire issue originated by the political left was all about politics and winning the governor’s race at the expense of Charlotte and our entire state,” McCrory’s office said in a statement.

LGBT rights organizations praised the plan to repeal HB2, which Human Rights Campaign President Chad Griffin described as “shameful and archaic” legislation. But they added they were disappointed to see Charlotte’s local ordinance go. “The problem has never been Charlotte,” said Equality North Carolina Executive Director Chris Sgro, noting that hundreds of cities across the country have similar ordinances to protect gay and transgender people from discrimination. Mara Keisling, executive director of the National Center for Transgender Equality, said in a statement that the repeal of HB2 could open a door for other cities in the state to pass nondiscrimination protections in the future: “Completely repealing HB2 is only the first step lawmakers must take to repair the harm they have done to their own constituents. Even after it is repealed, there will be a long way to go.”

If the Republican-majority Legislature follows through and repeals HB2, it would be a surprising act of cooperation with the incoming Democratic governor. Just last week, Republican lawmakers in the state introduced a series of bills that would curtail his powers in office.

Correction: An earlier version of this story misstated the date of the special session.