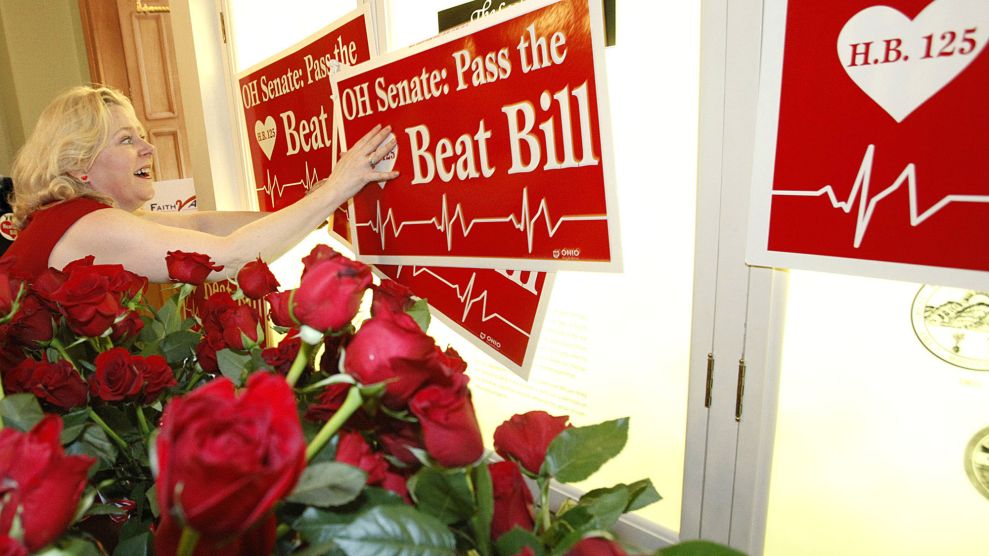 On Tuesday, the Ohio Legislature passed a bill that would make it illegal to get an abortion once a heartbeat has been detected in the fetus. That occurs at about six weeks into the pregnancy, before many women even know they are pregnant. The Ohio measure is now on Gov. John Kasich’s desk for a signature. Citing its unconstitutionality, Kasich has opposed earlier versions of the bill. But it’s a huge win for Janet Folger Porter, a religious right and anti-abortion activist who has championed the heartbeat bill for five years, having written the first version back in 2011.

As Right Wing Watch has reported, Porter, the former legislative director for Ohio Right to Life and the founder of the far-right group Faith2Action, has a colorful record. She promoted conspiracy theories about President Barack Obama and brought in fetuses to testify in front of the state Legislature for the 2011 version of the heartbeat bill. Porter, who lost a bid for the Ohio state Senate this year, says Donald Trump’s win has given anti-abortion activists a “green light” to end abortion. She’s also promised to bring the heartbeat bill to Congress. When she attended the funeral of the famous opponent of the Equal Rights Amendment, Phyllis Schlafly, this fall, Porter says she convinced Iowa Rep. Steve King to introduce a federal version of the heartbeat bill.

Here are some other highlights from Porter’s past:

Her views on religion are too conservative for Christian talk radio

In 2010, Porter’s radio program, called Faith2Action, was canceled by its Christian radio host for drifting too far into “dominion theology,” the belief that the country should be governed by Christians and based on biblical law—for example, the Ten Commandments. (Porter wrote in a post the next week for WorldNetDaily.com that dominion theology is “not what I believe; not even close. We…just want to obey God in every area of influence and use our freedom to spread the Gospel.”)

Since 2007, Porter has written a column for WND where she’s discussed various theories about why Obama is not fit for office, including that he is not a US citizen, that he is a pawn of Russian communists, that he would likely meet personally with Osama bin Laden, and that he might be hiring guards for internment camps of conservatives.

On same-sex marriage, Porter has said Noah’s flood was caused by marriage between men. In 2008, after the California Supreme Court upheld the right to same-sex marriage, Porter warned that civilization could face another natural disaster if the state didn’t reverse that decision. In 2007, she argued that a federal anti-hate-crime bill would set up a “Gay Gestapo with unlimited funds and send grandma to jail.” More recently, Porter has said the 2011 tornadoes that killed some 300 people in the South were the result of, in part, America’s acceptance of abortion, according to Right Wing Watch.

Porter believes Christians are targets of the “gay agenda”

In the days leading up to the US Supreme Court’s historic same-sex marriage ruling in 2015, Porter opined that “homosexualizing marriage” would lead to the criminalization of Christianity. On Colorado State Rep. Gordon Klingenschmitt’s TV program, Pray in Jesus Name, Porter asked people to fast and pray before the ruling. “We need to be able to obey God rather than men,” she said. She was also behind a campaign asking state attorneys general “to file a motion” to rehear the case. In one message, Porter warned that Christians would be “carted off to jail” if gay marriage was legalized.

“Like a tank in Tiananmen Square, the homosexual agenda has been running over people since Anita Bryant’s courageous stand in the 1970s,” says Porter in the trailer of her documentary, Light Wins, that touches on everything from gay-straight alliances in schools to Duck Dynasty and features former Arkansas Gov. Mike Huckabee and Iowa Rep. Steve King. In November, Porter released the trailer for her new movie, What’s a Girl to Do?, a semi-autobiographical rom-com about how she helped pass the federal ban on some later-term abortions.

Despite her success with the heartbeat bill, some anti-abortion groups in Ohio, as well as the prominent National Right to Life Committee, oppose heartbeat measures because they clearly contradict Roe v. Wade and will likely get struck down in court. Last year, Porter told Mother Jones she wasn’t fazed by opposition from her side: “There are ten things that God carved into stone, and one of them was not, ‘Thou shalt be erudite about not killing babies.”