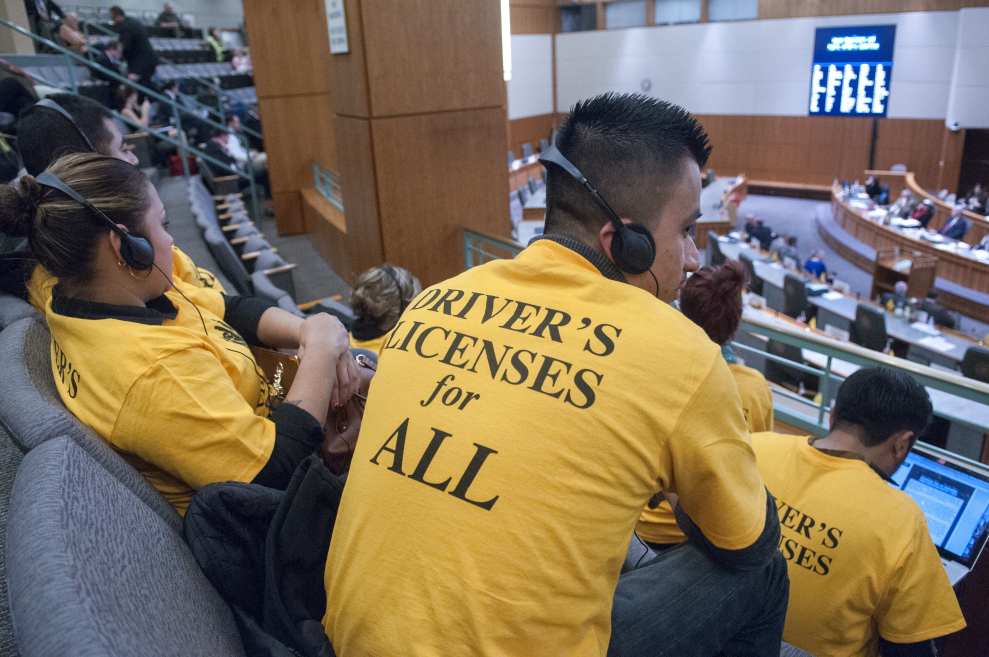 Since 2015, California has issued about 800,000 licenses to drivers who lack proof of legal residence. In Illinois, more than 212,000 people have received what are known as temporary visitor driver’s licenses. Connecticut has approved around 26,000 drive-only licenses for undocumented immigrants, and nine more states plus the District of Columbia have similar programs.

To date, these initiatives have been widely hailed as a reasonable way to try to improve public safety, by helping make sure that everyone behind the wheel was a competent driver. But now, with the incoming Trump administration seemingly committed to deporting undocumented individuals, there is worry among immigration advocates that the identifying data collected as part of these programs—names, addresses, copies of foreign passports—could be used by federal authorities looking to send people back to their home countries.

Last month, Trump said he would deport or incarcerate as many as 3 million undocumented immigrants who have criminal records. A 10-point immigration plan on Trump’s transition website lists “zero tolerance for criminal aliens,” along with a promise to “ensure that other countries take their people back when we order them deported.” The plan also calls for blocking funding for so-called “sanctuary cities” that historically have limited their cooperation with federal immigration agents.

“The discussion up to this point has been hypothetical or theoretical, and now it’s feeling very real,” said Jonathan Blazer, advocacy and policy counsel for the ACLU. “People start to think, ‘Are things going to look completely different than they’ve ever looked before, in terms of what the federal government might try to do?'”

“People start to think, ‘Are things going to look completely different than they’ve ever looked before, in terms of what the federal government might try to do?'”

Nothing in federal law specifically entitles immigration agents access to state data on drivers who may be in the country illegally, according to Blazer. To get states to produce a list of these drivers, US Immigration and Customs Enforcement—which includes the federal government’s deportation arm—might have to rely on its administrative subpoena power. Even then, states could refuse to provide the information, thereby forcing the federal government to sue for the driver data or narrow its request, Blazer and other legal experts said.

“If ICE just came and said, ‘Hey, give me all your driving privilege card holders, ‘I would say, ‘No,’ and they would have to take some sort of different legal action that is beyond my control,” said Scott Vien, the director of Delaware’s Division of Motor Vehicles, which has so far issued about 3,500 driving credentials to undocumented immigrants. Some of the records they maintain include copies of birth certificates, foreign passports and consular identification cards.

Uncertainty already surrounds the fate of more than 700,000 undocumented immigrants who first arrived in the United States as children, and who obtained temporary reprieves from deportation through a 2012 executive action of President Barack Obama. In applying to the program, these individuals submitted all sorts of personal information to the federal government, including home addresses and the names of family members. Immigrants and their advocates now fear that this information could be turned over to federal immigration officials after Obama leaves office, for use in tracking down undocumented individuals.

Driving records, it is now clear, constitute another vast store of data on US residents who may not be residing in the country legally. In all, more than 1 million licenses meant for people without proof of legal immigration status have been issued across the country.

There have already been some instances of ICE seeking to get and use driver’s license information in bulk from states that do not have the special programs for the undocumented—New Jersey among them. In 2012, ICE’s Newark field office obtained from the New Jersey Motor Vehicle Commission a list of people who had applied for restricted licenses using valid but temporary immigration documents. An initial review “resulted in the identification of numerous foreign-born individuals who fall under ICE priorities,” according to an April 2012 letter from the field office director, who also requested that New Jersey continue to supply updated lists.

That same year, the Atlanta field office proposed gaining access to the names of foreign-born residents with temporary driver’s licenses, as well as lists of rejected license applications, as part of its efforts to achieve that year’s “criminal-alien removal target.” That DMV project was not implemented, according to an ICE official’s email from 2014, which was obtained through a Freedom of Information Act request by the National Immigration Law Center.

The Illinois secretary of state’s office has said it cannot guarantee the safety of temporary license applicants’ information from federal immigration authorities. If the office receives a “legally valid request” for information on license applicants who lack proof of legal residence, it will comply, according to an FAQ published by the state earlier this year.

“If ICE did come to us with a subpoena, we’d probably have to go and get a legal opinion, from the attorney general,” said Dave Druker, a spokesman for the Illinois secretary of state’s office. “It hasn’t happened yet.”

“If ICE did come to us with a subpoena, we’d probably have to go and get a legal opinion, from the attorney general,” said Dave Druker, a spokesman for the Illinois secretary of state’s office. “It hasn’t happened yet.”

The state has had a problem with protecting applicant information before. About three years ago, an employee of the secretary of state’s office alerted ICE about an undocumented immigrant who had applied for a temporary license. The applicant was then apprehended upon showing up at a state office for an appointment in February 2014. Due in part to outcry from immigrant rights advocates following the incident, the state has said it will no longer proactively volunteer information to ICE about temporary license seekers, as long as they do not have any records of felony criminal activity or appear on any terrorism watch list.

“In order to find out the legality, someone needs to be willing to sue, and because of data sharing and how it operates, a lot of times it’s going to require a political actor to do that—a state, a locality,” said Mark Fleming, the national litigation coordinator for the National Immigrant Justice Center. “That’s often a political decision for a lot of elected officials.”

In California, any driver’s license information that the state makes available to law enforcement agencies through data-sharing systems does not indicate whether the driver provided evidence of legal immigration status, according to Artemio Armenta, a spokesman for the California Department of Motor Vehicles.

In the Illinois system, however, there’s a potential giveaway: Driver data for a regular license includes a Social Security number, whereas temporary license records will list a consular card or foreign passport number instead.

Other states that offer driving privileges to undocumented individuals include Colorado, Connecticut, Delaware, Hawaii, Maryland, New Mexico, Nevada, Utah, and Vermont. In Washington state, no resident has to provide evidence of legal presence or citizenship to obtain a standard license. Even so, many immigrants who lack proof of legal residence face a dilemma in deciding whether or not to take advantage of these programs and apply for driving credentials.

“People can’t be afraid to get the license that would enable them to learn the rules of the road and hold them accountable for driving,” said Tanya Broder, a senior staff attorney with the National Immigration Law Center. At the same time, “we’ve told people that if they’re at high risk, if they don’t want to be seen or found, that the DMV database makes them easier to find.”