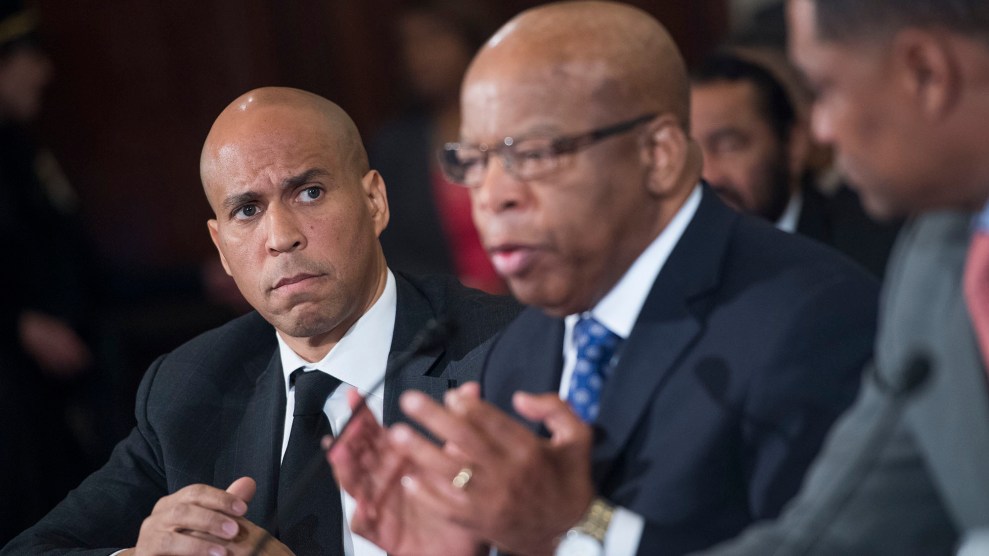 For a man dogged by allegations of racist comments and actions, Sen. Jeff Sessions (R-Ala.) managed to make it through the first day and a half of confirmation hearings to be the next attorney general without many fireworks. That changed on Wednesday afternoon, when three of Sessions’ African American colleagues in Congress testified against him.

Sen. Cory Booker (D-N.J.); Rep. John Lewis (D-Ga.), a civil rights icon who nearly died fighting for African American voting rights; and Rep. Cedric Richmond (D-La.), the chairman of the Congressional Black Caucus, all gave testimony in opposition to Sessions. They told the Senate Judiciary Committee that Sessions’ record on everything from voting rights to mass incarceration made him unfit for the office of attorney general.

It is customary for members of Congress to testify first in congressional hearings, but committee chairman Chuck Grassley (R-Iowa) scheduled the three members for the end of the hearings. That discrepancy was not lost on the three testifying members. “To have a senator, a House member, and a living civil rights legend testify at the end of all of this is the equivalent of being made to go to the back of the bus,” said Richmond, to a smattering of applause.

Booker spoke first of the three, saying that although senators typically support one another, he found that tradition pitted against “what my conscience tells me is best for my country.” In his remarks, Booker said Sessions’ record shows he will not adequately protect the rights of minorities. “Sen. Sessions has not demonstrated a commitment to a central requirement of the job: to aggressively pursue the congressional mandate of civil rights, equal rights, and justice for all,” Booker said, according to prepared remarks. “In fact, at numerous times in his career, he has demonstrated a hostility toward these convictions, and has worked to frustrate attempts to advance these ideals.”

Lewis invoked his fight for voting rights in Alabama, where he endured a near-fatal beating on the Edmund Pettus Bridge in Selma. He described Alabama’s evolution from a segregated place where he and Sessions both grew up under Jim Crow to ground zero of the successful fight for voting rights. He wondered whether Sessions’ repeated calls for “law and order” today mean what they did before the civil rights movement, when that language represented a regime of segregation and oppression.

“The forces of law and order in Alabama were so strong that to take a stance against this injustice we had to be willing to sacrifice our lives,” Lewis said. When civil rights activists sacrificed themselves physically in Alabama—sometimes with their lives—President Lyndon Johnson and Congress responded by passing the Voting Rights Act of 1965, he noted. “We made progress, but we are not there yet,” he said. “There are forces that would take us back to another place.”

He added, “We need someone who will stand up, speak up, and speak out for the people that need help.”

The most pointed language came from Richmond. He spoke directly about the choice facing the senators, and particularly the Republican members who appear to have no reservations about confirming Sessions. “Simply put, Sen. Sessions has advanced an agenda that would do great harm to African American citizens and communities,” he said.

Richmond offered a warning to the senators. “If you vote to confirm Sen. Sessions, you take ownership of everything he may do or not do,” he said. “Each and every senator who casts a vote to confirm Sen. Sessions will be permanently marked as a co-conspirator in an effort to move this country backward, toward a darker period in our shared history. So I ask you all, where do you stand?”

The testimony from these three members of Congress was interspersed with input from two pro-Sessions witnesses, both black attorneys who have worked with Sessions. But Booker, Lewis, and Richmond made it clear to the Senate Judiciary Committee that a vote for Sessions is one that virtually every black member of Congress opposes.