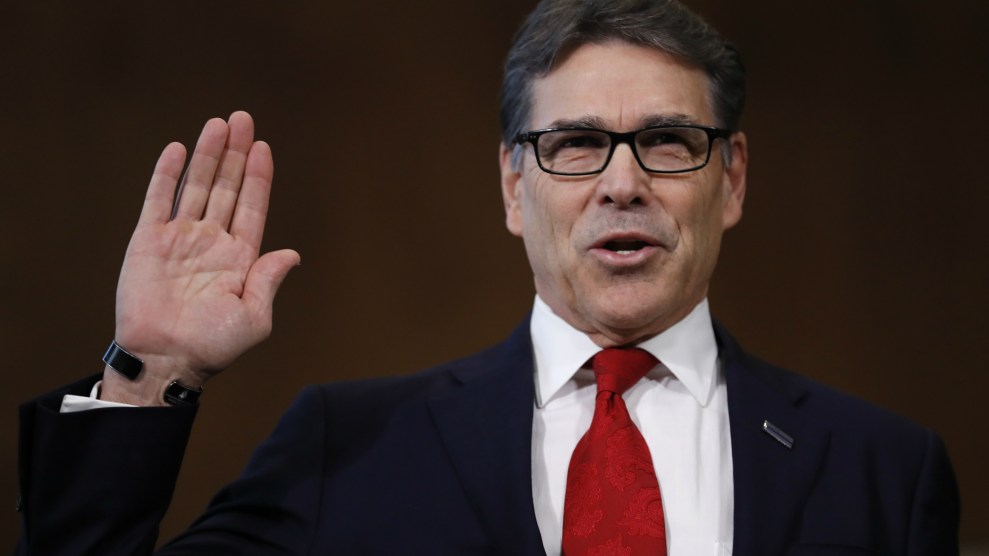 In recent decades, the federal government has turned to private corporations to help handle everything from intelligence to prisons. Should nuclear waste be next?

That’s a question currently being considered by the Department of Energy, as it looks for solutions to the long-standing problem of how to store radioactive waste from nuclear power plants. Now, with Rick Perry slated to head the department, the issue could become more complicated. That’s because the former Texas governor has deep ties to a waste disposal company that could create a significant conflict of interest once he becomes energy secretary.

“Lo and behold, the company that lobbied to get the legislation passed and gave lots of political contributions was the only applicant, so it was a real corporate sweetheart deal.”

Nuclear waste is currently held at power plants across the country—some of which are no longer operating. The federal government was supposed to start consolidating the waste from these plants nearly 20 years ago, but it hasn’t been able to find a way to dispose of it. In 1987, the feds determined that a site at Yucca Mountain in Nevada would be the perfect dumpster for high-level nuclear waste (such as used reactor fuel), but opposition to the plan began almost immediately. Finally, in 2010, the Obama administration cut funding for Yucca Mountain in response to local opposition and the efforts of Nevada Sen. Harry Reid, who was the Senate majority leader at the time. With the new administration taking over and Reid retiring, it’s unclear whether the project will be revived.

Because Yucca Mountain had been stalled for so long, the federal government began to explore the possibility of working with private companies for interim storage of the waste—a temporary solution that could last for decades. Testifying at a Senate hearing in September 2016, Obama administration Energy Secretary Ernest Moniz explained this “novel approach” could help the government follow through on its obligation to collect the nuclear waste, and his department began to ask private companies for information about how it would work.

During his confirmation hearing on Thursday, Perry emphasized that obligation remains a pressing concern. “Hopefully this is the beginning of seeing real movement, real management of an issue that I think no longer can sit and be used as a political football, one that must be addressed,” he said. “And I think we can find a solution both in the interim and in the long term.”

One company eager to get in on interim storage is Texas-based Waste Control Specialists, which last year applied for a license with the Nuclear Regulatory Commission and will be submitting a preliminary proposal to the Department of Energy before the end of the month to store high-level nuclear waste for the federal government. In order to get a contract with the Department of Energy and store the waste, the company would need to obtain a license from the NRC. (The two agencies are independent from each other.) An NRC spokesperson said the license approval process would take a minimum of three years.

Watchdogs worry the company’s ties to Perry could create a conflict of interest. As Mother Jones previously reported, WCS lobbied the Texas Legislature for six years to pass legislation that would allow private companies in the state to be responsible for the disposal of low-level nuclear waste. (Low-level waste consists of things like clothing, cleaning supplies, and other items exposed to radiation.) The legislation passed in 2003, and Perry signed it.

When the new system went into effect, WCS was the only company that applied for a state license to handle the waste. A panel of state engineers and geologists determined in 2007 that groundwater contamination at WCS’ proposed disposal site in West Texas was “highly likely.” WCS countered that such contamination wasn’t possible. “The state of Texas required over 600 test wells at a variety of depths to address questions about any possibility of subsurface water before issuing the license,” WCS spokesman Chuck McDonald said. “Those questions were answered emphatically.”

Despite the reviewers’ concerns, the three Perry-appointed members on the Texas Commission on Environmental Quality signed off on the license. Three staffers at the agency resigned in protest over the decision. “We knew from the beginning that this permit was intended to be issued,” Glenn Lewis, a member of the review panel, said in a 2011 interview with NPR.

Many opponents of the plan cried foul, pointing to the relationship between Perry and Harold Simmons, the company’s owner at the time. Simmons, who has since died, was one of Perry’s biggest contributors throughout his career, giving his campaigns more than $1.3 million. When the Texas governor ran for the 2012 GOP presidential nomination, Simmons was one of his largest donors. (Simmons also helped fund the Swift Boat Veterans for Truth campaign against John Kerry in 2004.) Critics of Texas’ deal with WCS, such as the Lone Star Chapter of the Sierra Club, have suggested that Simmons’ relationship with Perry may have helped WCS get the permits.

“Lo and behold, the company that lobbied to get the legislation passed and gave lots of political contributions was the only applicant, so it was a real corporate sweetheart deal,” Cyrus Reed of the Texas Sierra Club said.

McDonald denies that the company received any special treatment. According to McDonald, WCS invested more than $500 million to license and construct the facility in West Texas and won’t be able to recoup that investment for decades. He calls the facility “the most environmentally studied and geologically surveyed site on the planet.”

“WCS went through the most rigorous licensing requirements ever imposed on a disposal facility of any kind,” McDonald said.

“With radioactive waste, you really want to make sure the person watching the waste is more permanent than companies are.”

According to Reed, the staffers on the Texas Commission of Environmental Quality who resigned were concerned about more than just water contamination. “We had a couple people resign or retire from the commission and come to us and say, ‘Look, we think there was political pressure to get this license done, and all the t’s weren’t crossed,'” he said, adding that Simmons’ past contributions to Perry raised red flags. “Harold Simmons certainly was supportive of the governor who then signed into law important bills for his industry,” he said.

In an interview with Mother Jones, a Perry spokesman declined to answer questions about the WCS license process but said Perry has no ties to the company beyond Simmons’ campaign contributions.

Reed’s group sued WCS over its disposal facility due to the environmental concerns, but the Texas Supreme Court ultimately decided the group didn’t have standing in the case.

More recently, Perry has supported the idea of storing more dangerous nuclear waste in Texas. In 2014, he sent a letter to the Texas lieutenant governor and the speaker of the house, in which he declared that “it’s time for Texas to act” because states holding onto high-level radioactive waste have “been betrayed by their federal government.” Attached to the letter was a report that Perry had commissioned from the Texas Commission of Environmental Quality calling on the federal government to authorize “centralized interim storage facilities” for high-level nuclear waste. It also outlined how the Department of Energy could work with private companies to make that a reality.

As for WCS, the company argues that disposing of Texas’ low-level nuclear waste for more than four years has made it a strong candidate to handle the federal government’s waste, especially since so few companies are in this line of work. There would likely be little competition for the potential contract. Companies generally notify the NRC well in advance if they intend to apply for a license, and only one other company has issued such a notice.

“Texas leadership from the governor on down has had experience addressing nuclear waste issues, and it’s an experience that very few other states have had because no other state has successfully opened a low-level radioactive waste disposal facility,” McDonald said. “I think the fact that Governor Perry has working knowledge of the issue…will serve him well as the secretary of energy.”

Even if Yucca Mountain eventually does move forward, permanent disposal is at least 20 years away, and interim storage would still be necessary, argues WCS.

Meanwhile, a coalition of anti-nuclear-energy groups has lined up against the creation of new interim storage sites and has written a letter to NRC opposing the company’s application. Attorney Robert Eye, who represents some of the groups, worries these sites will become permanent places to put the waste because there will be “very little pressure to move [it] to a permanent repository, even with the best intentions.”

Reed, the Texas Sierra Club official, says his primary concern is that if something goes wrong and waste isn’t properly stored, the government could ultimately end up dealing with an expensive cleanup.

“Private companies…can easily go belly-up depending on short-term economic realities,” Reed said. “With radioactive waste, you really want to make sure the person watching the waste is more permanent than companies are. The real concern is companies walk away from things, and then other people are left holding the bag.”