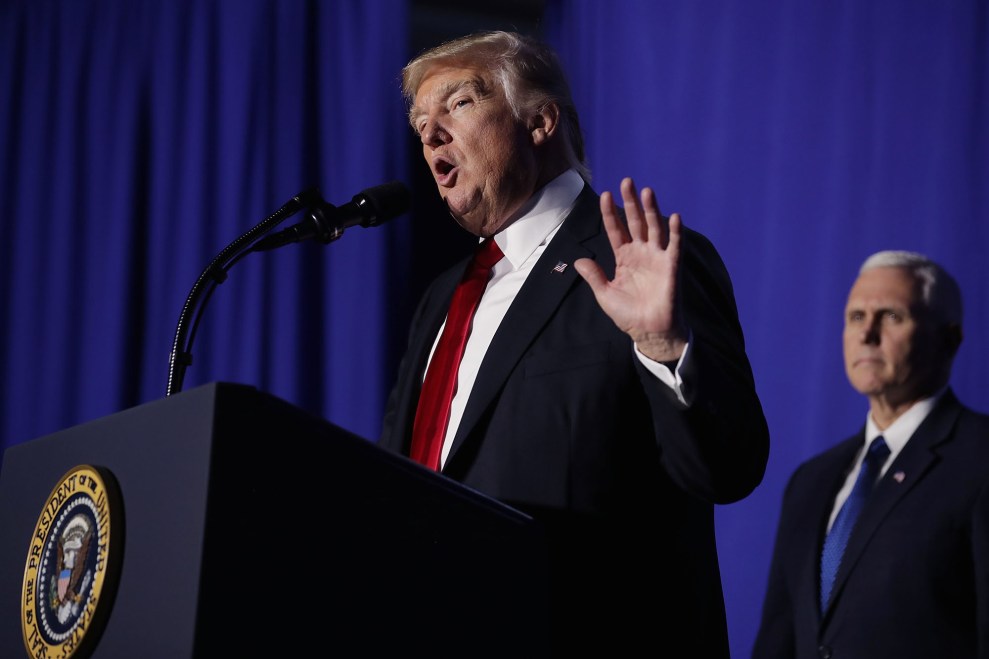 Friday marks the end of President Donald Trump’s first week in office. In just that short time, the new commander in chief and his administration have managed to produce an extraordinary amount of alarm in the United States and abroad. Concerns have ranged from a series of executive actions and efforts to gag federal agencies to Trump’s penchant for promoting bewildering falsehoods and his obsession with his own popularity. It’s been a lot to take in, so here’s a brief run-down of just some of what’s happened over the last week:

Friday, Obamacare Repeal: In one of his first moves as president, Trump fulfilled one of his campaign’s biggest promises to begin steps to dismantle the Affordable Care Act. A replacement plan, however, has yet to be revealed. Republican leaders are reportedly scrambling to introduce one by the spring.

Saturday, First of Several Leaks: Despite Trump’s push to silence his critics and control messaging, there have been a number of leaks coming from within his inner circle. Some fascinating details include confirmation he was infuriated by social-media posts about his disappointing inauguration numbers, aides worried about Trump’s constant television watching, and reports he “blindsided” his own CIA director and defense secretary about an executive order draft to use torture practices again.

China Escalation: In his first official press briefing on Monday, Spicer said Trump was considering ways to “protect our interests” in the South China Sea. The comments sparked alarm in China, where its government asserts it has an “irrefutable” claim to territorial islands. “The United States is not a party to the South China Sea dispute,” a spokeswoman for the Chinese Foreign Ministry said.

During a closed-door meeting with congressional leaders on Monday, Trump resurrected the widely debunked claim that he lost the popular vote because millions of undocumented immigrants illegally voted for Hillary Clinton. The next day, Spicer confirmed that the president still believed in the unsubstantiated claim that voter fraud cost him the popular vote. On Wednesday, Trump took his claim to both Twitter and national television, threatening he may launch a “major” investigation into the falsehood.

I will be asking for a major investigation into VOTER FRAUD, including those registered to vote in two states, those who are illegal and….

Tuesday, Pipelines Return: Among his flurry of executive actions this week, Trump signed orders to revive the construction of both the Dakota Access and Keystone XL pipelines. The Obama administration had previously halted the controversial projects because of environmental concerns and mounting protests.

Environmental Protection Agency Freeze: Trump’s administration ordered a temporary freeze on all EPA grants and contracts. All EPA studies must now also be reviewed by members of the Trump administration, many of whom are well-known climate change deniers, before they go public.

Wednesday, Border Wall: In another executive order signed on Wednesday, Trump called for the immediate construction of a massive border wall to be built along the US-Mexico border. The move, along with Trump’s continued demand that Mexico pay for the project, prompted President Enrique Peña Nieto to cancel a meeting at the White House on Thursday.

Refugees and Immigration: It was also reported on Wednesday that Trump is expected to sign several pieces of executive orders halting immigration from certain countries that include Iraq, Iran, Libya, and Yemen. The administration is also likely to place a ban on refugees from resettling to the United States.

United Nations Funding: According to a New York Times report published on Wednesday, Trump is expected to sign orders dramatically reducing US funding to several international organizations, most notably the United Nations. The move would be consistent with his campaign’s assertion that the United States pays an exorbitant amount for its role in global organizations without much in return. Trump has also accused the United Nations of not being an ally to Israel.

Thursday, Relocating US Embassy to Jerusalem: As reports swirl of Trump’s serious intentions to move the US embassy from Tel Aviv to Jerusalem, the Palestine Liberation Organization on Thursday vowed to revoke its recognition of Israel if the president follows through on his controversial campaign promise.