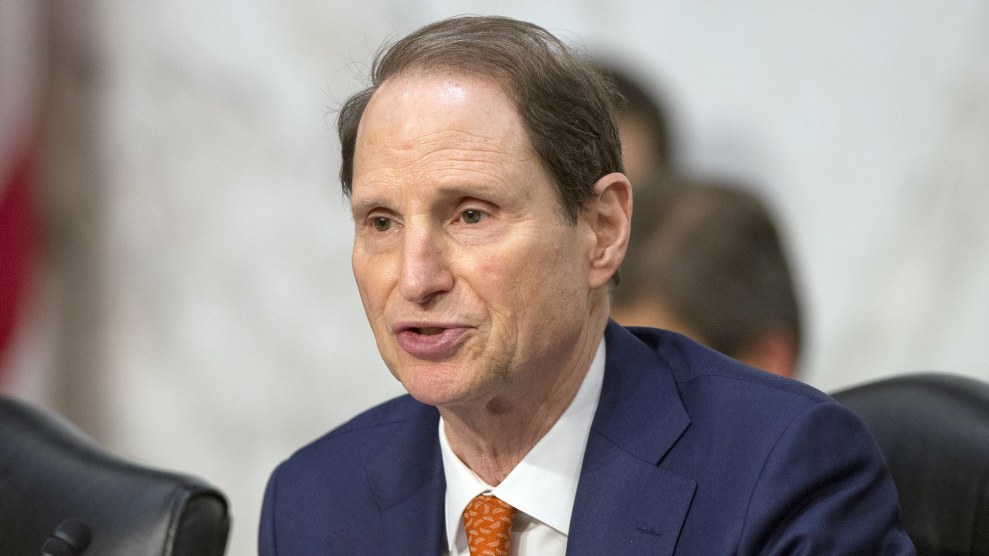 It was only a couple of questions in the middle of a hearing, but the queries posed to FBI Director James Comey by Sen. Ron Wyden (D-Ore.) during a Senate Intelligence Committee gathering on Tuesday afternoon had potentially explosive implications, because they suggested that Wyden believes the FBI has been sitting on information regarding ties between Donald Trump’s inner circle and Russia.

The hearing was focused on the intelligence community’s recently released report concluding that Vladimir Putin’s regime had mounted an extensive secret operation to influence the US election in order to help Trump. At the start of the hearing, outgoing Director of National Intelligence James Clapper emphasized that the report did not assess whether the Russian meddling had affected the outcome of the election. This was an indirect rebuke to Trump and his partisans, who have repeatedly said the report concluded the Russian intervention did not affect the results. Comey also noted that Russian hackers had targeted Republican targets but that the FBI had not found evidence that Moscow had penetrated the Trump campaign or current accounts of the Republican National Committee.

The most dramatic exchange came with Wyden’s questions. He noted that several media outlets have reported that Trump campaign associates, including Paul Manafort, Trump’s former campaign chairman, had maintained connections with Russians tied to Putin. He asked Comey, “Has the FBI investigated these reported relationships?” Comey answered, “I would never comment on investigations…in an open forum.”

Wyden pushed Comey further. He asked whether the FBI chief would declassify information related to this matter and “release it to the American people” by January 20. No, Comey said, adding, “I can’t talk about it.”

Wyden then declared, “The American people have a right to know this.” He continued: “If it doesn’t happen by January 20, I’m not sure it’s going to happen.”

Wyden’s line of questioning indicated that he believes (or knows) the FBI has collected information on Trump ties to Moscow. And Wyden is in a position to know. As a member of the committee, he can see classified material gathered by the FBI and other national security agencies. With these questions to Comey, Wyden was seemingly referring to specific information. In fact, on November 30, he led all the Democratic members in sending a short letter to President Barack Obama that stated, “We believe there is additional information concerning the Russian Government and the U.S. election that should be declassified and released to the public. We are conveying specifics through classified channels.” The letter gave no hint of the nature of this information.

But it is not hard to read between the lines: Intelligence committee members have received classified briefings that included information regarding contacts between the Trump camp and Russians.

In September, Yahoo News reported that US intelligence agencies were probing the contacts between Russian officials and Carter Page, who was identified by the Trump campaign as one of its foreign policy advisers. The New York Times reported in November that the FBI was looking at Manafort’s business ties to Ukrainians who were Putin allies. The newspaper noted, “In classified sessions in August and September, intelligence officials also briefed congressional leaders on the possibility of financial ties between Russians and people connected to Mr. Trump.”

Wyden also apparently fears that once Trump takes over the executive branch, this information—and perhaps any ongoing investigations—would be suppressed.

Shortly after Wyden questioned Comey, Sen. Angus King (I-Maine) asked the FBI director if he would say whether any investigations on Trump and Russia were underway. “We never confirm or deny a pending investigation,” Comey replied. King shot back: “The irony of you making that statement I cannot avoid.” This was a clear reference to Comey’s public declarations during the presidential campaign about the FBI investigation of Hillary Clinton’s handling of email at the State Department. Comey responded, “We sometimes think differently about closed investigations.”

So what specifically prompted Wyden to press Comey at the hearing? The American public may never know.