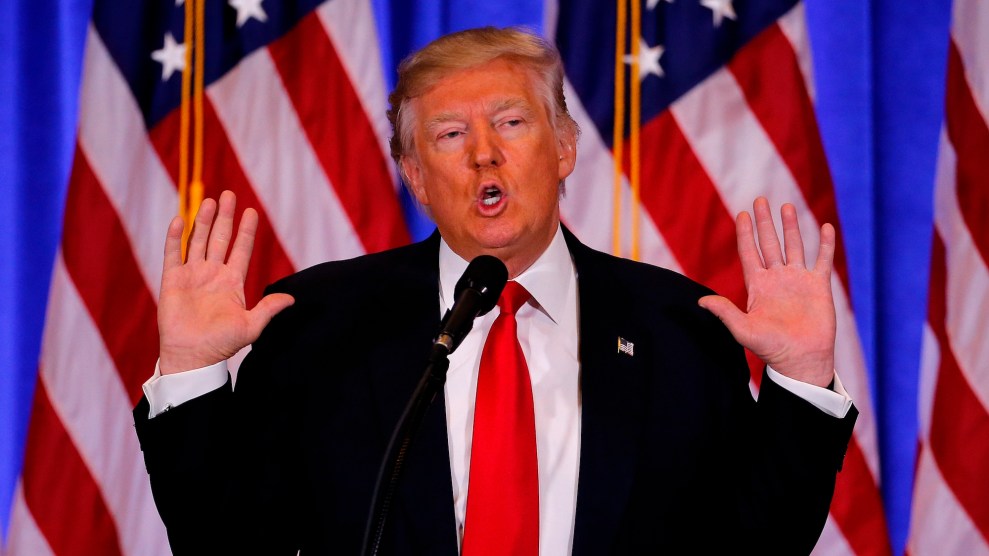 Walter Shaub, the head of the Office of Government Ethics, blasted President-elect Donald Trump’s new plan to handle his conflicts of interest on Wednesday. Trump laid out a plan earlier in the day to put his assets in a trust that his adult children control, with Trump receiving little information about the operations of the family business. At an event at the Brookings Institution in Washington, DC, Shaub said Trump’s plan is not sufficient. “Nothing short of divestiture will resolve these conflicts,” he said. “This has been my position from the start.”

Shaub noted that the arrangement Trump unveiled at a Wednesday press conference should not be compared to a blind trust, which is overseen by an independent trustee who works to sell off assets and reduce conflicts. “This is not a blind trust,” Shaub remarked. “It’s not even close. It’s not even halfway blind. The only thing it has in common with a blind trust is the label ‘trust.'”

Shaub noted the pile of envelopes Trump had laid out next to the podium during his press event. Trump said each contained a legal agreement separating himself from one of his businesses. The sheer volume of these agreements, Shaub said, underscores the problem. Despite Trump’s proposed arrangement—which was presented at the press conference by a Washington tax lawyer named Sheri Dillon—Shaub suggested it was inevitable that some of these deals would end up posing conflicts.

He acknowledged the president and vice president are exempt from the conflict-of-interest rules that apply to all other federal employees, but he maintained that conflicts can still arise. He pointed out that having a president who voluntarily complies with the rules would set a positive tone and provide the OGE with an ally in enforcing ethics rules throughout the executive branch. Shaub cited a memo on presidents and conflicts of interest written by the late Supreme Court Justice Antonin Scalia that concluded that if presidents do not deal with their financial conflicts, they open themselves up to “damaging criticism.”

“The sheer obviousness of Scalia’s words become apparent if you just ask yourself one question: Should the president hold himself to a lower standard than his own appointees?” Shaub said.

Shaub said Trump and his team did not consult him or the OGE while developing the plan. He challenged Dillon’s assertion that it would be too expensive and too complicated for Trump to divest all his assets. “I wish she had spoken to those of us in government who do this for a living,” he said, pointing to all the other elected officials and federal employees who are forced to divest. Other federal officials have been unhappy about divesting, Shaub said, but “their basic patriotism usually prevails as they set aside their personal interests.”