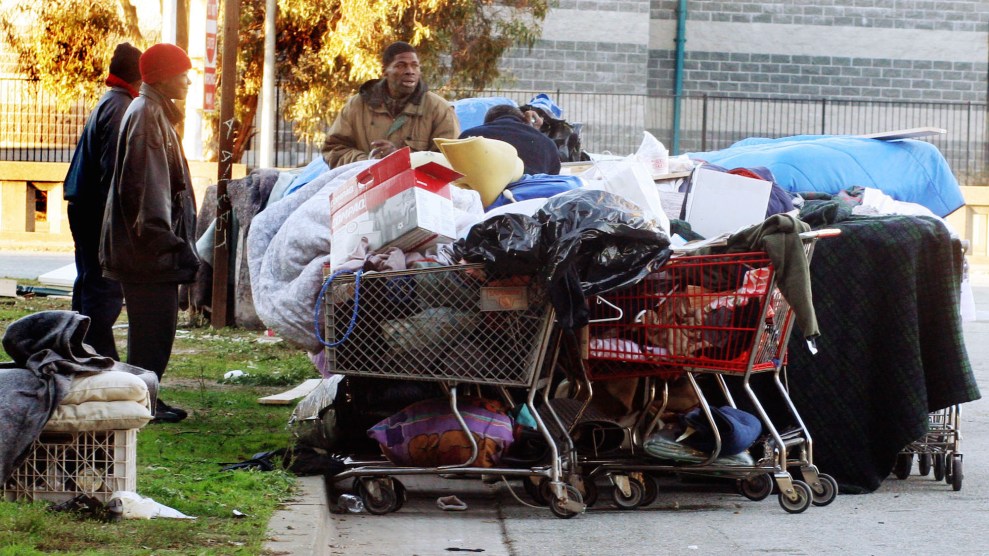 An encampment near the MacArthur Freeway in West OaklandLaura A. Oda/ZUMA

It’s cleaning time at one of the several encampments set up in the shadow of the elevated MacArthur Freeway in West Oakland, California. More than two dozen tents in various states of repair sit in the musty space beneath the stark overpass. Axel, a black man in his late 40s who lives along the camp’s outskirts, pushes a broom across the sidewalk that serves as a front porch for his tarp-draped tent. After a few minutes of sweeping, the trash he has arranged into a neat pile is collected by Abby Harrison, who places it into one of the five shiny Waste Management trash cans circulating in the camp. In a little while, the cans will be arranged on the street bordering the camp’s southern edge, where they will wait to be emptied by a garbage truck.

The cleanup continues by the camp’s two portable toilets, where a man is gathering used toiletries for disposal and clearing the path for a pumper truck to back in. The truck arrives a few minutes ahead of schedule, and the driver hops out to quickly clean and service the porta-potties. The driver is gone after a few minutes of pumping and wiping, much to the relief of another man patiently waiting to use the facilities.

In many respects, this homeless encampment is like hundreds of other camps that have mushroomed in cities across America, especially in the West. But what distinguishes the camp beneath the 580 freeway is that rather than being targeted for removal, it’s receiving public services from the city of Oakland. Instead of razing the encampment, Oakland and Alameda County policymakers set up a pilot program that offers basic services to some unsheltered residents. This includes not just waste pickup and porta-potties, but a mobile health clinic and the placement of large concrete barriers to protect the camp from traffic. Oakland has also directed its social services and relief employees to work with the residents of the MacArthur Freeway camp to help them find permanent housing. Since the pilot started in October, city officials report that 17 of the camp’s 42 original residents have moved into stable living situations. 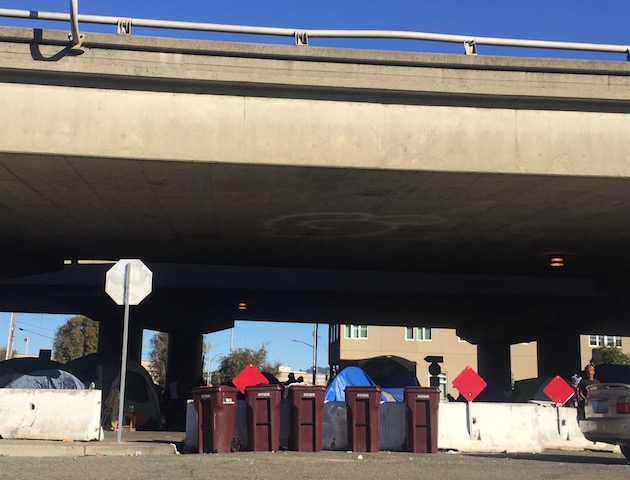 Garbage cans sit by an encampment beneath the MacArthur Freeway in Oakland. Matt Tinoco

This approach is unique, especially as many cities double down on anti-camping laws and controversial “sweeps,” often conducted under the guise of protecting public health. The process is familiar: Homeless people set up a camp, bringing with it trash, human waste, and sometimes crime. Neighbors complain, and before long the local government serves the camp’s residents with a notice to vacate. The camp is cleared, but it either moves or returns after a few weeks.

San Francisco’s municipal authorities cleared out a large camp of 250 people from beneath one of the city’s freeways earlier this year. In November, the city’s voters passed Proposition Q, which prohibits assembling a tent on a public sidewalk. As Supervisor David Campos explained in a September statement, “encampments are not a solution to homelessness. They are unhealthy for homeless people, and they are unhealthy for residents and businesses around them.” Yet homelessness advocates note that clearing out camps is often little more than a cosmetic solution.

Like Oakland, other cities have experimented with an approach that moves away from simply removing homeless people. Though sweeps still occur in Seattle, the city has set up a partnership with religious organizations that allows some homeless people to live on the organizations’ property. (Nevertheless, a 2015 motion that would have authorized city services like waste pickup at encampments died after Seattle residents objected.) Santa Barbara, California, has a “safe parking” program that allows people who live in vehicles to park in public lots without threat of citation.

The Oakland pilot project is based on the understanding that if unsheltered residents have, at the very least, a reliable and sanitary place to pitch their tents, they can devote more time and energy to finding a more stable place to live. “Breaking camps apart takes them farther away from permanent housing,” says Alex Marqusee, a legislative analyst for City Council President Lynette Gibson McElhaney, the chief sponsor of the project in Oakland. “It’s opposite of the direction we want to go.”

“It’s like, where am I going to go?'” says Harrison, a black woman in her early 40s who lives under the MacArthur Freeway. “When I have to move, it messes everything up. I get them people up in their nice houses not wanting to see any of this. I don’t want to see this. But I need to live, and it’s not like I want to live here.”