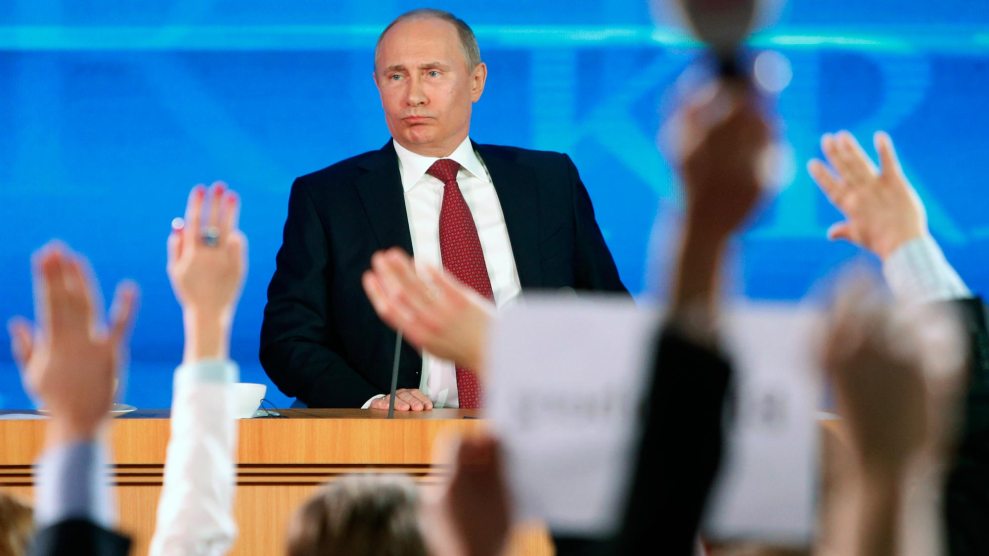 During Donald Trump’s first press conference as president-elect, he called BuzzFeed a “failing pile of garbage,” shouted down questions from a CNN reporter, and evaded tough questions about the dossier released the day before alleging that Russia had been cultivating Trump for years and had assembled compromising material on him. In the United States, many found Trump’s harsh approach shocking. “It is our observation,” said Fox News anchor Shepard Smith, referring to Trump’s treatment of CNN, “that neither they nor any other journalists should be subjected to belittling and delegitimizing by the president-elect.”

But for some Russians, Trump’s bombastic style at the press conference, his animosity toward journalists, and his rambling nonanswers seemed all too familiar.

“Well, now the U.S. also has a president who never answers a direct question and is rude to journalists,” tweeted opposition activist Tikhon Dzyadko.

Others joked about what would have come next for the disobedient journalists, were they in Putin’s Russia:

“So I guess now Trump will close BuzzFeed and replace the head editor of CNN,” one user tweeted, alluding to the 2013 episode in which Putin unexpectedly shuttered RIA Novosti, a Kremlin-owned but somewhat independent news agency, restructured it as Rossiya Segodnya (“Russia Today,” no relation to the English-language RT), and replaced its top editor with Dmitry Kiselyov, a pro-Putin TV commentator known for extreme anti-gay comments, in what Russian media viewed as another example of the president’s tightening grip over the country’s media sector.

After the press conference, Russian journalist Alexey Kovalev, speaking from his own experience, published a letter to the US press on Medium about what to expect from Trump’s behavior toward journalists:

Congratulations, US media! You’ve just covered your first press conference of an authoritarian leader with a massive ego and a deep disdain for your trade and everything you hold dear. We, in Russia, have been doing it for 12 years now—?with a short hiatus when our leader wasn’t technically our leader?—?so quite a few things during Donald Trump’s press conference rang my bells.

One additional point of comparison: The leaders’ disrespect for facts. “You can’t hurt this man with facts or reason. He’ll always outmaneuver you,” writes Kovalev. “He always comes with a bag of meaningless factoids (Putin likes to drown questions he doesn’t like in dull, unverifiable stats, figures and percentages), platitudes, false moral equivalences and straight, undiluted bullshit.”

Some Russians went a step further, spoofing what the conference would have looked like if some Putinlike idiosyncrasies had been applied. At Putin’s press conferences, journalists are allowed to bring signs, often hinting at the subjects of their questions (“Education,” “the Arctic,” and “Gratitude for the Russian People” are actual signs in the photo below) to attract the leader’s attention. One Twitter user edited a photo from Putin’s December 2016 press conference, adding only a swoop of orange hair and the caption, “The first press conference of US President-elect Donald Trump.” (Hat tip for these tweets to the Moscow Times.)

Other users wondered in jest why American journalists’ questions were so serious—a far cry from the softball queries that have become mainstays of the Russian leader’s press conferences:

“What sort of a press conference is this, after which no one got a new apartment, and an American girl wasn’t gifted a cute puppy?” wrote this user, alluding to times Putin has created pseudo news events by doling out goodies to constituents.

“Why isn’t anyone asking Trump about the roads? I was in Arizona yesterday, there are definitely a couple of potholes.”

“American journalism is dead, insofar as no one is asking Trump where he’ll be spending New Years and what he’ll be serving at his table.”