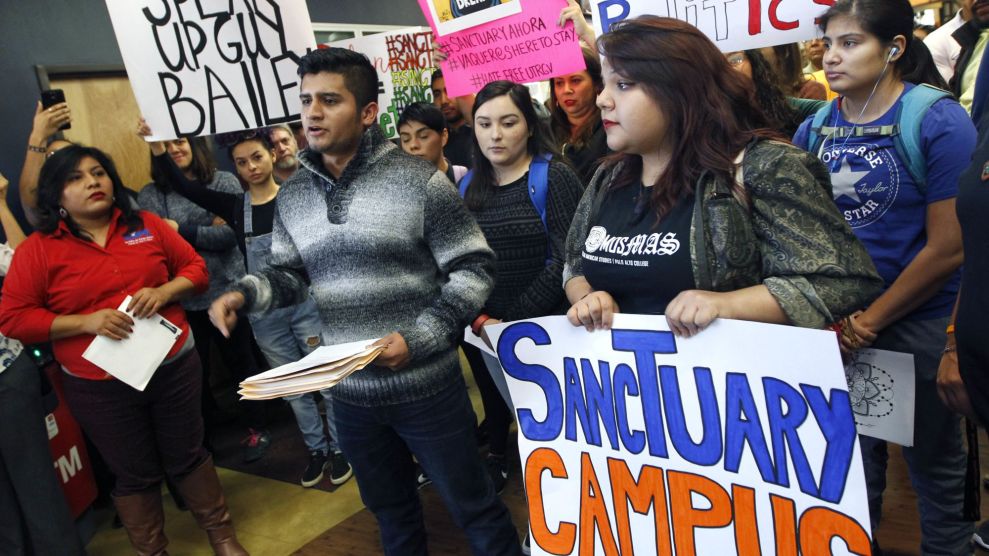 Students at the University of Texas-Rio Grande Valley call for the school to adopt sanctuary campus policies. Nathan Lambrecht/The Monitor via AP

Shortly after Donald Trump won the presidential election, a number of colleges and universities declared themselves “sanctuary campuses” for students, faculty, and staff who may face the threat of deportation under the new administration. The University of Pennsylvania, Trump’s alma mater, said it would not allow US Immigration and Customs Enforcement (ICE) agents onto campus without a warrant, nor would it share private student information unless required. And in late November, the University of California announced a similar set of policies aimed at protecting undocumented students across the entire UC system.

Some universities, however have held back on making those sorts of announcements. Harvard University President Drew Faust, for example, defended the university’s decision to not declare itself a sanctuary campus by saying it might endanger students rather than protect them, and the university did not want to offer “false and misleading assurance” to students. Other schools have argued that sanctuary policies may put them at risk of losing federal funding. (Some state officials have already threatened to cut funding for universities declaring sanctuary status.)

So how much do sanctuary campus policies actually help students? Here are a few things to keep in mind.

By declaring themselves sanctuaries, schools aren’t necessarily invoking any kind of law or protection. As the American Council on Education notes, sanctuary doesn’t involve a legal status that is protected or recognized under federal law.

Schools have defined their sanctuary policies in different ways, too: New York University’s sanctuary campus declaration, for instance, included nine bullet points outlining already existing policies around financial aid and nondiscrimination, as well as an announcement that it would launch a campus “climate survey” to take stock of people’s academic and working experiences on campus. Swarthmore College, a liberal arts college in Pennsylvania, noted it would not participate or enroll in “E-Verify,” a federal program used for screening an immigrant’s immigration status, and that it would not make campus housing decisions based on immigration status. The announcements have shared common themes so far, however, such as reaffirming the school’s commitment to undocumented students and other vulnerable populations, or refusing to release private information—in many cases restating policies that already were in place.

There are already federal laws in place that protect student information.

Most universities that have declared themselves sanctuaries say they will not turn over student information to ICE—and that’s likely because doing so would conflict with student privacy laws. The Family Educational Rights and Privacy Act (FERPA), for instance, prohibits schools from releasing a student’s personal information without the student’s (or a parent’s) consent. The Health Insurance Portability and Accountability Act (HIPPA) similarly prevents student medical records from being released without valid consent.

However, there are limits: Under FERPA, schools must release records without consent in some cases, such as under a subpoena, and information like addresses and phone numbers can be published in school directories without students specifically opting out.

ICE has a long-standing policy to not attempt raids or arrests at certain “sensitive” locations, such as schools, churches, or public gatherings, including at marches or rallies. Though there has been some concern that the Trump administration could reverse or even revoke those policies, immigration advocates say that the policies have been in place for so long that changing them would be extremely difficult.

If ICE officers were to come onto campus, however, things get unclear. Some universities, such as Wesleyan, have said they will not voluntarily assist ICE officers with deportation measures. The University of California’s statement says police officers at its 10 campuses will not help conduct ICE investigations based upon a student’s legal status or comply with requests to detain students, unless required by law or if the student has been convicted of a felony. But campus authority only goes so far: Brown University, for instance, said in a statement to the Washington Post that “based on consultation with legal counsel, we understand that private universities and colleges do not have legal protection from entry by members of law enforcement or Immigration and Customs Enforcement.” The University of Wisconsin-Madison told Inside Higher Ed that the city’s police department had full authority to enforce laws on campus without permission from the university.

But schools can still take steps to ensure that sanctuary policies protect students.

The National Immigration Law Center, along with several immigration advocacy organizations, recently issued a model resolution for how K-12 schools and universities can protect undocumented students, faculty, and staff. Beyond making sanctuary declarations, schools should consider laying out specific, school-wide policies—and making sure that all campus staff and police are trained and aware of them, said the NILC’s Jessica Hanson. The NILC recommends, for instance, that all campus personnel receive training on how to handle information requests from ICE officers and to prohibit them from using campus facilities for immigration enforcement.

Hansen also stressed that schools can help by offering more resources to support undocumented students, such as helping fund legal resources or mental-health services—something students have called for in numerous petitions. Advocates also say the public message still matters: By publicly declaring themselves sanctuary campuses, universities can reaffirm their commitment to students. “It says to students that we support you, we affirm your identity,” said Meng So, the director of UC-Berkeley’s Undocumented Student Program. “I think schools are going to be safe havens that communities seek to find themselves in. Students need to hear and understand that their top leaders care about them.”