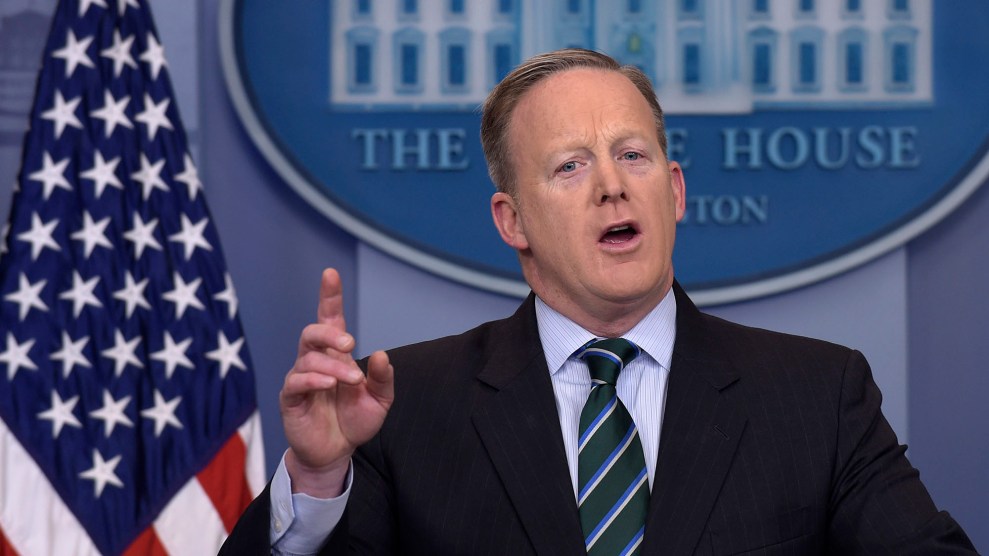 Hours after President Donald Trump tweeted that he’d launch a “major investigation” into massive voter fraud, of which there’s no evidence, White House Press Secretary Sean Spicer on Wednesday laid out a few details of what such an investigation might look like.

As reporters and experts immediately pointed out, Trump’s belief that 3 million to 5 million people voted illegally in November is at odds with what his own lawyers said in court when they challenged the recount petitions of Green Party presidential candidate Jill Stein. “All available evidence suggests that the 2016 general election was not tainted by fraud or mistake,” Trump’s legal team argued in a brief.

But on Wednesday, Spicer claimed that the legal team had actually only been discussing the three states where Stein pushed for recounts, not the entire country. “I think there’s a lot of states that we didn’t compete in where that’s not necessarily the case,” he said, mentioning California and New York. “I think that if you look at where a lot of potential—a lot of these issues could have occurred in bigger states. That’s where I think we’re going to look.”

Spicer says there could be potential voter fraud examined in “a lot of states that we didn’t compete in… bigger states” – mentions CA and NY pic.twitter.com/GFGjRKKmjQ

Spicer also floated the idea that voter ID laws, which serve to suppress voter participation among minorities, young people, and the elderly, could be a solution to problems the investigation may find.

Spicer’s comments led reporters and other observers to question why a massive voter fraud scheme would be carried out in reliably blue states, instead of swing states where the election is decided.

Must have been a weird Soros meeting.

“Should we do the fraud in swing states?”

It’s not just Trump’s legal team that sees no evidence of fraud. Secretaries of state, governors, and even Republican members of Congress have come forward to say they have no evidence to back up Trump’s allegations. On Tuesday, Sen. Lindsey Graham (R-S.C.) warned that Trump’s voter fraud claims will “erode his ability to govern this country if he does not stop it” and urged him to “knock this off.”

If Wednesday is any indication, Trump is not taking Graham’s advice.