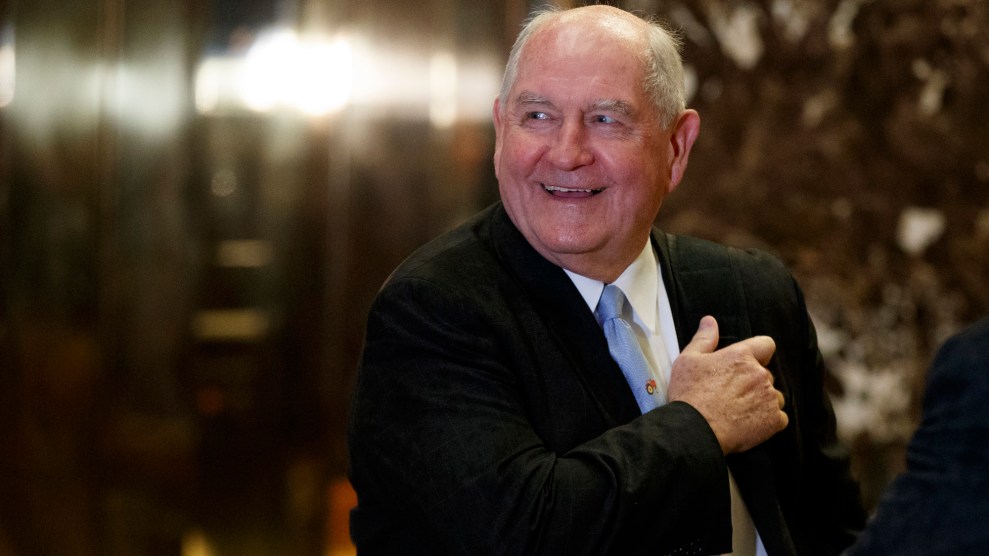 Amid the pomp and tumult of inauguration week, you may have missed that President (whoa) Donald Trump at last made his final Cabinet pick, naming former Georgia Gov. Sonny Perdue US Department of Agriculture secretary. At a televised candlelight dinner on the eve of the inauguration, Trump mused on his long and zigzagging USDA search that started and ended with Perdue, who emerged as a front-runner right after the election and then faded as the president-elect auditioned a succession of candidates for the post (transcript by Politico):

He came into my office two months ago. Since then, I saw 10 people that everybody liked, politically correct, and I kept thinking back to Sonny Perdue, a great, great farmer. He loves to farm; he knows everything about farming, knows everything about agriculture. He’s been successful in farming. He knows the good stuff from the bad stuff.

But people came into my office, and they said, ‘I am really wanting the job.’ I said, ‘Let me ask you a question: Do you have any experience with farms or agriculture?’ ‘No sir, I don’t.’ I said, ‘Have you ever seen a farm?’ The one gentleman, who is a great guy, we’ll find something else. But I can’t make him the secretary of agriculture.

The “politically correct” bit is, no doubt, a reference to the fact that Trump’s 22-member cabinet and top staff is largely, like Perdue, white and male: It contains just four women, one African American, and not a single Latino. Indeed, Trump will be the first president since Ronald Reagan to enter office without having appointed a Latino to a cabinet-level post. (Reagan appointed a Latino to his Cabinet in his second term.)

During the USDA search, there were intermittent reports that Trump was, as Politico put it at one point, “scrambling to appoint a Hispanic official to serve in his Cabinet amid criticism that his incoming administration lacks diversity at the highest levels.” He publicly mulled several candidates who would have added diversity (examples: Abel Maldonado, son of farm workers and, unlike Perdue, a farmer himself; J.C. Watts; Heidi Heitkamp).

In the end, Trump chose a white, southern male for the job. And not just any white southerner. Here are a few things to know about Perdue:

1. He was a big fan of the Confederacy. As I reported a few weeks ago, Perdue displayed a disturbing nostalgia for the Confederacy while governor (2003-2011)—not a great look for the incoming head of a federal department that, in 1999, settled a landmark lawsuit charging systemic USDA discrimination against black farmers between 1983 and 1997, agreeing to pay out $1.25 billion to harmed farmers.

2. He enacted severe voter ID laws. Voter fraud is vanishingly rare, and laws requiring photo identification at polling places target black voters with “almost surgical precision,” a federal court ruled last year. In 2005, Perdue signed into law one of the nation’s first “strict” ID laws—the very first of many in former Confederate states—requiring people to either present a current photo identification card or be denied the vote. Perdue vigorously defended it through several legal challenges. It remains in place.

3. He championed immigration crackdowns. In 2006, then-Gov. Perdue mashed up the voter-fraud myth with another racially tinged fantasy, this one fervently held by Perdue’s new boss, Trump: that undocumented immigrants burden taxpayers by siphoning welfare benefits. “It is simply unacceptable for people to sneak into this country illegally on Thursday, obtain a government-issued ID on Friday, head for the welfare office on Monday and cast a vote on Tuesday,” he declared. He backed up his harsh words with a crackdown on undocumented workers. Coupled with the George W. Bush administration’s simultaneous get-tough efforts, the Georgia law worked perhaps too well. Here’s an Associated Press piece from September 2006:

STILLMORE, Ga. –  Trailer parks lie abandoned. The poultry plant is scrambling to replace more than half its workforce. Business has dried up at stores where Mexican laborers once lined up to buy food, beer and cigarettes just weeks ago.

This Georgia community of about 1,000 people has become little more than a ghost town since Sept. 1, when federal agents began rounding up illegal immigrants.

The sweep has had the unintended effect of underscoring just how vital the illegal immigrants were to the local economy.

Perdue doubled down in 2009, signing another tough immigration bill. By 2010, when preparing to leave office, he had changed his tune a bit—perhaps chastened by how much Georgia’s ag industry relies on migrant labor. He declined to express an opinion about the renewed immigration crackdown being promoted by his successor, but he did tell the Associated Press that “the Republican Party needs to be very, very careful that it maintains the golden rule in its rhetoric regarding immigration policy.” He added that the GOP need to make sure that “people of color and people who are not US-born” are made to feel welcome, adding, “And I think that’s the challenge of the Republican Party.”

4. He’s tightly intertwined with the industry he will now regulate. Before entering politics, Perdue sold fertilizer. As governor of Georgia, he led the nation’s number-one chicken-producing state, and over his career in politics he netted $328,328 in donations from agribusiness interests, including $21,000 from Gold Kist, a large, Georgia-based chicken-processing company that was later taken over by chicken giant Pilgrim’s Pride. He now runs a company that trades agricultural commodities globally.

5. He enjoyed the spoils of cronyism. Back in 2005, Georgia state Rep. Larry O’Neal—Perdue’s lawyer—managed to pass what the Atlanta Journal-Constitution called a “seemingly mundane tax bill” that was “designed to allow Georgians to delay paying state taxes on land they sell in Georgia if they buy similar property in another state.” The bill included a “a last-minute change, which would make the tax break retroactive to land sales made in 2004.” Voila. “And just like that, Gov. Sonny Perdue saved an estimated $100,000 in state taxes,” the AJC reported, adding this:

Without the backdated tax break, the governor would have had to pay taxes on money he made in 2004 by selling property he owned in Georgia. Later that year, he used $2 million in proceeds from the sale of that Georgia land to buy 19.51 acres near Florida’s Walt Disney World.”

Then there was the time in 2010, at the tail end of his second term as governor, when Sonny Perdue named his cousin, David Perdue, Jr., to the board of the Georgia Ports Authority. According to the AJC, it was a plum post for David, who had just stepped down as chief executive of Dollar General discount stores:

The board sets policy and oversees management of the quasi-state agency that rakes in some $67 billion in revenue statewide. And it’s viewed as a prestigious panel, where powerful Georgia business and political leaders rub shoulders. The chairman while [David] Perdue served on the board was Alec Poitevint, former head of the state Republican Party who went on to manage the 2012 GOP national convention.

Meanwhile, that same year, Sonny Perdue “while he was still governor, met with ports officials to discuss opportunities for his private grain and trucking businesses at the port once he left office,” the AJC reports, citing emails it obtained through the state’s Open Records Act. Then, in 2011, after Sonny Perdue left office, he and David Perdue launched Perdue Partners—”a global trading company that facilitates US commerce focusing on the export of US goods and services through trading, partnerships, consulting services, and strategic acquisitions.” The paper adds:

Records obtained by the Atlanta Journal-Constitution through an open records request paint an even more complicated portrait, showing that a trucking company purchased by both Perdues hauled cargo at the port while David was on the board making important decisions about the port’s operation.

With his stint on the port authority board on his resume, David Perdue leapt into Georgia politics—in 2014, he was elected to the US Senate.