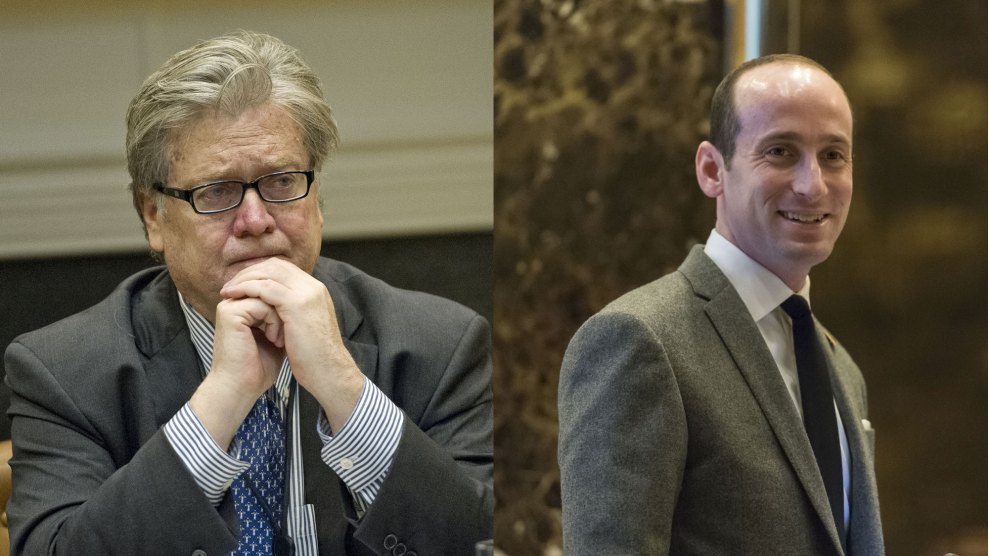 The Trump administration has insisted since Sunday that the president’s executive order banning travel to the United States from seven predominately Islamic countries “is not a Muslim ban.” But as Mother Jones first reported in a series of investigations starting last summer, the two top Trump advisers who reportedly crafted the immigration crackdown—Stephen Bannon and Stephen Miller—have a long history of promoting Islamophobia, courting anti-Muslim extremists, and boosting white nationalists.

For nearly a year before stepping down as the CEO of Breitbart News to lead the Trump campaign, Bannon hosted a SiriusXM radio show, Breitbart News Daily, where he conducted dozens of interviews with leading anti-Muslim extremists. Steeped in unfounded claims and conspiracy theories, the interviews paint a dark and paranoid picture of America’s 3.3 million Muslims and the world’s second-largest faith. Bannon often bookended the exchanges with full-throated praise for his guests, describing them as “top experts” and urging his listeners to click on their websites and support them.

Another frequent guest was Pamela Geller, the president of Stop Islamization of America, whom Bannon described as “one of the top world experts on radical Islam and Sharia law and Islamic supremacism.” Geller told Bannon that George W. Bush’s description of Islam as a “religion of peace” was something “we all deplore,” that there had been an “infiltration” of the Obama administration by radical Muslims, and that former Central Intelligence Director John Brennan may have secretly converted to Islam. Bannon never pushed back against any of those unfounded claims.

In other exchanges on the show, Bannon described the Council on American-Islamic Relations (CAIR), a group that defends the rights of Muslims, as “a bunch of spin” and “a bunch of lies.” He accused the mainstream media of “basically going along the lines of being Sharia-compliant on blasphemy laws.” He warned of “Sharia courts taking over Texas” and said that he opened a Breitbart News bureau in London in order to combat “all these Sharia courts [that] were starting under British law.”

Bannon has lauded Miller, who previously worked for Sen. Jeff Sessions. “Whether the issue was trade or immigration or radical Islam, for many years before Donald Trump came on the scene, Sen. Sessions was the leader of the movement and Stephen was his right-hand man,” Bannon told Politico in June.

As a member of the Duke Conservative Union, Miller worked closely with Richard Spencer, a Ph.D. student who would later coin the term “alt-right” and become a leading white nationalist.

Miller has long been an advocate of framing the fight against terrorism in religious terms. In 2007, while an undergraduate at Duke University, he started the Terrorism Awareness Project, an effort to make “students aware of the Islamic jihad and the terrorist threat, and to mobilize support for the defense of America and the civilization of the West.” The group promoted “Islamo-Fascism Awareness Week” on college campuses and took out ads in college newspapers titled, “What Americans Need to Know About Jihad.” After many papers declined to run the ads, Miller appeared on Fox & Friends to discuss the controversy, saying, “How are we going to win a war on terror if we can’t even talk about the enemy?”

As a member of the Duke Conservative Union, Miller worked closely with Richard Spencer, a Ph.D. student who would later coin the term “alt-right” and become a leading white nationalist. Spencer told me that at Duke, Miller helped him with fundraising and promotion for an on-campus debate on immigration policy that Spencer organized in 2007, featuring influential white nationalist Peter Brimelow. Miller vehemently denied to me that he had any connection to Spencer or his ideas, but another former member of the Duke Conservative Union confirmed to me that Miller and Spencer worked together on the Brimelow event. And at DCU meetings, according to another past member of the group, Miller denounced multiculturalism and expressed concerns that immigrants from non-European countries were not assimilating.

Last July, Bannon boasted to Mother Jones during the Republican National Convention that Breitbart News was “the platform for the alt-right.” The site regularly publishes anti-Muslim content; since Sunday, Breitbart has defended the new Trump policy crafted by its old boss, including with a piece headlined “Terror-Tied Group CAIR Causing Chaos, Promoting Protests & Lawsuits as Trump Protects Nation.”