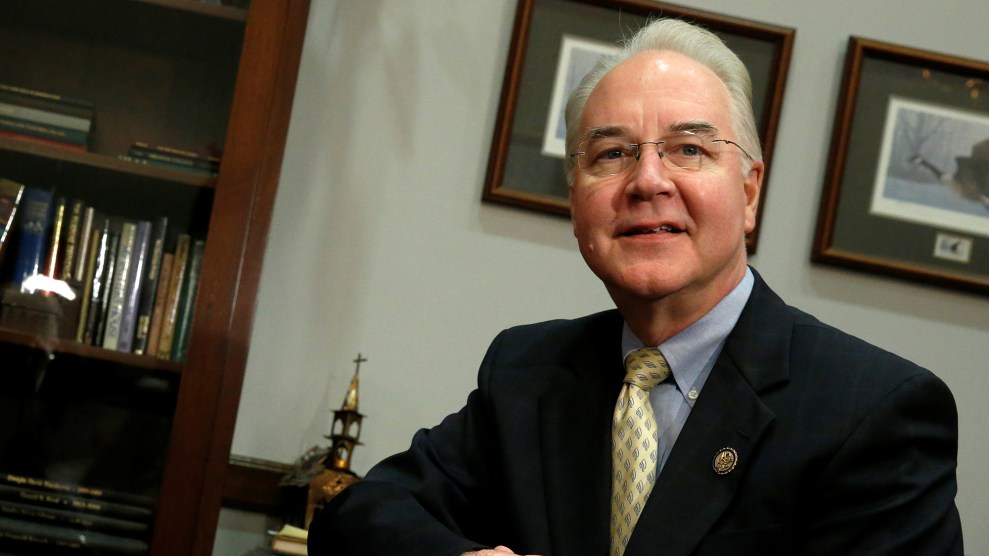 When Donald Trump’s nominee to oversee the country’s health care system appears before the Senate on Wednesday morning, he can expect to face a barrage of questions not only about Republican plans to replace Obamacare, but also about whether he broke the law by profiting off health stocks.

Rep. Tom Price (R-Ga.), Trump’s nominee for secretary of health and human services, is scheduled to testify Wednesday before the Senate Committee on Health, Education, Labor, and Pensions, before he later visits the Senate Finance Committee, which will vote on his confirmation. An orthopedic surgeon who has made it his political mission to reduce regulation of the medical industry, Price has led Republican attacks on President Barack Obama’s health care law, the Affordable Care Act. He’s one of the few members of Congress to lay out a detailed alternative, although his proposal has not been adopted by the president he hopes to work for. But Price’s ability to get confirmed in the Senate might depend less on policy than on a string of alleged ethical lapses that have come to light since his nomination was announced in November.

All of this portends a confrontational hearing and a less-than-warm reception from Senate Democrats. Here are the controversies that are most likely to emerge in the hearing.

Republicans have stumbled toward a repeal of the Affordable Care Act since the new Congress convened at the beginning of the month. Both chambers have passed resolutions to preclude a Democratic filibuster of a repeal, but Republicans are still struggling to figure out what will take Obamacare’s place if they eradicate the law.

Price has introduced the same Affordable Care Act replacement bill in each session of Congress since the law was enacted in 2009. But Price’s plan would likely strip many poor people of insurance by ending the Affordable Care Act’s expansion of Medicaid coverage to millions of low-income Americans. Price would also change the formula for determining who gets government subsidies for private insurance so that it doesn’t take income into account—meaning far more of the tax benefits would go to the wealthy than under the current system.

Is Price’s plan Trump’s plan? No one knows. Over the weekend, Trump said his plan to replace Obamacare would offer “insurance for everybody”—something Price’s plan does not seem to do. CNN reported that Price has been excluded from the Trump team’s deliberations on health care reform so that he can avoid answering questions about those plans in his Senate hearing.

Still, Price will have to offer some sort of vision for how the Trump White House will address the health system—and just promising to repeal Obamacare won’t be enough. On Tuesday, the Congressional Budget Office released a report finding that the number of people without insurance would increase by 18 million under the first year of a repeal, with that number expanding to 32 million by 2026. Premiums for individually purchased insurance would also double beyond current projections over the next decade.

Price has been the subject of ethics concerns since Trump announced his nomination. The Wall Street Journal reported in December that Price has made more than $300,000 in trades in health care stocks over the past four years, while he continued to introduce health care legislation. Democrats called foul, with one House member writing a letter to federal financial regulators requesting an investigation into whether Price’s trading broke the law. Senate Minority Leader Chuck Schumer has pushed the Office of Congressional Ethics to examine whether Price’s stock trades violated laws prohibiting members of Congress from profiting off nonpublic knowledge.

Over the weekend, CNN reported that Price had bought between $1,001 and $15,000 in stock in a medical device company right before he introduced a bill that would have directly helped the company. On Tuesday, Schumer said that stock purchase “could very well be a violation of the law.”

Price is a staunch opponent of abortion rights. He has voted several times for a federal 20-week abortion ban, which stands in contrast to Trump’s pledge to send the abortion debate “back to the states” when his Supreme Court picks try to overturn Roe v. Wade. But abortion isn’t the only area where Price has fought against reproductive rights. Mother Jones reported in December on the myriad ways Price has tried to restrict contraception, including defunding Planned Parenthood, gutting Obamacare’s mandate that employer-sponsored insurance plans cover contraception without a copay, and passing “personhood” bills that would make certain IUDs and the morning-after pill illegal.

In addition to expanding insurance coverage, the Affordable Care Act changed the way doctors and hospitals are compensated in order to slow the growth rate of health spending. Throughout his career, Price has complained that the government burdens doctors with too many regulations and attacked proposals that would pay doctors for results rather than for each test ordered or procedure performed. Although he can’t repeal Obamacare’s insurance expansion without congressional action, he can reverse many of the law’s medical payment reforms, since these policies are largely at the discretion of the secretary of health and human services. Even as the American Medical Association has lavished praise on Price’s nomination, a faction of doctors has rejected the AMA’s endorsement and called for more scrutiny into Price’s attacks on the Obamacare reforms.