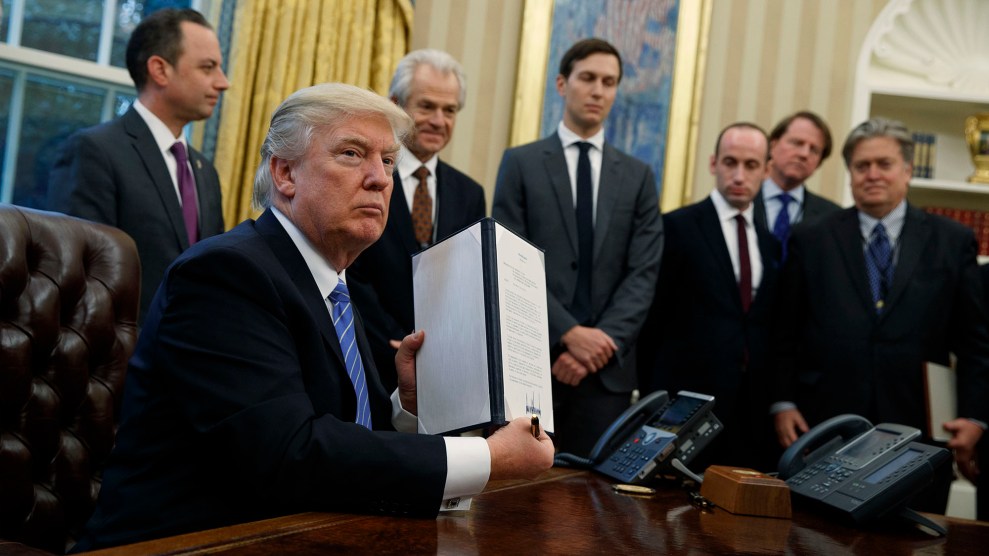 Surrounded by men, President Donald Trump signed an executive order Monday reinstating the “global gag rule,” which bans federal funding for international non-governmental organizations that offer abortions or advocate for the right to an abortion.

The Ronald Reagan-era order, also known as the Mexico City policy, has been instituted by Republican presidents, and then killed by Democratic presidents, since its inception. Obama signed an executive order early in his presidency to reverse it.

According to the Center for Reproductive Rights, women in poor countries suffer the most from this policy. A 2003 analysis found that the rule leads to unsafe abortions, which are the second-leading cause of death for women of reproductive age in Ethiopia and account for more than 40 percent of the maternal mortality rate in Kenya. Peru has one of the highest maternal mortality rates in Latin America, in part because of its high rate of clandestine abortions.

The 1973 Helms Amendment already bans the use of American foreign aid for abortions. Money from the United States can go to organizations that educate women about abortions or perform abortions, as long as it’s not used for the procedure itself. The gag rule would deny US funding to any international organization that mentions abortion as an option for women seeking help with an unwanted pregnancy—even if that organization largely provides contraception or more general reproductive health care.

The United States currently spends about $600 million annually on family planning and reproductive health programs in foreign countries. The Guttmacher Institute, a think tank that studies reproductive health care, estimates that a loss of this funding would translate to 38,000 more abortions. Marie Stopes International, one of USAID’s biggest family planning partners, estimates that the global gag rule will lead to an additional 2.2 million abortions worldwide.

The international assistance funding provides access to contraceptive services and supplies for 27 million women and couples.

In a statement, Sen. Jeanne Shaheen (D-N.H.) promised to introduce a bill to repeal the rule on Tuesday. “The Trump Administration and Republican leadership have made no secret of their dangerous obsession with rolling back reproductive rights,” she said. “President Trump’s reinstatement of the Global Gag Rule ignores decades of research, instead favoring ideological politics over women and families.”