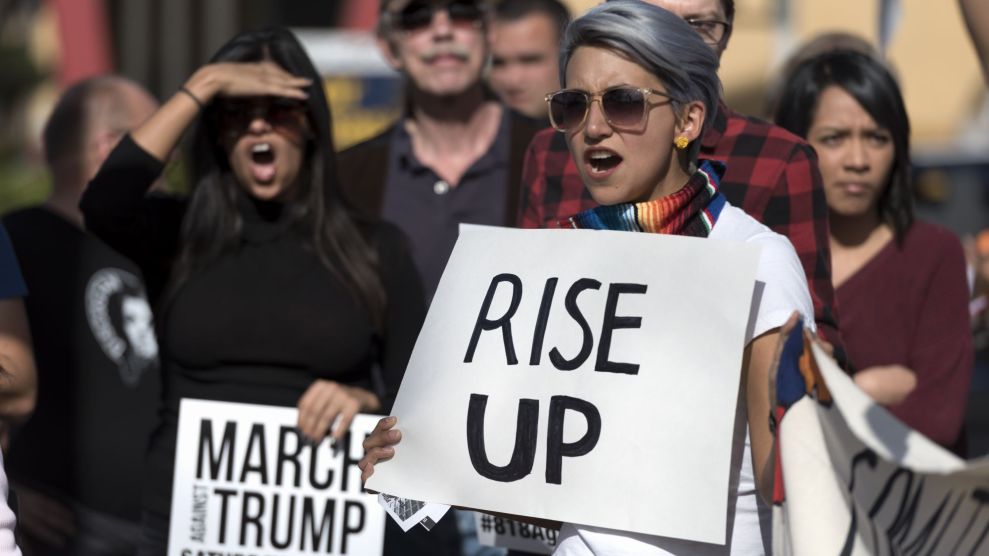 On January 20, president-elect Donald Trump will be inaugurated into office. The swearing-in ceremony will begin at 11:30 a.m. followed by several celebrations, including galas and inaugural balls, throughout the weekend.

But if Trump’s critics have anything to do with it, the inauguration won’t entirely be festive: Dozens of groups have announced rallies and protests leading up to the historic event, including the Women’s March on Washington, which is expected to draw as many as 200,000 attendees. Washington, DC officials say they’re preparing for at least a million visitors to the city for the inauguration and protests. And it’s not just the capital that’s bracing for January 20. Hundreds of cities expect local rallies to take place.

These are some of the major events that have already taken place, as well as ones that are planned. Follow our live coverage of highlights from the inauguration protests here.

January 14: March for Immigrants and Refugees

Part of the We Are Here to Stay campaign, immigrant and refugee rights groups organized to show solidarity for immigrants and other vulnerable communities and to stand up against hateful rhetoric against immigrants. The grassroots campaign, led by United We Dream, a youth-led immigrant justice group, urged local groups to start their own chapters to protest Trump’s immigration proposals. Events took place in numerous cities, including Tucson, Albuquerque, Chicago, and Houston.

January 14: We Shall Not Be Moved March on Washington

Reverend Al Sharpton’s National Action Network held a march on Washington to call for Trump to continue protecting civil rights. “Protecting the civil rights of citizens and the voting rights of people that have been excluded, providing health care for all Americans and equal opportunity should supersede any of the beltway partisan fights that we are inevitably headed into,” said the group.

Led by Senator Bernie Sanders (D-Vt.), Democratic members of Congress and other health care groups protested the potential repeal of the Affordable Care Act with rallies across the country. House leader Nancy Pelosi (D-Calif.) held an event in San Francisco, Sen. Kamala Harris (D-Calif.) was in Los Angeles, and Senators Elizabeth Warren (D-Mass.) and Ed Markey (D-Mass.), along with Mayor Marty Walsh, led a rally in Boston, Massachusetts. Sanders made headlines recently when he brought a giant banner of a Trump tweet to Congress (Trump tweeted last May that he would not make cuts to social security, Medicare, and Medicaid) and drew thousands to his own event in Warren, Michigan.

Launched by poet Erin Belieu, Writer’s Resist calls itself a national network of writers “driven to defend the ideals of a free, just and compassionate democratic society.” The group asked writers to independently organize local events where writers read from historic and contemporary texts on democracy and free expression. More than 75 events were planned, including in Seattle, Portland, Omaha, London and Hong Kong, according to its website. The flagship event was held in New York City, where writers gathered at the steps of the New York Public Library for readings, performances, and a pledge to defend the First Amendment.

Several teachers unions and education groups, including the American Federation of Teachers and the National Education Association, have organized under a newly-formed group called the National Alliance to Reclaim Our Schools. They plan to stage a national day of action to “defend” schools from Donald Trump and his calls to dismantle the public education system. Educators have called Trump and his secretary of education pick, Betsy DeVos, an “existential threat to public schools.”

Described as an alternative to anti-Trump protests, the Busboys and Poets Peace Ball will be a “gathering to celebrate the accomplishments and successes of the past four years” at the new National Museum of African American History and Culture in Washington, D.C. Notable attendees include celebrities, authors, and organizers such as Solange, Alice Walker, Amy Goodman and Alicia Garza. The event had room for more than 3,000 people and has already sold out, founder Andy Shallal told ThinkProgress.

The Act Now to Stop War and End Racism (ANSWER) Coalition secured a permit to stage a “mass protest” against Donald Trump, starting at 7 a.m. at DC’s Freedom Plaza. Other groups holding marches include the Occupy Movement, the Democratic Socialists of America, and #DisruptJ20, a group which says it wants to shut down the inauguration.

Separately, the DCMJ, a lobbying group focused on marijuana legislation, says it will distribute free joints to celebrate pot legalization in D.C.

College students across the country are planning campus walkouts, organized by groups including Socialist Students and Students for a Democratic Society.

The Women’s March on Washington, which started as a Facebook page after the election, will be by far one of the biggest events after the inauguration. The march’s organizers say up to 200,000 people could attend, and the event has drawn such enthusiasm and support that additional Facebook pages have been set up for parents who are bringing their children, as well as a “MarchBnb” website for people in need of housing.

Other marches inspired by the Women’s March are also being held in other cities in the US and worldwide. A full list can be found here.