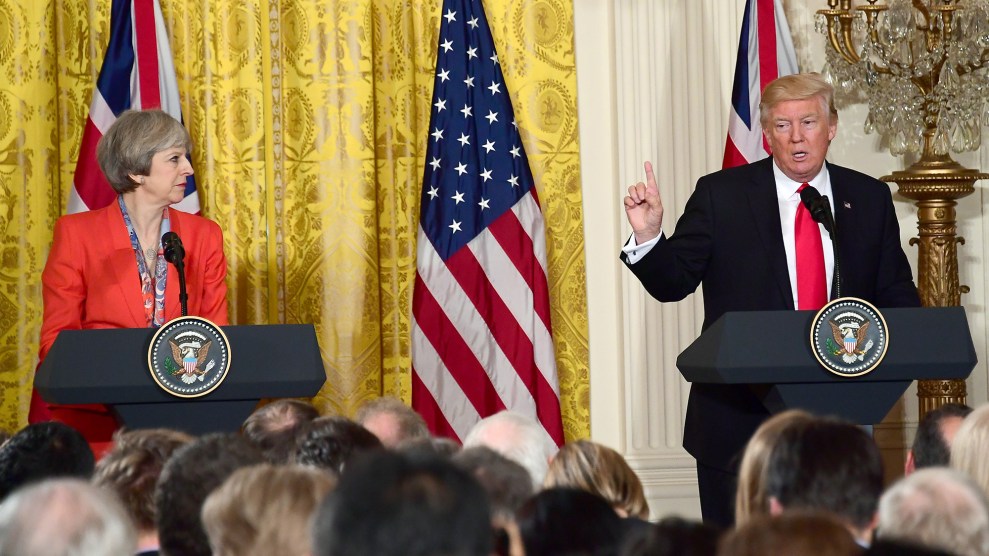 Throughout his presidential campaign, Donald Trump repeatedly said that torture works, and that should he enter the White House he would utilize techniques such as waterboarding and “much worse” against ISIS fighters. But at a short press conference with UK Prime Minister Theresa May on Friday, Trump said that though he still thinks torture “works,” he will allow newly confirmed Secretary of Defense Gen. James Mattis to “override” him on this point.

Trump was questioned about his views on torture and other controversial matters by a BBC reporter, who asked, “Mr. President, you’ve said before that torture works, you’ve praised Russia, you’ve said you want to ban some Muslims from coming to America, you’ve suggested there should be punishment for abortion. For many people in Britain, those sound like alarming beliefs. What do you say to our viewers at home who are worried about some of your views and worried about you becoming the leader of the free world?”

In typical Trumpian fashion, the new president lashed out at the slightest bit of media criticism. “This was your choice of a question,” he said, clearly perturbed. “There goes that relationship,” he darkly joked.

Once he turned to the substance of the question, Trump said he would let Mattis make the decision about the sort of interrogation techniques used by the United States. Mattis has long been opposed to torture, fighting back against “enhanced interrogation” during George W. Bush’s presidency. He reaffirmed that view at his Senate confirmation hearing earlier this month, and the Pentagon once again reiterated its opposition to techniques such as waterboarding earlier this week. During Friday’s press conference, Trump noted that he doesn’t concur with Mattis’ views on torture. “[Mattis] has stated publicly that he does not necessarily believe in torture,” Trump said, “or waterboarding, or however you want to define it—’enhanced interrogation’ I guess would be words that a lot of people like to use. I don’t necessarily agree, but I would tell you that he will override, because I am giving him that power. He’s an expert, he’s highly respected.” Trump added, “I happen to feel that it does work—I’ve been open about that for a long period of time. But I am going with our leaders. And we’re going to win, with or without, but I do disagree.”

During the presidential campaign, Trump repeatedly vowed to resurrect interrogation techniques such as waterboarding. During a February debate in New Hampshire, Trump said, “I would bring back waterboarding. And I’d bring back a hell of a lot worse than waterboarding.” He regularly complained that Barack Obama had weakened the United States’ ability to fight abroad by banning the use of torture. “Don’t tell me it doesn’t work—torture works,” he’s said.

Under the Geneva Conventions, torture is a war crime. Unlike the Bush administration—which at least cloaked its torture program under the Orwellian term of “enhanced interrogation” to duck international laws—Trump isn’t trying to obfuscate what he believes.

Even if the country isn’t about to revive its torture program, it is noteworthy that the president of the United States said, during his first press conference since taking office one week ago, that if he had his druthers he’d order the nation’s military forces to commit war crimes.