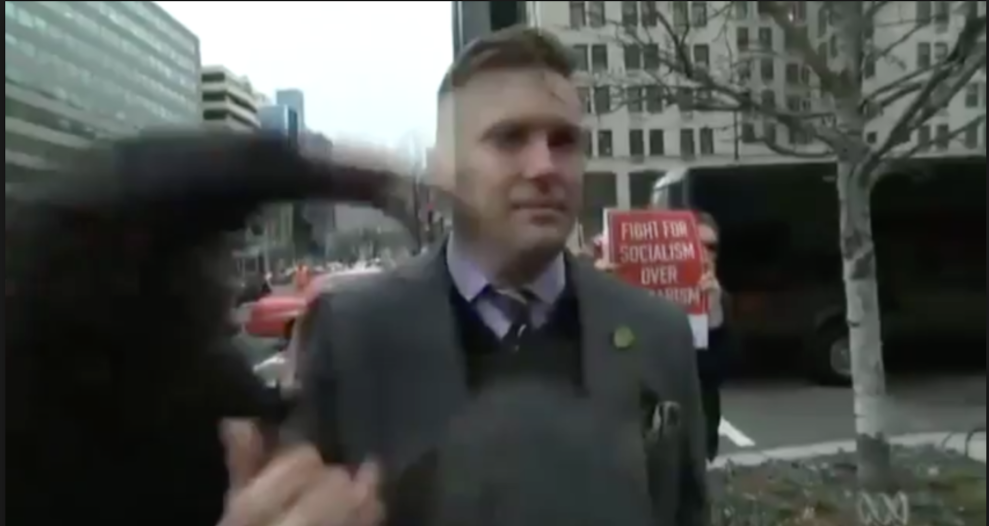 Screen shot from video of the incident

By now many have seen the video of an unidentified man punching white nationalist Richard Spencer in the face during inauguration weekend. Much in the way that the new president’s vicious campaign rhetoric gave voice to the deeper resentments of some of his supporters, the assault on Spencer seems to have offered a cathartic and even comedic outlet for those on the left who were angered by thoughts of Trumpians goose-stepping through the streets of DC as Trump entered the White House. Since the video emerged, social media users have set the footage to Bruce Springsteen’s “Born in the USA” and the Hamilton soundtrack, and comedian Tim Heidecker even wrote his own tune to celebrate the bashing. Former Obama speechwriter Jon Favreau tweeted, “I don’t care how many songs you set Richard Spencer being punched to, I’ll laugh at every one.” Journalists for the New York Times and other major outlets were soon mulling over the question at hand: “Is it OK to punch a Nazi?” A website, isitokaytopunchanazi.com, answered with a gleeful loop of the attack, with one neon-yellow word superimposed atop it: “Yes.”

Yet, this was more than just a morbid social-media sideshow: The attack on Spencer is part of a perennial conflict that may again be escalating. For decades, far-right extremists have faced the militant wrath of “antifas” (short for anti-fascists). With Trump’s campaign having summoned all sorts of white supremacists and other trolls from under their bridges, the old war—which I first got a front-row glimpse into a decade ago—appears ready to re-ignite.

This beef goes back to before World War II, when in Europe, a nascent authoritarian movement inspired by Hitler, Mussolini, and Francisco Franco squared off against a popular front coalition of liberals and radicals. At the Battle of Cable Street, in October 1936, Oswald Mosley brought 2,000 members of his British Union of Fascists to march through London’s Jewish East End neighborhood and 100,000 anti-fascists showed up to oppose them. In the resulting melee, Jews, Irishmen, Communists, anarchists, and socialists beat Mosley’s men with sticks, rocks, and sawed-off chair-legs. Local women dumped their chamber pots out of windows onto the heads of Mosley’s men.

Similar conflicts played out several decades later in America. In 1979, in Greensboro, North Carolina, the Communist Workers Party organized a rally called “Death to the Klan.” TV crews filmed as a nine-car caravan of Klansmen and neo-Nazis suddenly showed up and shot at marchers, murdering five participants, though no one was ever convicted of the crime. (In 2014, one self-proclaimed participant, Frazier Glenn Miller, went on a shooting spree at a Jewish cultural center in Kansas, murdering three people. The 74-year-old had just been diagnosed with lung cancer; he said that he “wanted to make damned sure I killed some Jews or attacked the Jews before I died.”)

In 1983, a street gang in Minneapolis named the Baldies began committing what they described as “righteous violence”—a term apocryphally attributed to Henry David Thoreau to describe John Brown’s attack at Harpers Ferry—against neo-Nazis who had started to appear in the city. The Baldies and their opponents both adopted the fashion of British punks—bomber jackets, bald heads, boots and braces—and kicked the Nazis, quite literally, out of town. On one occasion they even collaborated with now Congressman Keith Ellison, then a law student at the University of Minnesota, to lead a protest. “I remember he and the rest of the [Black Law Student Association] were friendly with us,” a founder of the Baldies told the Minneapolis City Pages. “I think they were just intrigued because we were so young and because we were anti-racist skinheads, which was weird to them.”

The battles in the Twin Cities were followed by a wider spread of neo-Nazi violence. In 1988, three members of a gang called White Aryan Resistance beat a 28-year-old Ethiopian student named Mulugata Serew to death in Portland, Oregon. In 1998, skinheads murdered Daniel Shearsty and Spit Newburn, a pair of anti-racists and best friends from Las Vegas—one black, one a white Marine—in the Nevada desert. The next year, a member of the racist cult World Church of the Creator went on a shooting spree in Indiana, gunning down nine Orthodox Jews, an African-American man, and a Korean graduate student before killing himself.

Anti-fascist groups like Anti-Racist Action, Skinheads Against Racial Prejudice, and the Love and Rage Anarchist Federation fought back. Their members advocated “direct action” against white supremacists, eschewing legislative efforts in favor of physically preventing Nazis from organizing, distributing literature, and speaking in public. To their supporters, these groups merged the moralism of America’s abolitionist tradition with the nihilism of punk rock, and boiled the culture wars down to their most primal element: vicious brawls over racism, sexism, and homophobia. The logic of their direct action was that, if a white-supremacist leader inspired someone to commit a hate crime, police couldn’t intervene until after a violent action had taken place. Anti-fascists wouldn’t wait. “Racism is an idea,” one anonymous ARA member said in the 2000 documentary Invisible Revolution, but “fascism is an idea mixed with action. It took fascism to establish Jim Crow and before that, slavery….Anti-Semitism has been around a long time but it took fascism to [make] the Holocaust….When you cross that threshold, you negate your rights to a calm, collective conversation.”

Everyone laughed as Joe pantomimed his victory over the man by stomping the floor of the kitchen with his steel-toe combat boots: “How does it feel to get your head kicked in by a faggot?”

My own introduction to what anti-fascism looked like took place in South Philadelphia in 2004, where I attended a house party arranged around a half-keg of High Life in the kitchen. At the center of the gathered crew of mohawked kids was a man named Joe, whose skinny crimson suspenders strained over a swell of jiggling belly. A leader of ARA’s Philadelphia chapter, Joe regaled us with a story about a stranger in a pub who’d once called him a faggot. “So I grabbed this motherfucker by the collar,” he said, “and I dragged him outside.” In the parking lot, Joe explained, he beat the man unconscious. The tale was horrific. But it was also surprising—because Joe was gay, it turned out, as were many of his Philly ARA comrades. He wasn’t insulted by being called a faggot; he was insulted that someone would think there was anything wrong with being one.

“How does it feel!” Joe thundered, when he’d gotten to the climax of his yarn, in which he knocked his antagonist down and kicked him in the head repeatedly. Everyone laughed as Joe pantomimed his victory over the man by stomping the floor of the kitchen with his steel-toe combat boots: “How does it feel to get your head kicked in by a faggot?”

With the dawn of the Trump era, the Joes of the country may be stirring, and Spencer and his fans seem to sense it. On Tuesday, Spencer’s supporters offered a $3,000 bounty to anyone who could identify the alt-right leader’s assailant, and Spencer called for the formation of alt-right vigilante squads to prevent future attacks. “The ANTIFA thug who violently assaulted Spencer hid his face behind a mask,” an anonymous commenter said, “but some think they caught a glimpse of his face. There’s not much to go on—but let’s identify the ANTIFA criminal who punched Richard Spencer.”

Meanwhile, the same day that Spencer was assaulted, a 25-year-old anti-fascist was shot in the stomach during an inauguration protest at the University of Washington, allegedly by an alt-right sympathizer. New groups adopting an anti-fascist outlook such as Redneck Revolt, John Brown Militia, and the Bastards Motorcycle Club appear poised to revive the direct-action tactics of the 1980s and ’90s in order to confront white supremacists emboldened by Trump. Anti-Racist Action’s 20 or so chapters around the country have also promised to join the fray. The day after the inauguration, ARA’s branch in Louisville, Kentucky, posted on their website:

For decades, [white supremacists] were the face of the enemy and only a minute few dared show their true colors in public. This made them easy to dismiss, easy to ignore…However, recent events have proven that the fascist ideology has not only survived but thrived…Now, their labors of hatred have been rewarded with a sympathetic President-Elect and a federal Congress that is, at best, indifferent to their evil.

A warning to those who wish to destroy what we hold dear; We will resist you in the streets, in the poll booths and in the townhouses. Whether it’s in the bars, the concert halls, the conference centers or even City Hall, we will not allow a platform for your dangerous and divisive ideas. We will not allow history to repeat itself. We will shut you down everywhere you go. We will block your marches. We will interrupt your speeches. We will protest your legislation. We will be the thorn in your side. The glass in your bread. The pain in your ass.

Trump’s presidency is already promising to turn back the clock on American progress in multiple ways, with women’s rights, racial justice, and environmental protections under siege. The return of the war between fascists and anti-fascists is another expression of our current political atavism. This time, given a uniquely pugilistic president of the United States, the battle may rage hotter than ever.

This story has been corrected to reflect the year the Baldies were formed.