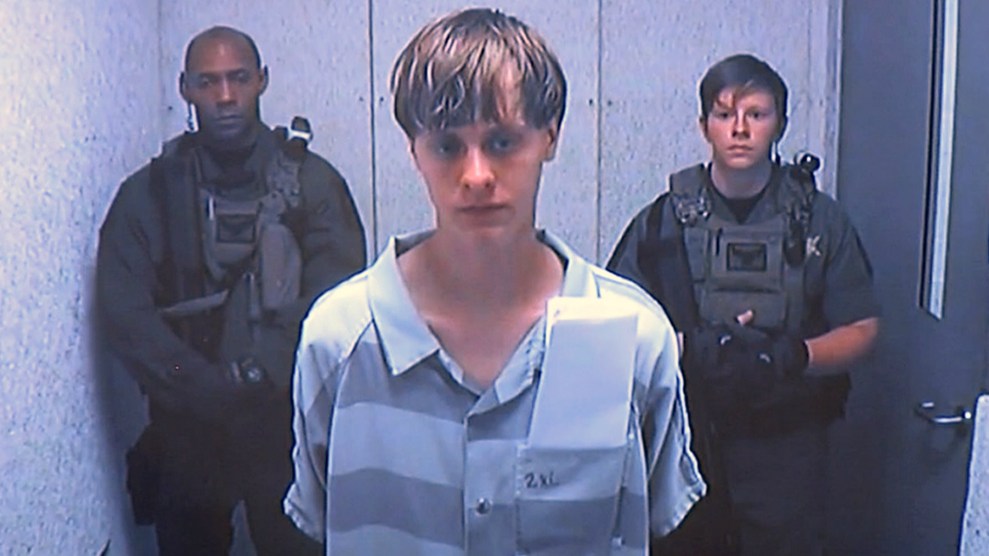 On June 17, 2015, Dylann Roof entered a historic black church in Charleston, South Carolina, and shot and killed nine worshippers after reading Bible verses with them. As it was later revealed, the 22-year-old Roof was a white supremacist. After an eight-day trial in the Charleston federal district court, on December 15 the jury found Roof guilty of all 33 federal counts—including hate crimes and obstruction of exercise of religion—18 of which carry the federal death penalty. This week, after less than three hours of deliberation, the jury sentenced Roof to death, making him the 63rd person who will be held on federal death row.

Federal law classifies the jury’s decision as a binding “recommendation,” which means, according to Robert Dunham, the executive director of the Death Penalty Information Center, “there’s likely a decade worth of appeals.” Roof could be well into his 30s before he is executed.

He likely will not be executed at all, because a federal death sentence often does not result in a lethal injection. To be eligible for federal death row, the defendant’s crime has to have a national angle, such as bombing a federal building. Boston marathon bomber Dzhokhar Tsarnaev was sentenced to death in 2015 for his role in the 2013 attack, but his appeals process is likely to extend for years. Today, 23 people on death row have exhausted their appeals and are eligible to be executed. Three co-defendants who have been on federal death row for the longest period of time were convicted in a series of drug-related murders: Richard Tipton, Corey Johnson, and James H. Roane Jr. have been awaiting execution since 1993.

Contrast this with executions on the state level. Between 1988, when the federal death penalty was reinstated, and 2016, the government only put three inmates to death. States have carried out 1,439 executions since the Supreme Court ruled in 1976 that capital punishment does not violate the Constitution. Gulf War veteran Louis Jones Jr. was the last person to be executed by the government, in 2003, for the kidnapping, rape, and murder of 19-year-old Tracie McBride. His was a federal case because the 1995 crime took place on the federal property of a US Air Force base.

There have been no federal executions during President Barack Obama’s two terms. Obama’s efforts to reduce the federal prison population during his presidency and his discomfort with the death penalty, which he described as “deeply troubling,” coincided with the long appeals process and recent questions about the efficacy of lethal injection drugs. The effect was a halt to federal executions. Nationwide support for capital punishment has been dropping steadily over the last two decades. Today, only 49 percent of Americans support the death penalty for murderers, down from 80 percent in 1994. Among Republican voters, however, 72 percent support the death penalty for violent murderers.

President-elect Donald Trump is one of those death penalty supporters. On the campaign trail in December 2015, Trump announced that as president, he would sign an executive order mandating the death penalty for convicted cop killers. As attorney general, Jeff Sessions—who has supported the death penalty—could move this pledge forward by addressing a number of institutional and practical problems that have been obstacles to federal executions.

“It takes a long time and it takes a lot of money to execute folks,” says Monica Foster, a lawyer whose clients include defendants on federal death row. The average cost of defending a federal death penalty case is $620,932. Inmates typically spend more than a decade in the appeals process before entering death row and awaiting execution.

Opponents of capital punishment believe that it’s immoral, racially biased, and not a deterrent for crime. Sixty-two percent of those awaiting death in federal prisons are nonwhite. “The federal death penalty reflects the state penalty system’s problems of racial bias, poor lawyering, and unreliable evidence,” says Miriam Gohora, a law professor at Yale Law School. But Trump’s pick for attorney general disagrees. At a 2001 congressional hearing on racial and geographic disparities in the federal death penalty, Sessions stated he was against a moratorium on the federal death penalty for several reasons, one of them being that “the death penalty deters murder, as studies as recent as this year have found.” A 2008 Death Penalty Information Center survey published in 2009 found that 88 percent of criminologists do not consider the death penalty a deterrent to violent crime.

“I would expect that the incoming administration would be more aggressive in seeking the federal death penalty,” says William Otis a professor of law at Georgetown law school.

If the Trump administration wanted to aggressively pursue the death penalty and carry out more executions, it would have to address the issue of lethal injection drugs. In 2011, the only American manufacturer of lethal injection drugs, Hospira, announced it would no longer produce sodium thiopental, a key ingredient in the serum used to carry out executions. The company originally intended to resume production at its Italian plant, but Italian officials refused to export the drug if it were to be used for executions. Other companies followed suit, leading to a massive shortage. Many states and the federal government were left with no method of execution, forcing a lull in carrying out capital punishments.

Some states sought to use different drug combinations that haven’t been widely tested. In Oklahoma, a new drug combination led to the botched execution in 2014 of Clayton Lockett, who writhed and moaned during the procedure. In the wake of this incident, Obama announced that the government, through the Department of Justice, would be reviewing its death penalty protocols leading to an effective moratorium. The move was considered a victory for opponents of the death penalty.

The state of Texas recently sued the Food and Drug Administration over the withholding of a shipment of lethal injection drugs that the FDA maintains are illegal to import because they haven’t been tested for safety. “Drugs used in executions are not supposed to be safe—they’re supposed to be lethal,” Otis says, adding that the safety requirements would likely be one of the first areas the Trump administration might seek to change.

In death penalty cases like Dylann Roof’s, where there is no question about guilt or innocence, opponents of capital punishment believe that a life sentence without the chance of parole would provide justice. Roof wanted to plead guilty in exchange for a life sentence, but federal officials rejected the offer. Many family members of the victims opposed the death penalty for Roof. The morning after the jury decided on its verdict, Judge Richard Gergel formally sentenced Roof to death, saying, “This trial has produced no winners, only losers.”