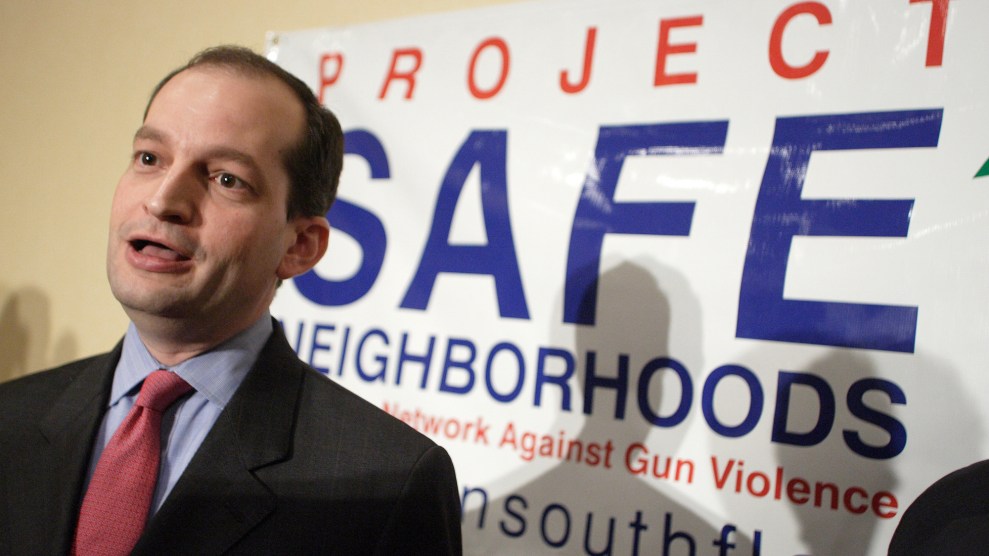 Lawyer and law-school dean Alex Acosta, President Donald Trump’s second choice to head the Department of Labor, doesn’t carry the epic baggage of Andrew Puzder, the burger magnate who dropped out of consideration for the post amid allegations of spousal abuse. Unlike Puzder, Acosta has never publicly thundered against raising the minimum wage; nor does he run a fast-food chain with disaffected former workers willing to complain to Congress.

One former NLRB colleague of Acosta’s predicted that Acosta will “make informed decisions,” even if they’re “not always to the liking of the labor movement.”

Acosta has drawn fire for his stint during the George W. Bush’s Justice Department as assistant attorney general at the Civil Rights Division from 2003 to 2005, when he presided over a scandal involving an underling who hired staffers ideologically hostile to the division’s mission. My colleague Edwin Rios has the details.

While that Civil Rights Division episode casts doubt on Acosta’s ability to ensure an important federal agency fulfills its intended role, he also has experience directly relevant to the position he has been appointed to. For about eight months starting in December 2002, Acosta served as a Bush appointee to the National Labor Relations Board, the independent federal agency that exists to “safeguard employees’ rights to organize” and “prevent and remedy unfair labor practices committed by private sector employers and unions.”

He took that post after working as an attorney for Kirkland & Ellis, a prominent law firm that represents employers in labor disputes, where he “specialized in employment and labor issues,” his bio states. In other words, he was a labor lawyer who represented bosses, not workers. Before that, he clerked for Samuel A. Alito, Jr., then a judge on the US Court of Appeals, now a staunch conservative on the Supreme Court.

One federal official who’s familiar with Acosta’s time at the NLRB is Tammy McCutchen, who now represents employers in wage disputes and who served as in Department of Labor’s wage and hour division under George W. Bush. She recently told Bloomberg News that Acosta is “intense, hardworking, but I think in contrast to Puzder, he’s going to get things done more quietly,” adding that, “He will be quietly efficient. I don’t think you’ll see a lot of difference in his policy positions from Puzder.”

McCutchen didn’t respond to my requests for further comment. But I did talk to Wilma Liebman, whose long stint on the NLRB—she served from 1997 to 2011—overlapped with Acosta’s short one. Liebman, a Democrat, has impeccable pro-labor credentials—she was chief counsel to two major unions before joining the NLRB, and serves on the board of the Economic Policy Institute, a think-tank founded to “include the needs of low- and middle-income workers in economic policy discussions.”

“I liked him—we worked well together, he was a very good colleague,” she said. While they occasionally came down on opposite sides of cases, she added, Acosta was “independent—he sometimes voted with me and the other Democrat on the board at the time.” She called him “very intelligent and open to listening to all sides.” She predicted that if, as expected, he’s approved as labor chief, Acosta will “make informed decisions,” even if they’re “not always to the liking of the labor movement.” She added a caveat: “It remains to be seen how independent he’ll actually be able to be from the White House.”

Her view jibes with that of the legal trade publication Law360, which recently wrote that during his time at the NLRB, Acosta “exhibited an independent and nonpartisan approach toward evaluating cases, voting alongside fellow Republicans in favor of employers in key cases while also not shying from occasionally siding with unions.”

The publication listed “6 Acosta NLRB Opinions Employers Need To See,” and they are indeed a mixed bag. In one case, Law360 notes, Acosta and GOP colleagues beat back a Democratic dissent to side in Walmart’s favor in dispute with the United Food and Commercial Workers International over claims Walmart had interfered in efforts to promote union membership.

And in a case that might raise the eyebrow of his likely new boss, Acosta and colleagues ruled against a company “accused of illegally firing eight Somalian immigrants who walked off their assembly line to protest the company’s decision to deny them a scheduled work break,” Law360 reports.

Meanwhile, the conservative legal blogger Paul Mirengoff denounced Trump’s pick, declaring Acosta “unfortunately … vastly more appealing to the left” than Puzder was. Mirengoff didn’t have much to say on Acosta’s NLRB stint; he focused his complaints on Acosta’s past support of the very kind of immigration reform now being demonized by Trump; and Acosta’s time at the Department of Justice, where, Mirengoff insists, Acosta indulged civil rights groups at the expense of GOP political interests.

All in all, Acosta seems like much more of a plain-vanilla Republican than Trump’s flamboyant first choice to shape US labor policy.