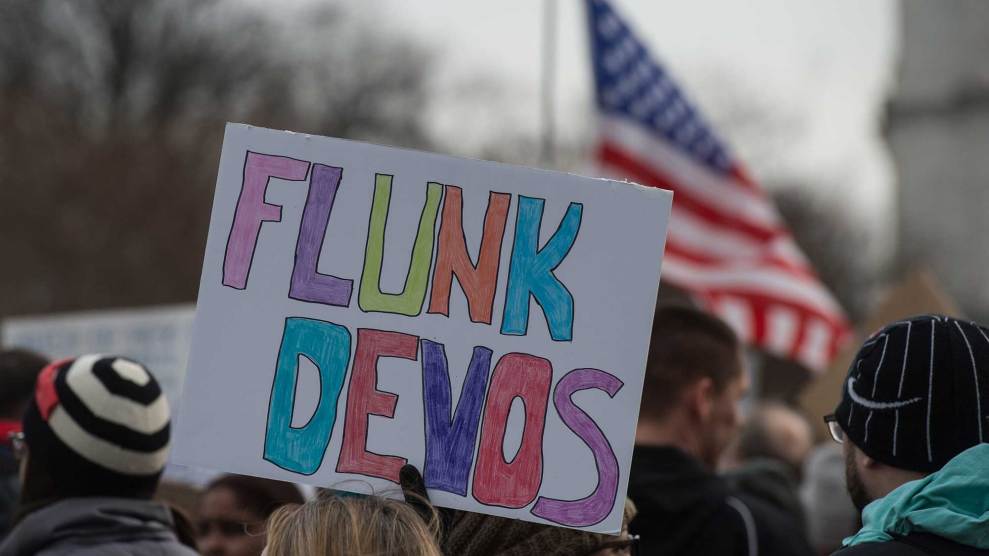 Despite an avalanche of emails and calls flooding Capitol Hill in the past two weeks, the Senate confirmed Betsy DeVos on Tuesday as the next secretary of education. With Republican Sens. Susan Collins of Maine and Lisa Murkowski of Alaska voting against DeVos, Vice President Mike Pence had to be dispatched to cast the tie-breaking vote. No education secretary nominee has ever faced a vote this close, and no other nominee needed a vice president to break the tie.

Over the past two months, I’ve been digging into DeVos’ record on education—particularly her connection to vouchers and her contributions to private, religious schools. Here are three things to keep in mind about Trump’s new education boss:

DeVos enters the office as one of the most unpopular nominees for the nation’s top job in education.

Among all Trump’s nominees, DeVos faced the most vocal opposition from parents, educators, and activists. They seemed to particularly rally around the nominee’s lackluster performance during confirmation hearings, including her minimal knowledge about the federal laws enforced by the department, such as those protecting students with disabilities. Opponents were also troubled by DeVos’ history of pushing public school dollars to private and religious schools.

Teachers unions, civil rights activists, and other opponents sent more than a million emails and made tens of thousands of phone calls to congressional offices in the last two weeks to oppose DeVos’ confirmation. Heidi Hess, who runs political campaigns for CREDO, a mobile company that supports activism projects, told NPR that DeVos enraged their members more than any other nominee, which resulted in a record 1.5 million petition signatures and 30,000 phone calls. Sen. Brian Schatz (D-Hawaii) tweeted on February 2 that the previous three days had “been the busiest in Capitol switchboard history” by “almost double.”

DeVos’ philanthropic record speaks volumes about how she might implement Trump’s vision of “school choice.”

DeVos is a daughter of privilege who was raised in the tradition of the Christian Reformed Church, a conservative Dutch Calvinist denomination, and she’s married to Richard (Dick) DeVos Jr., whose billionaire father, Richard Sr., co-founded the multilevel-marketing empire Amway. While the DeVoses aren’t as well known as, say, the Koch brothers, they played a key role in building the modern conservative movement and pushing the Republican Party further to the right.

And then there’s DeVos’ long support of vouchers for private, religious schools; conservative Christian groups like the Foundation for Traditional Values, which has pushed to breach the wall between church and state; and organizations like Michigan’s Macinac Center for Public Policy, which has championed the privatization of education system.

As I wrote in our recent investigation, DeVos-funded organizations include:

Additionally, Betsy DeVos has spent at least two decades pushing taxpayer-funded vouchers for private schools to the center of the Republican Party’s education agenda, thanks in large part to Michigan’s Mackinac Center for Public Policy. As our investigation found:

In the mid-’90s, Mackinac leadership suggested a long-term strategy on how to make unpopular voucher policies more palatable for mainstream America. Its then-senior vice president, Joseph Overton, developed what became known as the Overton Window, a theory of how a policy that’s initially considered extreme might over time be normalized through gradual shifts in public opinion. Education policies were placed on a liberal-conservative continuum, with the far left representing “Compulsory indoctrination in government schools” and the far right representing “No government schools.”

Charter schools, then, became a Trojan horse for voucher advocates: Once public school supporters got used to the idea of charters, activists would attempt to nudge public opinion closer to supporting tax credits to pay for private schools. In Michigan, Detroit has been at the heart of the charter push, which began when Gov. John Engler signed charter schools into law in 1993. Three years later, then-Detroit Metro Times reporter Curt Guyette showed how the Prince Foundation, as well as the foundation run by Dick DeVos’ parents, funded a carefully orchestrated campaign to label Detroit’s public schools as failing—and pushed for charters and “universal educational choice” as a better alternative. Betsy DeVos has since written about the need to “retire” and “replace” Detroit’s public school system and pressed for expanding charter schools and vouchers.

Critics argue that this is an attempt to expand the definition of “school choice”—typically understood as giving parents the ability to pick any traditional public school or charter school in a district—to allow taxpayer money to follow students to any private school via vouchers. Some critics of school choice argue that charters, which are publicly funded but governed by appointed boards and often run by private companies with varying degrees of state oversight, can skim high-performing students from traditional public schools, leaving them with more high-needs kids and less money. But the push for so-called “universal school choice” could take that a step further by eventually leading to a radical redirection of funds from traditional public schools to private schools, many of which are Christian.

What can DeVos accomplish in the next four years?

Trump’s signature education proposal calls for dedicating $20 billion in federal money to help families move away from what he has called our “failing government schools” and instead choose charter, private, or religious schools. To do that, Trump could create an incentive program to encourage states to allow vouchers, lift caps on charter schools, and decrease state oversight over what kind of charter schools can be open and how they operate. In DeVos, he found a partner who has spent the past two decades doing just that in Michigan, as we recently documented.

Michigan now serves as one of the most prominent examples of what aggressive, DeVos-style school choice policies look like on the ground, especially when it comes to expanding charters. About 80 percent of the state’s charter schools are run by for-profit companies—a much higher share than anywhere else in the country—with little oversight from the state. In 2011, DeVos fought against legislation to stop low-performing charter schools from expanding, and later she and her husband funded legislators who opposed a proposal to add new oversight for Detroit’s charters.

Detroit, in particular, provides a cautionary tale of what happens when the ideology of market-driven “school choice” trumps the focus on student outcomes. The city’s schools—where 83 percent of students are black and 74 percent are poor—have been in steady decline since charter schools started proliferating: Public school test scores in math and reading on the National Assessment of Educational Progress have remained the worst among large cities since 2009. In June, the New York Times published a scathing investigation of the city’s school district, which has the second-biggest share of students in charters in America. (New Orleans is No. 1.) Reporter Kate Zernike concluded that lax oversight by the state and insufficiently regulated growth—including too many agencies that are allowed to open new charter schools—contributed to a chaotic system marked by “lots of choice, with no good choice.”

A 2015 study from Michigan State University’s Education Policy Center found that a high percentage of charter schools also had a devastating impact on the finances of poor Michigan school districts like Detroit. Researchers reported that, under the state’s school choice and finance laws, it was hard for districts to keep traditional public schools afloat when charters reached 20 percent or more of enrollment. While per-student public funding follows kids to charters or other districts, traditional public schools still have fixed costs to cover, like building expenses and faculty salaries. Charter growth also increased the share of special-needs students left behind in traditional public schools, and the extra costs for educating such students weren’t adequately reimbursed by the state.

Charter schools and school choice are now accepted by nearly two-thirds of Americans, but almost 70 percent still oppose using public funding for private schools. With most states under wholly Republican leadership, though, and big-name charter advocates like former DC Public Schools Chancellor Michelle Rhee now in support of sending public dollars to religious schools, the stage is set for a new effort to both lift state caps on charter schools (22 states have some kind of cap limiting the number of charters) and expand vouchers (14 states and the District of Columbia have active programs).

It’s hard to tell how many more charter advocates will support (or simply overlook) the inclusion of vouchers for private schools in choice policies, but one thing is clear: The prospects for an aggressive policy push for “universal choice”—including funding more religious schools with taxpayer money—have never been better.