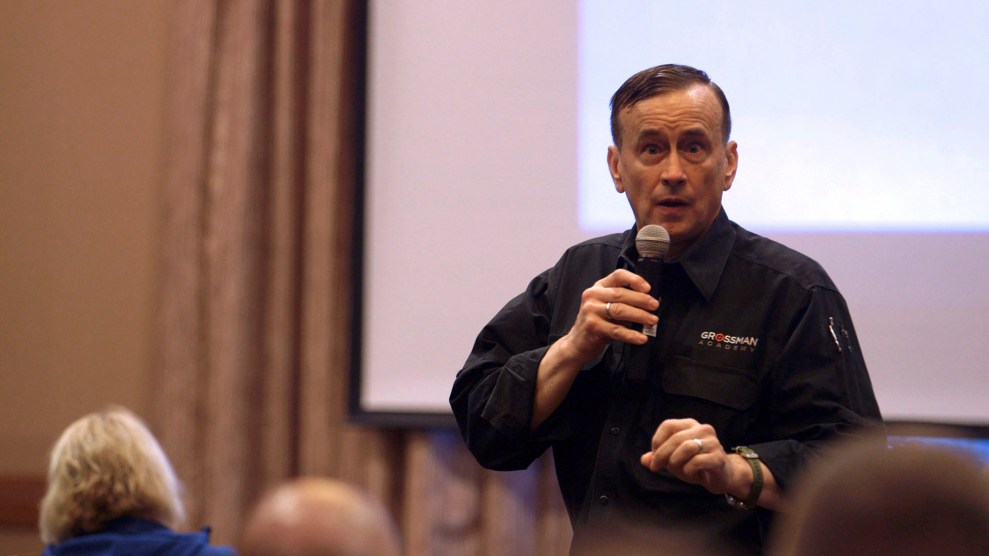 Also read: “Are You Prepared to Kill Somebody?” Meet one of America’s leading police trainers.

Marching around the stage in a theater in Lakeport, California, Lt. Colonel Dave Grossman tells his audience that they shouldn’t go out looking for people to kill, because those who need killing—the “gangbangers,” terrorists, and mass murderers—will come to them. All they need to do is be ready. “Are you prepared to kill somebody?” he asks me and the small group of “armed citizens” who’ve paid $90 or more to see him. “If you cannot answer that question, you should not be carrying a gun.”

Two hours into his high-octane, six-hour seminar, the self-described top police trainer in the nation is just getting warmed up. Grossman, a 60-year-old former Army Ranger, wears low-slung blue jeans, an ornate Western belt buckle, and a black button-up emblazoned with the words “Grossman Academy,” the “O” stitched like a bull’s-eye. He sports a military haircut. Onstage are two giant easel pads, their legs taped to the floor so that they don’t go crashing down whenever he hits them to punctuate his points. “We fight violence. What do we fight it with? Superior violence. Righteous violence.” Like a preacher, he doesn’t bother with notes.

In the era of Black Lives Matter, Grossman insists that cops must be more, not less, prepared to use force.

Over the past two decades, Grossman has achieved semi-celebrity status as an authority on aggression, close combat, and the psychology of violence. He literally wrote the book on killing, On Killing. His books have been translated into several languages and he says they are required reading at the FBI Academy and many law enforcement academies. He’s lectured at West Point and claims to have conducted trainings for every federal law enforcement agency, every branch of the armed forces, and cops in all 50 states. For more than 19 years, he’s been on the road, leading seminars and trainings nearly 300 days a year. He has a black belt in Hojutsu, the Japanese art of shooting. (Grossman did not grant my request to attend one of his police trainings, nor did he agree to be interviewed.)

Grossman’s philosophy grew out of the two decades he says he spent training soldiers to kill more efficiently. The military has long taught its troops to kill through a process of conditioned response—aim, shoot, aim, shoot—that’s meant to override the part of the brain that asks, “Should I be doing this?” By refining this approach, Grossman and others claim, the US military boosted its kill ratio—the percentage of frontline soldiers who actually shoot to kill—from between 15 and 25 percent during World War II to as much as 100 percent during the Vietnam War. (These figures and the scholarship behind them have been fiercely debated.) Grossman takes this a step further. Rather than simply conditioning soldiers and police officers to shoot without hesitation, he teaches them to embrace their responsibility to kill. “Killing’s not the goal,” he cautioned in a 2004 interview with Frontline. “But we all understand that killing is the likely outcome.”

Grossman calls his discipline “killology“—”the scholarly study of the destructive act.” Though he spent years as a soldier, he has never killed anyone in combat. And while he is a luminary to many in law enforcement, the “warrior” mentality he espouses is under fire. As Black Lives Matter has exposed the prevalence of police abuses and the confrontational attitude that often sparks them, Grossman continues to insist that cops are the ones under siege and that they must be more, not less, prepared to use force. “The number of dead cops has exploded like nothing we have ever seen,” he tells the armed citizens in Lakeport. (That is not true: The average annual number of police officers intentionally killed while on duty in the past decade is 40 percent lower than it was in the 1980s.) If emergency medicine and body armor hadn’t improved since the 1970s, Grossman claims, “the number of dead cops would be eight times what it is” today. It’s not clear how he arrived at these figures.

Grossman says, “The number of dead cops has exploded like nothing we have ever seen.” That is not true.

Last summer, after a black man named Philando Castile was shot and killed during a traffic stop outside Minneapolis, it was revealed that two years earlier the officer, Jeronimo Yanez, had attended “The Bulletproof Warrior,” a two-day training taught by Grossman and his colleague Jim Glennon. Shortly after this came out, the sheriff of Santa Clara County, California, which includes San Jose, canceled an upcoming Grossman training, saying her officers were meant to be “peacemakers first and warriors second.”

Grossman’s trainings are “fear porn,” says Craig Atkinson, a filmmaker who attended one for his documentary on police militarization, Do Not Resist. He wonders how the Castile incident might have played out if Officer Yanez hadn’t heard “Dave Grossman tell him that every single traffic stop could be, might be, the last stop you ever make in your life.” Grossman is “more of a motivational speaker than a trainer,” says Seth Stoughton, a former cop and law professor at the University of South Carolina who studies the regulation of police. In Grossman’s worldview, Stoughton says, “the officer is the hero, the warrior, the noble figure who steps into dark situations where others fear to tread and brings order to a chaotic world, and who does so by imposing their will on the civilians they deal with.” This approach to policing is outdated and ineffective, says Stoughton, and, “some of it is dangerously wrong.” Samuel Walker, a criminal-justice professor and expert on police accountability, says the “Bulletproof Warrior” approach is “okay for Green Berets but unacceptable for domestic policing. The best police chiefs in the country don’t want anything to do with this.”

Glennon has said that the reporting on his and Grossman’s police seminars is inaccurate. “The word ‘warrior’ has been hijacked by people in order to prove their false thesis, that law enforcement officers are training like military warriors, which is to shoot first, ask questions later; that everybody’s out to kill you, so you better kill them first. And there is absolutely zero truth to that in our course, none,” he told a Minnesota newspaper after the Castile shooting.

The booklet Grossman hands out at his civilian training contains some of the same content that cops receive. There are charts and tables on “perceptual distortions in combat” and “combat efficiency.” A section titled “Thou Shalt Not Kill?” lists Bible verses that distinguish between justified killing and murder. Grossman does tell us that “oftentimes in police training, the right answer is not to shoot.” But he quickly pivots back to his message that right behind the police, gun owners are the “front-line troops” in his war. (The fact that there hasn’t been a homicide in rural Lakeport since 2002 doesn’t slow him down.)

“Hacking and stabbing little kids! When you hear about a day care massacre, tell them Grossman said it was coming!”

Onstage, Grossman comes off as both unglued and also quite sincere. He emphasizes the need for firearms training, and his voice cracks when he talks about the “slaughtered children” in school shootings. “This is not right. These are just kids,” he says. “Never lose your sense of outrage over this.”

But he also views the world as almost unrecognizably dangerous: a place where gang members seek to set records for killing cops, where a kid “in every school” is thinking about racking up “a body count.” His latest book, Assassination Generation, insists that violent video games are turning the nation’s youth into mass murderers. The recent wave of “massacres” is just the beginning. (“Please stop calling them mass shootings!”) He smacks the easels: “These [thump] crimes [thump] are [thump] everywhere!” He foresees attacks on school buses and day care centers. “Kindergartners run about point-five miles an hour and get a burst of about 20 yards and then they’re done.” It won’t just happen with guns, but with hammers, axes, hatchets, knives, and swords. His voice jumps an octave: “Hacking and stabbing little kids! You don’t think they’ll attack day cares? It’s already happening in China. When you hear about a day care massacre,” he shouts, “tell them Grossman said it was coming!”

That’s not the end of it. “More people are signing up with ISIS than we can count,” Grossman says. He predicts a terrorist organization will soon detonate a nuclear bomb off the West Coast. “We have never been more likely to be nuked, and we have never been less prepared!” Terrorists will send “suicide bio-bombers” across the border to spread deadly diseases. “The day will come,” Grossman insists. “Folks, it is very, very bad out there!”

Grossman is already prepared for the worst—even in the quietest of moments. He tells us a story: One night he was walking with his three-year-old granddaughter and his German Shepard around a lake near where they live. He was armed, “of course,” with a gun and a knife. The sky darkened, and his granddaughter looked up. “There are scary things in the dark,” she said. Grossman chuckled. “Yeah,” he said. “It’s us.”